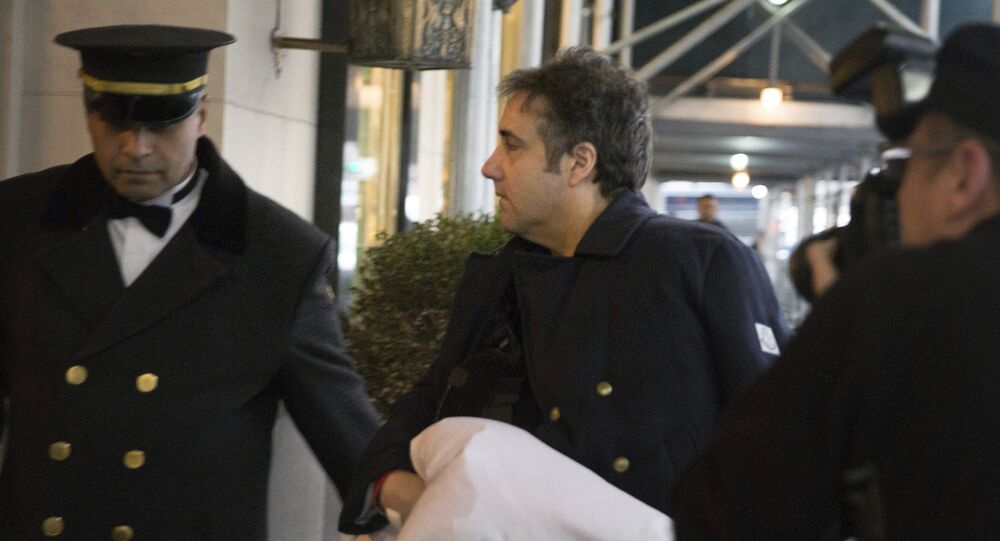 MOSCOW (Sputnik) - US President Donald Trump’s former personal lawyer Michael Cohen will provide specific evidence of crimes the president committed both before and after taking office during his upcoming public testimony before Congress, Politico media outlet reported on Wednesday, citing documents prepared for the testimony.

"Michael Cohen was one of many lawyers who represented me (unfortunately). He had other clients also. He was just disbarred by the State Supreme Court for lying & fraud. He did bad things unrelated to Trump. He is lying in order to reduce his prison time," Trump wrote on Twitter.

Earlier in the day, the Politico media outlet reported that Michael Cohen was set to provide specific evidence of crimes the president committed both before and after taking office during his upcoming public testimony before Congress.

The documents, obtained by the Politico media outlet, include one of 11 checks that Trump issued for Cohen in order to pay adult-film actress Stormy Daniels for her silence about her alleged affair with Trump during the 2016 presidential campaign. According to Cohen, the money came from the president's personal bank account.

According to the publication, Cohen will also tell Congress that Trump, during the campaign, was aware of the conversation that his ex-adviser Roger Stone had with WikiLeaks founder Julian Assange about the whistleblowing website's "drop of Democratic National Committee emails."

"In July 2016, days before the Democratic convention, I was in Mr. Trump’s office when his secretary announced that Roger Stone was on the phone. Mr. Trump put Mr. Stone on the speakerphone. Mr. Stone told Mr. Trump that he had just gotten off the phone with Julian Assange and that Mr. Assange told Mr. Stone that, within a couple of days, there would be a massive dump of emails that would damage [then-Democratic nominee] Hillary Clinton’s campaign. Mr. Trump responded by stating to the effect of 'wouldn’t that be great,'" Cohen's testimony said, as quoted by Politico.

In addition, Cohen will tell Congress about Trump being aware of the June 2016 meeting between his campaign officials and Russian lawyer Natalia Veselnitskaya, who allegedly had sensitive information about Clinton.

At the same time, Cohen admitted in his testimony that he did not have direct evidence of Trump campaign's collusion with Russia, only "suspicions."

READ MORE: Cohen Postpones Congressional Testimony Due to Threats to His Family — Counsel

© AP Photo / Charles Dharapak
'Not Accurate': Mueller Refutes BuzzFeed Cohen Scoop
Cohen is scheduled to deliver public testimony before the US House of Representative Committee on Oversight and Reform later on Wednesday. The following day, Cohen will appear in a closed session before the US House Intelligence Committee.

Cohen has been sentenced to a three-year prison term for tax fraud and crimes that involve hush-money payments to two women Trump allegedly had affairs with in violation of campaign finance laws, as well as lying to Congress. He remains out of prison to continue cooperating with Special Counsel Robert Mueller's probe into alleged Trump-Moscow collusion in the 2016 US presidential election, which has been denied both by the US president and Russian officials on numerous occasions.