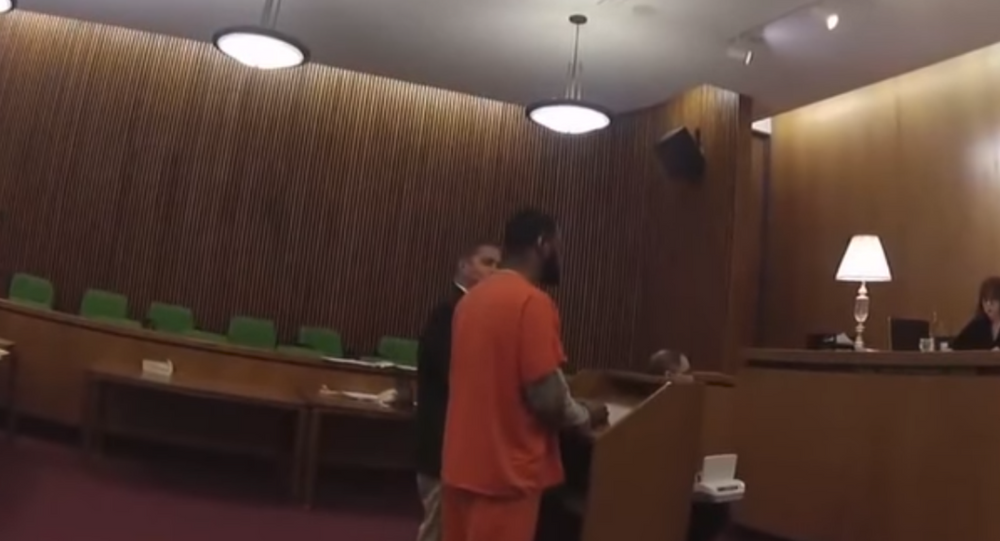 ‘He Just Snapped': US Man Beats Attorney After Getting Lengthy Prison Sentence

Ohio attorney Aaron Brockler was seeing stars earlier this week in the courtroom after his client, enraged over receiving a lengthy prison sentence, decided to take out his frustration by knocking the legal adviser unconscious.

The altercation unfolded on Tuesday just seconds after Common Pleas Court Judge Nancy Margaret Russo informed 42-year-old David Chislton that he would be serving 47 years in prison for charges related to a 2017 police standoff.

"He was hoping to get under 20 years," Brockler told the Washington Post. "And I think, when the judge said 47, he just snapped, and I was the closest person to him, and he let it out on me."

​Footage of the brutal beatdown begins with Chislton shaking his head multiple times upon hearing the judge's sentence, before suddenly throwing several punches at Brockler. The two-minute video, which was recorded by a Cuyahoga County sheriff's deputy's body camera, goes on to show the scuffle that ensued between Chislton and courtroom security staff.

Brockler, who landed underneath a courtroom table, sustained several injuries that included an injured hip, a broken nose and a concussion. "He definitely knocked me out… It took me back to my hockey days. It was just like getting hit in the head with a slap shot," he said.

The attorney later told local news station Fox 8 Cleveland's I-Team that just as the blow was coming to him, he was getting ready to tell Chislton that there were ways that the sentence could be reduced, and that he would explain those measures at a later time.

However, as video shows, Brockler never had the chance to do so.

In response to the attack, John Russo, the chief administrative judge for Cuyahoga County, called on the Cuyahoga County Sheriff's Department to launch an investigation into the incident and conduct a full review of safety protocols for court proceedings.

It's presently unclear why Chislton was handcuffed with his hands in front of him, when department policy indicates that inmates should be handcuffed with their hands behind their back.

Chislton's charges stemmed from a April 2017 altercation in which he pistol-whipped his partner and set his apartment complex on fire after he was accused of abusing a teenager, Cleveland.com reported. He was also accused of killing a dog.

Chislton later pleaded guilty to aggravated arson, felonious assault, domestic violence and cruelty against a companion animal. The Tuesday sentencing included a credit for the two years that he'd already spent in prison.

He is expected to see additional charges for the Tuesday attack.