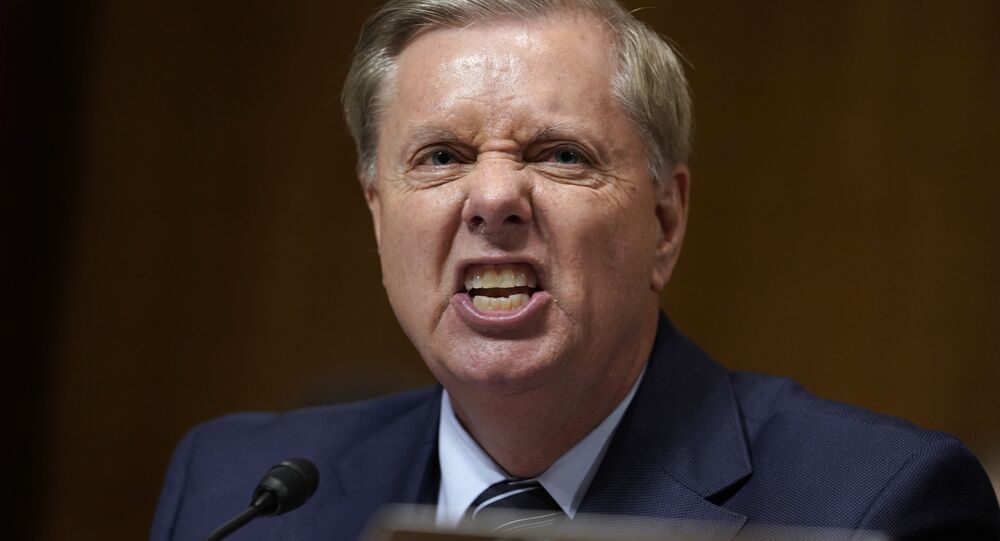 President Trump's announcement that the US would be withdrawing its entire contingent of 2,000 troops from Syria amid the defeat of Daesh (ISIS)* has shaken pro-war officials and lawmakers across Washington, prompting to a string of resignations of senior administration members, including (now-ex) Pentagon chief Jim Mattis.

Senior South Carolina Republican Senator Lindsey Graham, a long-time critic of Donald Trump's foreign policy, has lashed out at acting Defence Secretary Patrick Shanahan on the Pentagon's Syria policy. The Washington Post detailed the harsh exchange between Graham and Shanahan at the Munich Security Conference last week, which reportedly included the senator blasting the defence secretary on the US' 30 April withdrawal deadline.

"Are you telling our allies that we are going to go to zero by April 30th?" Graham reportedly asked. "Yes, that's been our direction [from the president]," Shanahan replied. "That's the dumbest f***ing idea I've ever heard," Graham responded.

© AFP 2020
Trump's Call to Bring EU Jihadists Home Sows Discord in Scandinavia
The Republican senator then began listing off a series of terrible consequences that a US withdrawal would mean, including the return of Daesh, Turkish forces attacking Syria's Kurds, and Iran gaining an 'advantage' in the country.

"That could very well happen," Shanahan reportedly replied. "Well, if the policy is going to be that we are leaving by 30 April, I am now your adversary, not your friend," Graham retorted.

Other lawmakers, both Republican and Democrat, reportedly voiced similar frustrations with Shanahan, describing him as a "deer in the headlights", and complaining that all he did was repeat the president's instructions, without elaborating.

© AP Photo / Mike Groll, File
US Using Choppers to Transport Syrian Gold Stashed by Daesh – Reports
New Jersey Democratic Senator Bob Menendez complained to WaPo that Shanahan basically "got a chorus of voices that basically said, 'This is not going to work, there is a bipartisan resolve not to let this happen, and you need to send a message back to the president that there's a combined, unified view that this is not the way to go and he should change course'."

Social media users were not amused by Senator Graham's expletive-filled rant, recalling his otherwise subservient attitude toward the president, or accusing him of being a war hawk.

It seems like Lindsey has a hissy fit nearly every day.

Did he happen to mention what a "win" in Syria looks like?

No, going into the Middle East all guns blazing was "the dumbest f***ing idea I've ever heard"

President Trump's announcement that the US would be withdrawing its forces from Syria was met with hostility among the majority of Republicans and Democrats in Congress, and led to a series of high profile resignations, including Defence Secretary Jim Mattis, special anti-Daesh coalition envoy Brett McGurks, DoD spokeswoman Dana White, and Pentagon Chief of Staff Kevin Sweeney.

While agreeing with the president on most domestic issues, Senator Graham has been a longtime critic of Trump on foreign policy. In early 2017, shortly after his election, Trump lashed out at Graham and (now deceased) Senator John McCain on Twitter, advising that the pair focus "their energies on ISIS, illegal immigration and border security instead of always looking to start World War III."

© AP Photo / Hassan Ammar
US Making Every Effort to Destroy Syria, Undermine its Infrastructure - Syrian Presidential Advisor
The Syrian government has repeatedly criticised the deployment of US troops on its soil, calling it an illegal violation of the country's territorial integrity, and demanding that Washington withdraw immediately. The US military presence presently includes a base in at-Tanf, along the Syrian-Jordanian border, and deployments in northeastern Syria alongside US-backed Syrian Kurdish militia.