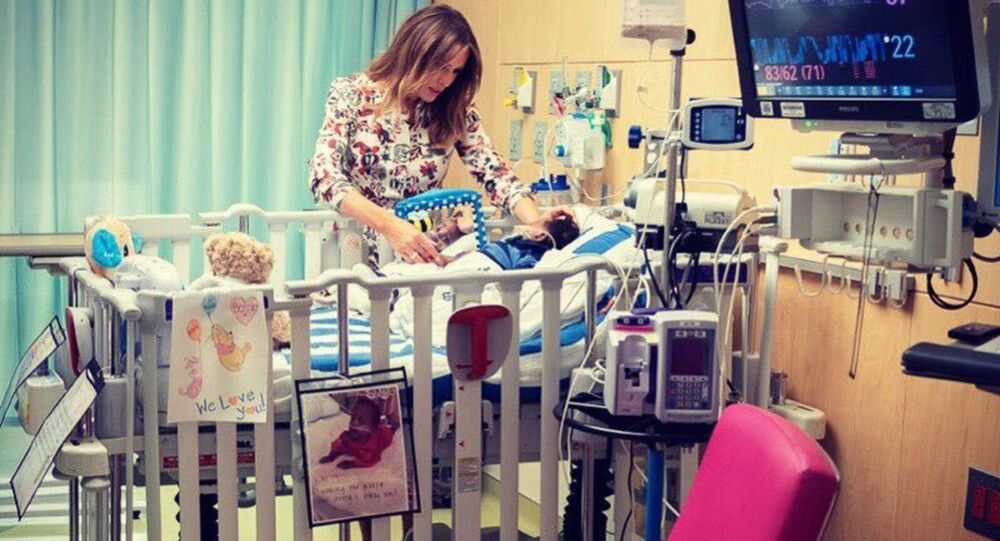 In keeping with her work as the first lady, Melania Trump visited Nicklaus Children's Hospital in Miami this week for the unveiling of a new healing garden and intensive care unit.

Melania, who champions the "Be Best" children's campaign, also met with some of the patients and their parents, but for the umpteenth time, social media reactions demonstrated a sharp split along political lines.

One naysayer called the first lady's visit "nothing more than a photo op", while another one joked that she could have used it as a pretext to escape from her husband.

@FLOTUS tried to #BeBest by visiting a children's hospital in Miami today. When one child overheard who the surprise guest would be, he turned to his mother and said, "I thought we already had robotics day here. I want Cardi B. @iamcardib."

Other commenters focused on Melania's floral dress. "Melania, why aren't you down there with the kids? Afraid they'll spit on your expensive dress?" jeered a user.

"Did Melania literally have her designer rip the fabric off the curtain rod from 1977 in order to make that dress?" wrote another commenter. "Ugliest dress ever. Yuck. Seriously. What the f**k is she wearing?"

Not everyone appeared to be that disgusted with Melania's visit to the hospital and fashion choices, with plenty of commenters praising her "very much needed work".

No, we finally have a classy First Lady in the White House instead of Big Mike the 8 long dreadful years prior.

We are so blessed to have such a wonderfully caring First Lady of the United States! 💘

Last year, US media ripped into her outfit choices and in an even more scathing attack on the FLOTUS, CNN contributor Kate Brower wrote that Melania "doesn't understand what it means to be first lady".