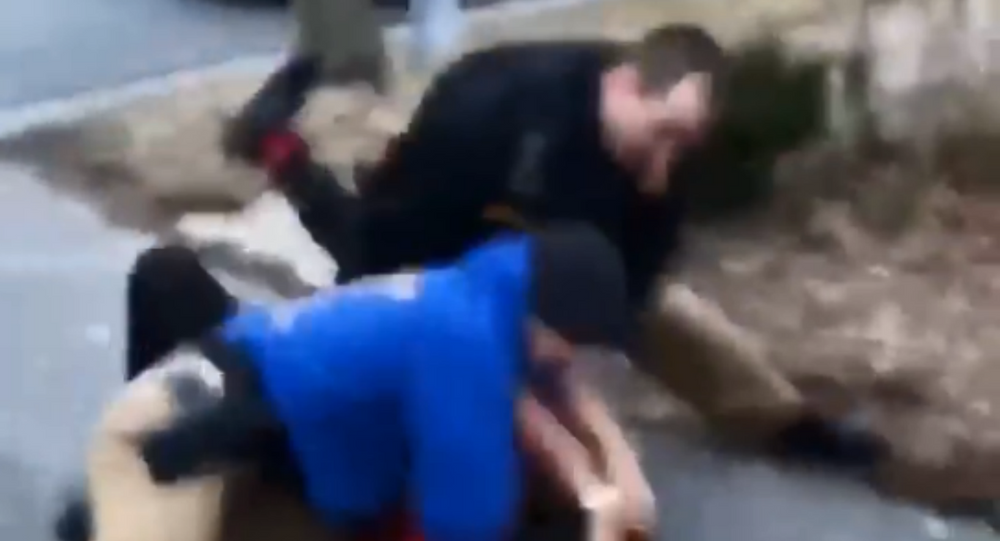 An investigation was launched this week by the Delaware Attorney General's Office into a recent incident in which a local police officer was filmed beating a teenager suspected of drug dealing.

The incident, which unfolded on Friday, began after officers with Delaware's New Castle County Police Department received complaints of drug dealing in the area. Officers later zeroed in on 16-year-old Roger Brown, who was thought to match the description of the wanted suspect.

Video footage of the altercation begins after an initial confrontation in which officers order Brown off of a dirt bike that he and his friend Jaiden Palmer were repairing in Brown's driveway. As Brown hopped off the bike to lean it against a tree, police tackled the teenager.

The recording, captured by Palmer, starts with Brown being pinned to the ground by one officer as another repeatedly punches him in the face. Individuals can be heard off-camera questioning why the offending officer is punching the teenager as police instruct Brown to "stop resisting."

Mary Fleming, Brown's mother, told the Delaware News Journal that officers later handcuffed her son and whisked him away from the scene in an ambulance.

Police have stated that they discovered "numerous" bags of marijuana, a digital scale, prescription pills and over $1,000 on Brown. The teen was charged with resisting arrest; manufacturing, delivering or possessing with intent to manufacture or deliver a controlled substance; offensive touching of an officer and other related charges.

After spending the weekend in jail, Brown was allowed to return home on Monday. Chris Johnson, Brown's lawyer, told the Journal that the 16-year-old Delawarean suffered a concussion during the arrest in addition to several bruises and cuts on his face.

Speaking to the investigation launched by the Attorney General's Office, the ACLU of Delaware issued a statement on Tuesday commending the move and calling on the New Castle County Police Department to suspend the officer seen punching Brown.

"We await the result of the investigation, but it is difficult to imagine circumstances that justify multiple officers pinning down a 16-year-old boy and punching him repeatedly in the face," reads the release.

"We applaud Roger's friend Jaiden for continuing to record this situation despite attempts by officers to get him to leave the scene. Recording the police is a First Amendment right."

New Castle County has also launched an internal investigation into the altercation. It's presently unclear if the officers, who appear to be in plain clothes, were wearing body cameras, which is a policy that the department adopted in 2015.

Suspect in Maryland Mass Shooting in Custody in Delaware - Police

Bomb Threats Made Against Jewish Centers in Delaware, Other US States

President Trump Traveled to Delaware for Return of US Commando's Remains