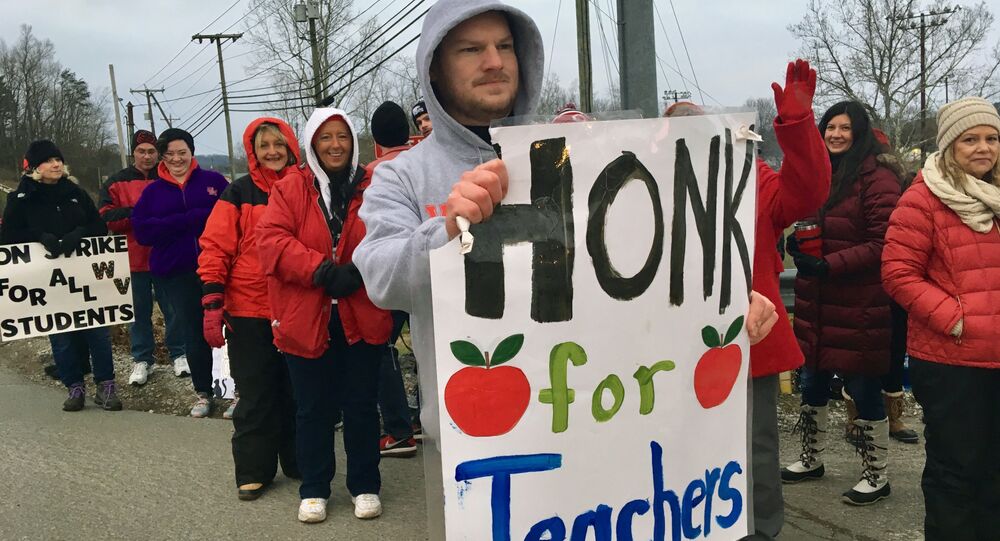 Just as West Virginia public school teachers were gearing up for another statewide strike, state lawmakers voted to table the bill the teachers were protesting. While the wave of US teacher strikes began in the state last year, Tuesday’s protest is now only the latest part of a tide of protesting educators nationwide.

© AP Photo / Jae C. Hong
‘The Time is Now’: Thousands of LA Teachers to Strike For Better Pay
Only hours into the demonstration Tuesday, with teachers in nearly all of West Virginia's 55 counties laying the final preparations for a strike, the state's House of Delegates suddenly voted to table the bill that had provoked their ire.

The Republican-led House of Delegates voted 53-45 Tuesday morning to indefinitely table a bill that sought to heavily expand the state's private charter school system, among other measures to which public school teachers objected. Charter schools have been lambasted as a privatization of education that seeks to undercut public school systems, which are paid for by taxation.

We aren’t using our inside voices. KILL THAT BILL. #55United #55Strong pic.twitter.com/32MolYvmZC

​"Our students are first and are not for sale," Poca High School English teacher Meghan Stevens told AP. "We believe in the power of public education."

Further, the teachers feel the bill both lacks their input and is also retaliation for last year's successful strike. Randi Weingarten, president of the nationwide American Federation of Teachers, tweeted Tuesday that the West Virginia Senate "is keen to destroy public schools & retaliate against its teachers."

A day of ups and downs.. in WVa —huge solidarity by educators at the Capital, then House of Delegates in bipartisan vote rebuffs retaliatory, anti public ed @gop Senate bill… then rumors of reconsideration, and now @WVGovernor Presser #55Strong @AFTWV @AFTunion pic.twitter.com/AYVtJ1uz72

​American Federation of Teachers West Virginia Chapter President Fred Albert said in a statement that "it was very clear today that the House heard our voice."

Cheers erupted from the galleries of the House in the state capital of Charleston as the vote was made, where hundreds of teachers had converged to protest the legislation.

However, the strike isn't officially called off yet. Three labor unions representing teachers and school service workers told AP they would be consulting with members before deciding on further action.

A year ago, West Virginia's teachers walked out of their schools as union negotiations collapsed, demanding better pay and better working conditions in their classrooms. For nine days they paralyzed the state's school system and mesmerized a nation unused to such widespread strike actions. When West Virginia Governor Jim Justice buckled under the pressure and granted all of the union's demands, it set off a wave of strikes by teachers across the country who are struggling under similar conditions.

Since then, the states of Oklahoma, Kentucky, Arizona and Washington, and the cities of Los Angeles and Denver have all seen similar strikes that yielded similar results. Many of the districts had not seen strikes by teachers in decades.

On Tuesday, the East Bay Times reported that California's Oakland Unified School District teachers were set to go on strike Thursday, feeling it is the "only option" left in their struggle for, better salaries for overworked teachers and improved budgets for underfunded student services.

Strike of Some 1,000 Workers Paralyzes Ports Across Sweden - Reports (PHOTO)