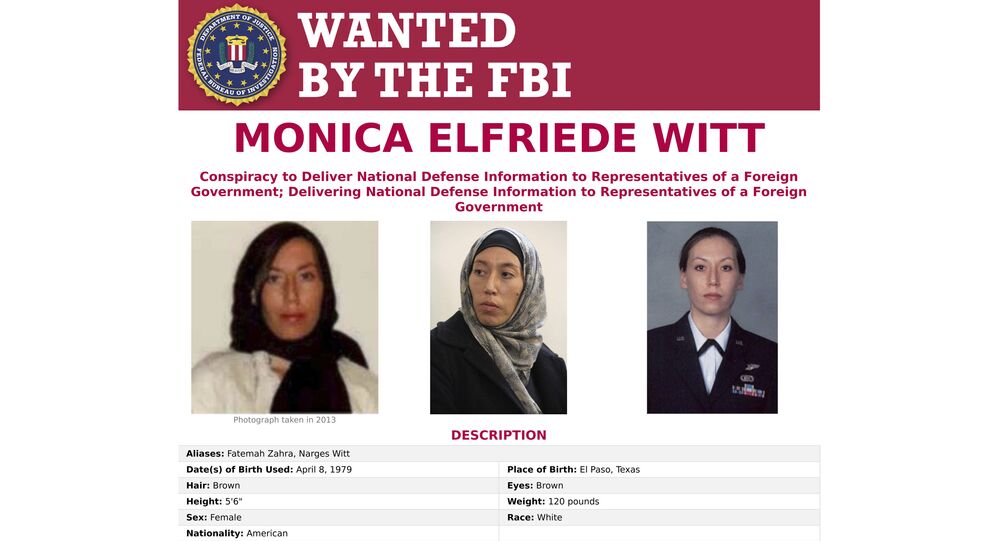 Last week, former US Air Force (USAF) officer Monica Witt was accused by the US Department of Justice of sharing US government secrets, including the names of agents and specifics of operations, with Tehran in 2012. She remains at large and is believed to be in Iran.

Monica Witt, a former US Air Force (USAF) intelligence specialist charged with spying for Iran, was allegedly radicalised in part during a stint at a US university, the New York Times reports.

The 39-year-old’s radicalisation “was rooted” in Witt’s military service and “[…] accelerated while she was in graduate school” at George Washington University (GWU), where she earned a master’s degree in the Middle East Studies programme."

The New York Times quoted Witt’s classmate Cory Ellis as saying that “everyone just kind of sat and watched” as Witt expressed strong feelings against US foreign policy in class.

Ellis recalled that Witt was quiet during lectures, but “sometimes hung around afterward, talking about her time in the military”.

“She would talk about how she couldn’t sleep at night, the stuff she saw and was a part of, including drone strikes, extrajudicial killings and atrocities against children, all of which she claimed her colleagues in the military would brag about. She seemed distressed by what she called ‘gross incompetence’ by her superiors during her time abroad," Ellis added.

© AP Photo / B.K. Bangash
Muslim Security Officers Radicalization Becomes European Authorities' Great Fear
According to other classmates, Witt began to wear a hijab, “announcing her conversion to Islam and talking excitedly about Iran like a tourist”, in what “struck the classmates as extreme”.

In an unsealed indictment last week, the US State Department charged Witt with sharing government secrets with Iranian officials in 2012.

The State Department said in a statement that Witt defected to Iran in 2013 and is alleged to have assisted Iranian intelligence services in targeting her former fellow agents in the U.S. Intelligence Community (USIC).

“Witt is also alleged to have disclosed the code name and classified mission of a U.S. Department of Defence Special Access Program. An arrest warrant has been issued for Witt, who remains at large," the statement added.

In a separate development, the Daily Caller cited US Department of Education disclosures as claiming that Muslim-majority countries have contributed about $100 million to George Washington University in the form of gifts and contracts since 2011, including $80 million from Saudi Arabia alone and 14 million dollars from Kuwait.