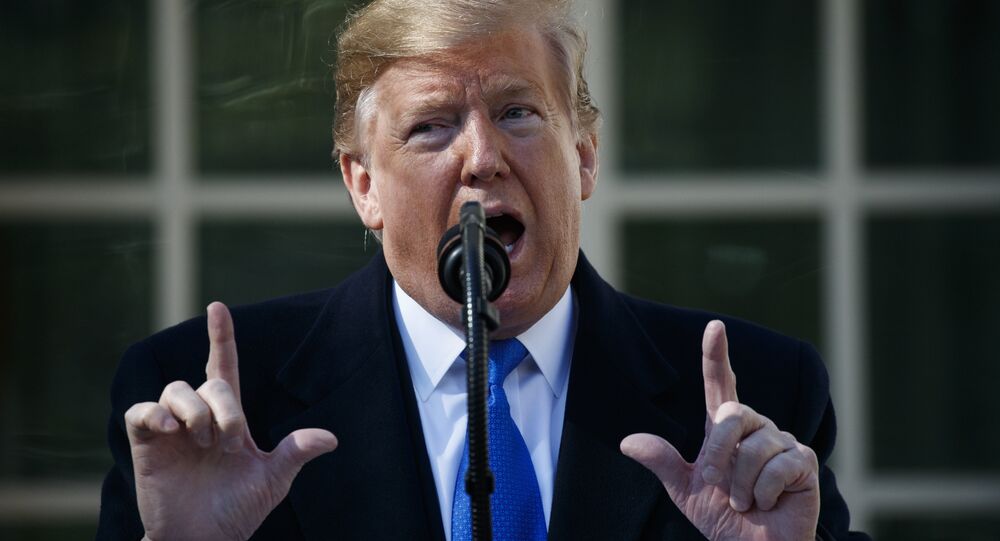 In a pair of tweets on Monday, US President Donald Trump lashed out at two senior Justice Department officials for allegedly plotting to secretly record him in the Oval Office and gather support for ousting him from power.

"Wow, so many lies by now disgraced acting FBI Director Andrew McCabe. He was fired for lying, and now his story gets even more deranged. He and [Deputy Attorney General] Rod Rosenstein, who was hired by [former Attorney General] Jeff Sessions (another beauty), look like they were planning a very illegal act, and got caught," Trump tweeted.

….There is a lot of explaining to do to the millions of people who had just elected a president who they really like and who has done a great job for them with the Military, Vets, Economy and so much more. This was the illegal and treasonous “insurance policy” in full action!

He went on by blaming the Justice Department officials for what he described as "illegal and treasonous policy".

Trump's tweets came after former Deputy FBI Director Andrew McCabe claimed during an interview with CBS' '60 minutes' on Sunday that Deputy Attorney General Rod Rosenstein was "absolutely serious" about secretly wearing a wire around Trump in order to gather support to remove the US president from power.

McCabe cited Rosenstein as allegedly saying that he never gets searched when he goes into the White House and that he "could easily wear a recording device" because "they wouldn't know it was there".

McCabe admitted that he "never actually considered taking him up on the offer" but that he told the FBI's top attorney about the idea.

"I think the general counsel had a heart attack. And when he got up off the floor, he said, 'I, I, that's a bridge too far. We're not there yet'", McCabe added.

In March 2018, US President Donald Trump called the firing of former FBI deputy director Andrew McCabe earlier that month a "great day for democracy" as he slammed the agency for being corrupt.

© AP Photo / Robert F. Bukaty
Jeff Sessions Suggested FBI Hire ‘Irish Drunks’ – Bureau Ex-Deputy Chief McCabe
"Sanctimonious [former FBI director] James Comey was his boss and made McCabe look like a choirboy. He knew all about the lies and corruption going on at the highest levels of the FBI!" Trump tweeted.

Earlier, local media reported that Attorney General Jeff Sessions was fired just days before he was set to retire and two days before his 50th birthday.

On 7 November 2018, Sessions resigned at the request of President Donald Trump who had repeatedly blasted the attorney general for recusing himself from the investigation into alleged collusion between the Trump campaign and Russia.