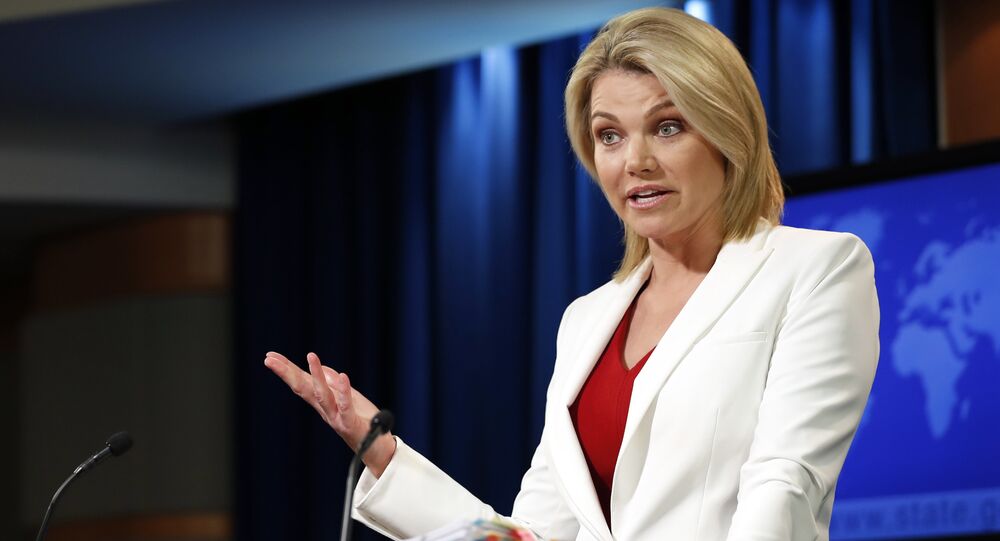 WASHINGTON (Sputnik) - The US State Department said in a statement on Saturday that spokeswoman Heather Nauert had withdrawn her nomination for the post of US Ambassador to the United Nations.

"The past two months have been gruelling for my family and therefore it is in the best interest of my family that I withdraw my name from consideration", Nauert said in a statement issued by the State Department on Saturday.

Heather Nauert withdraws herself from consideration for UN Ambassador: pic.twitter.com/Sab9ppQJgt

Current US ambassador to the UN, Nikki Haley, previously announced her intention to resign. The Trump administration nominated Nauert to succeed Haley. Trump subsequently announced that he planned to nominate Nauert to replace Haley.

© AP Photo / Alex Brandon
New US Envoy to the UN Nauert is Not Qualified For Really Anything – Ex-Diplomat
While announcing his decision in December 2018, Trump praised Nauert for her work with Secretary of State Mike Pompeo. He characterized the spokeswoman as "very talented, very smart, and very quick" and a person who would be respected by all.

Prior to being appointed to her position at the State Department, Nauert worked as a correspondent for ABC News and a news presenter for Fox News.

Senator Mazie Hirono (D-HI), however, noted that Nauert lacked the diplomatic experience and qualification to take up the job of US ambassador to the United Nations.

Similarly, ranking member of the House Foreign Affairs Committee, Eliot Engel, expressed concern that Nauert did not have the skill set required to do the job.