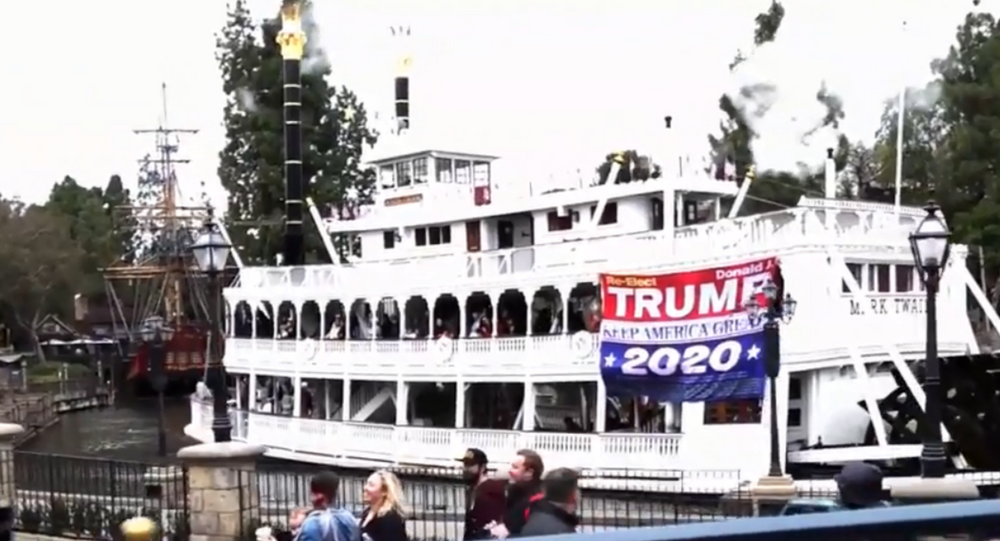 Dion Cini, a longtime supporter of US President Donald Trump, was banned from the Disneyland Park in Anaheim, California, this week after he opted to display a "Trump 2020" banner at an attraction site.

Wanting to spread the word of his support for Trump, Cini executed what he calls "Operation Flag Drop," which involved displaying his banner on the side of the Mark Twain Riverboat attraction. The sign read: "Re-elect Donald J Trump. Keep America Great!"

Video footage shared on social media shows Cini and a friend holding the banner up as some parkgoers yell out in support and others in disgust. Some can be heard saying "all lives matter," "immigrant lives matter" and, of course, "f**k Trump."

​Jennifer Elliott, a visitor who spotted the banner as she was making her way to the park's Critter Country area, told the Orange County Register that she immediately disapproved of the message.

"This is the happiest place on Earth; that kind of political agenda doesn't belong in the park," she told the outlet. "We hear about politics every day. I come to Disney to escape it. I was appalled and kind of dumbstruck."

Cini and his friend were apprehended by park security officials and local police officers after their Wednesday stunt. Although Anaheim police did not take either individual into custody at the time, Cini later posted on Facebook that he'd been banned from the park.

In a statement, Disney explained that Cini was removed from the grounds because the use of large banners is not allowed due to safety risks.

"We welcome all guests to enjoy our parks; however, demonstrations and the display of signs and banners are not permitted," Liz Jaeger, spokesperson for the park, told the Register. "This person has been previously warned, and we have taken appropriate steps to address his behavior."

This wasn't the first time that Cini had bumped heads with Disney officials. The New Yorker, who is a former US Marine, was previously banned twice from Florida's Walt Disney World last year in September and November, when he showed off pro-Trump signage at the popular vacation spot.

Local media reports indicate that Cini was reportedly taken off Disney World's blacklist after the September incident, but was added once more after the November stunt at Splash Mountain.

Cini is also known for kayaking around the Big Apple with his Trump banner and displaying another at a Broadway play.

Maduro Slams Trump-Duque Meeting as 'Feast of Hatred Toward Venezuela'

Presidents Trump and Duque Get Closer to Military Intervention in Venezuela