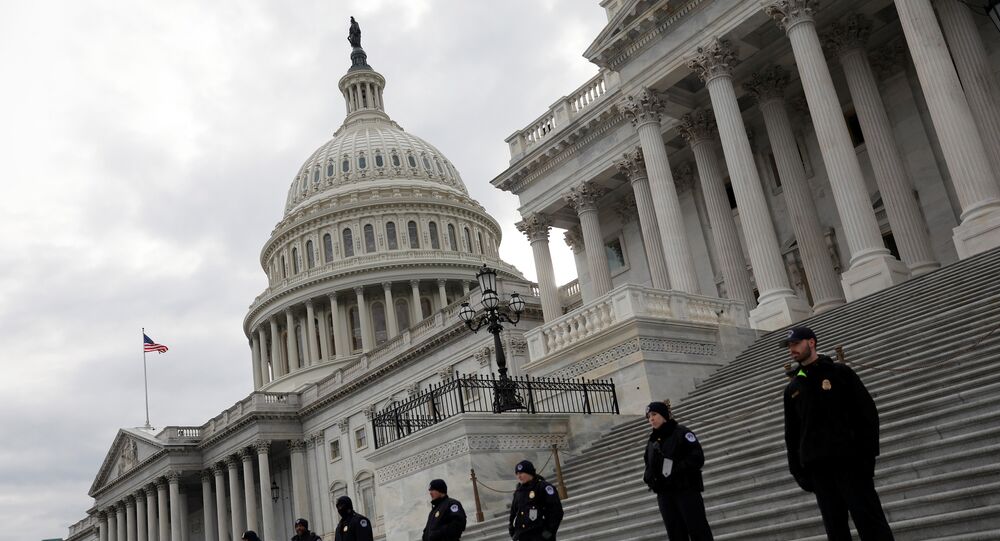 Legislation has been introduced to bring new US sanctions down on Russia. The new restrictions would target banks, Russia's LNG projects overseas, the country's cyber sector and sovereign debt, Senator Bob Menendez's office said in a statement on Wednesday.

"The comprehensive legislation seeks to increase economic, political, and diplomatic pressure on the Russian Federation in response to Russia’s interference in democratic processes abroad, malign influence in Syria, and aggression against Ukraine, including in the Kerch Strait", the statement said.

The bill would have to pass the US Congress and be signed by US President Donald Trump before becoming law, Reuters reported earlier on Wednesday.

Republican Senator Lindsey Graham said earlier in an email to Reuters that the goal of the new restrictions "is to change the status quo and impose meaningful sanctions and measures" against Russia.

According to the Graham's Wednesday statement, "the sanctions and other measures contained in this bill are the most hard-hitting ever imposed".

© Photo : Yörük Işık ‏/twitter
British Spy Vessel Reportedly Enters Black Sea Amid Kerch Strait Crisis (PHOTOS)
Among other measures, the new bill introduces sanctions on Russia's shipbuilding sector in the event that Russia "violates the freedom of navigation in the Kerch Strait or anywhere else in the world". The legislation also imposes restrictions on "24 FSB agents deemed complicit in the Kerch Strait attack, in response to the 24 Ukrainian sailors currently detained by Russia".

On 25 November, Ukraine's Berdyansk and Nikopol gunboats and the Yany Kapu tugboat illegally crossed the Russian maritime border as they sailed toward the Kerch Strait, the entrance to the Sea of Azov. Russia seized the Ukrainian vessels and detained 24 people on board after they failed to respond to a demand to stop. After the incident, a criminal case on illegal border crossing was opened in Russia.

Moscow has repeatedly slammed Kiev's attempts to portray the detained sailors as prisoners of war, stressing that they faced criminal charges. Russian President Vladimir Putin said that the incident was a provocation prepared in advance as a pretext to declare martial law, which was announced after the incident and lasted for a month. Putin said the provocation could be linked to Ukrainian leader Petro Poroshenko's low approval ratings ahead of the presidential election, set to be held in March.

© Sputnik / Tybyldy Kadyrbekov
Expansion of US Sanctions Unlikely to Impact Russia's Sovereign Rating - Moody's
The new US bill also envisages the "creation of a National Fusion Center to Respond to Hybrid Threats. The aim of this center is to better prepare and respond to Russian disinformation and other emerging threats emanating from the Russian Federation". In addition, the legislation introduces the "establishment of an Office of Cyberspace and the Digital Economy within the Department of State". According to the statement, this office "will lead diplomatic efforts relating to international cybersecurity, Internet access, internet freedom, the digital economy, cybercrime, deterrence and responses to cyber threats".

Meanwhile, The Financial Times has reported that the new sanctions against Russia were being also planned in the EU. In particular, the new restrictive measures are expected to be discussed at a meeting of EU foreign ministers next Monday and could be imposed within the next two months, the report said, citing unidentified diplomats who had been briefed on the discussions.

Washington and Brussels imposed the first sanctions against Russia in 2014 following the eruption of political crisis in Ukraine, justifying the move as dissatisfaction with Moscow's actions in Ukraine.

US Sanctions 9 Iranians, 2 Entities for Engaging in 'Covert Malicious' Actions

Anti-Russia Sanctions Imposed Due to Strong US Pressure - Lavrov