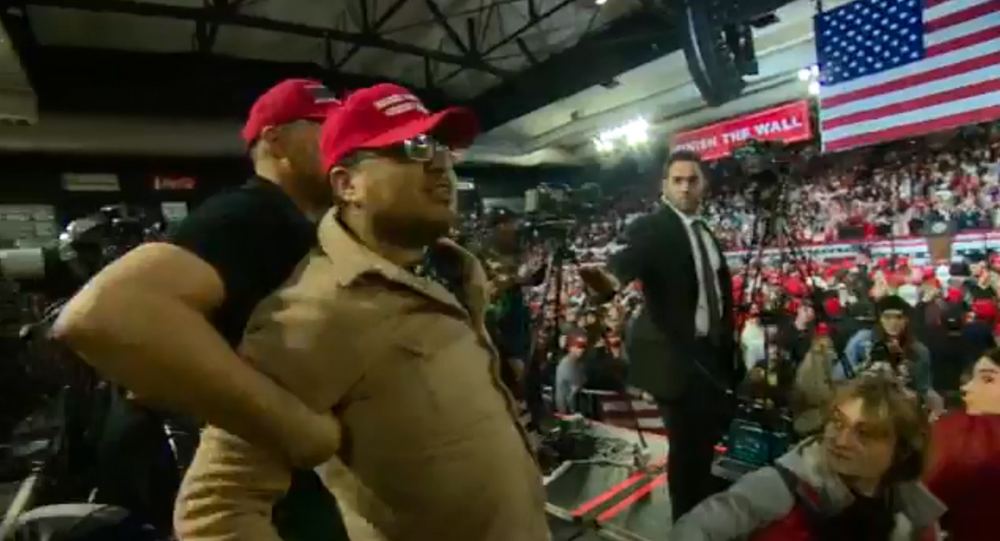 Ron Skeans, a BBC cameraman, was attacked Monday night by a man wearing a red "Make America Great Again" hat at a campaign rally that was being held by US President Donald Trump in El Paso, Texas

At the time of the incident, Skeans was filming Trump as he spoke on US jobs and media. Video footage captured by Skeans shows the camera frame focus on Trump before suddenly pointing down toward a crowd. It later refocuses and shows an individual sporting a MAGA hat being detained, before yelling out, "F**k the media."

Eventgoers can also be heard chanting "CNN Sucks" as the man is whisked away by other members inside the press pen.

​​Skeans told the BBC that the man had almost knocked him and his camera over twice before a blogger in the designated press area was able to intervene and remove the intruder. "I didn't know what was going on," he said, noting that the "very hard shove" came from his blindside.

The attack did not go unnoticed by Trump, who later inquired if Skeans was okay by giving a thumbs up in his direction. POTUS continued on with the speech after a shaken Skeans was able to respond with his own thumbs up.

Gary O'Donoghue, the BBC's Washington correspondent, told BBC Radio 4's "Today" program that "it was an incredibly violent attack" and that Skeans was doing fine, stressing that the cameraman is "made of stern stuff."

Eleanor Montague, a BBC producer, has also indicated that the individual attacked other news crews in the press area, but that Skeans was the one who got "the brunt of it."

In response to the attack, the BBC penned a letter to White House Press Secretary Sarah Huckabee Sanders, asking that security arrangements for the media during rallies be reviewed to prevent such incidents in the future.

Speaking on the altercation, British Foreign Secretary Jeremy Hunt told Sky News that "it is never acceptable when journalists and cameraman are attacked just for doing their job."

Nonprofit organization Reporters Without Borders joined in on the outrage, tweeting to its followers that it's "deeply concerned by this physical attack."

"As we continue to look into what happened, we firmly denounce all physical violence against reporters for doing their jobs," the press freedom group wrote. "This is unacceptable in the country of the First Amendment."

The White House Correspondents' Association has also condemned the attack.

"We are relieved that, this time, no one was seriously hurt," Olivier Knox, WHCA president, said in a statement. "The president of the United States should make absolutely clear to his supporters that violence against reporters is unacceptable."

Since his time on the campaign trail, Trump has had a combative relationship with the media, calling many outlets with which he disagrees "fake news" and referring to journalists as the "true Enemy of the People." Although Trump did check to see if the cameraman was okay, he did not condemn the incident at the time.

USA Today reported that many other interruptions took place at the El Paso rally, several of which were caused by protesters.