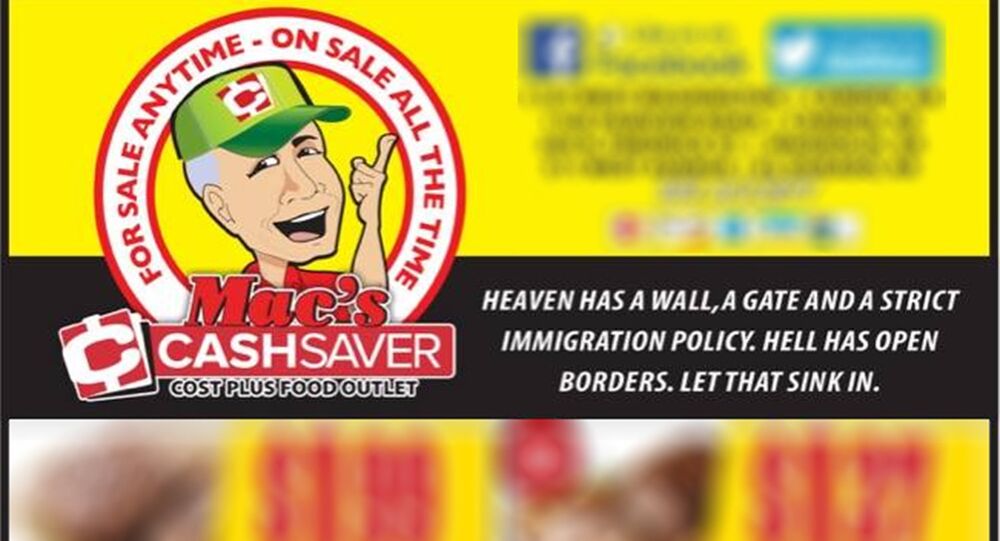 US Grocery Chain Rattles Twitter With 'Heaven Has a Wall' Ad

In an interview with NBC's KARK television station earlier this week, the company pledged to stand by the ad and continue to put out similar messages each week.

The Mac’s Cashsaver grocery chain has distributed a weekly ad to its stores in Arkansas and Louisiana that included the message: "Heaven has a wall, a gate and a strict immigration policy. Hell has open borders. Let that sink in."

The message was published on the front page of the ad which featured promotions for food products and was, in particular, sent out in the Arkansas cities of Camden, Magnolia and El Dorado.

The company, which describes itself as family owned and Christian, told NBC's television station KARK that it will stand by the ad and continue to put out similar messages each week.

Social network users remained at loggerheads over the ad, with some calling it a "bad move" and expressing hope that the company owners "go out of business".

"Check out our weekly ad for great xenophobia!" one Facebook user noted when commenting on the ad published on The Mac’s Cashsaver's Facebook page.

Arkansas and Louisiana!!! Talk about targeted advertising. Stupid meets dumb!!! Well please book your one-way ticket to this fairytale heaven of yours and I’m sure your fearless leader @realDonaldTrump will be waiting for you at the gate with a box of fried chicken 🤡🤡🤡🇺🇸🇺🇸🇺🇸

And I stand by my decision of not buying their products. Simple.

How does grocery store know that? Did they die and go to heaven and come back to earth somehow?

Ugh, I hate when people make idiotic analogies and then say "let that sink in," like they just explained the theory of relativity to you.

Others hinted at US President Donald Trump's drive to build a wall near the country's Mexican border to contain migrants, urging "Arkansas and Louisiana build their own wall".

Let Arkansas and Louisiana build their own wall.

At the same time, some netizens did not think twice before describing the ad as "awesome" and insisting that "there's nothing wrong with what that statement says".

Brilliant ad. Very well done. Perfect for the lame media and their acolytes — all of whom are trapped in Dante’s 8th circle of the Inferno (hell) with the other “sowers of discord”.

This ad is brilliant.

US Congress' refusal to fund the construction of a border wall along the Mexican border resulted in a partial government shutdown. Trump has repeatedly threatened to declare a national emergency to address what he calls a crisis over crime caused by immigrant gangs, drug smuggling and human trafficking, as Dems remain opposed to the move.