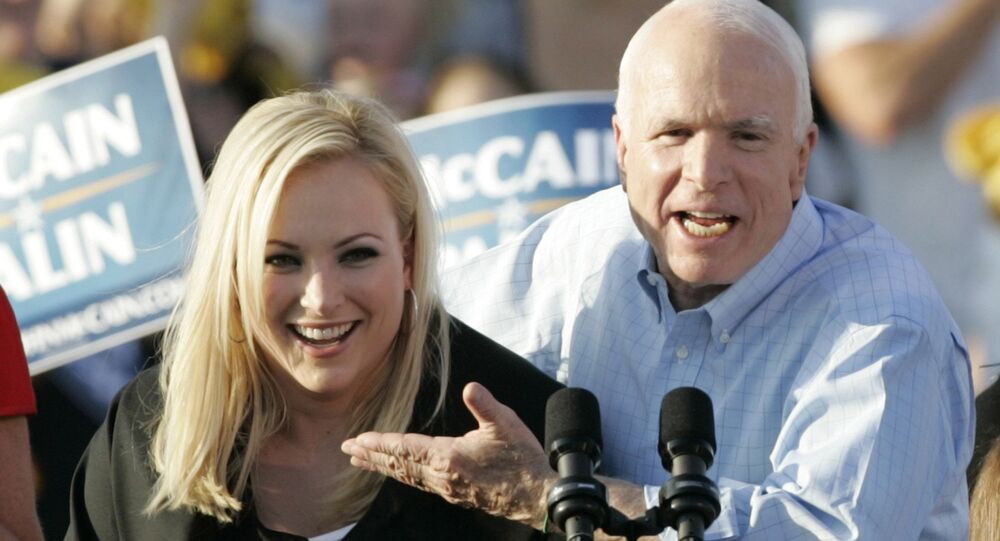 Although John McCain, known to have had a heated exchange of jabs with the US President, died last year, the feud between his family and the Trumps seems to be far from over. Just days after Donald Trump mocked the late senator’s final memoirs, McCain’s daughter Meghan took her vendetta onto a late night show.

John McCain’s daughter Meghan, who is “The View” co-host, has slammed Donald Trump’s daughter Ivanka and her husband Jared Kushner for attending her father’s funeral after the comments the US president made about the late Senator. She confessed that she did not expect any of the Trumps to attend the funeral but hoped that she made the White House power couple feel uncomfortable with her eulogy, in which she blasted “cheap rhetoric” hinting to Donald Trump.

“A funeral is obviously a sacred time and I thought that my family had made it clear, or at least I had, that the Trumps are unwelcome around me, and that my father had been clear about the line between the McCains and the Trumps. So, I was surprised when they were there, and it made me uncomfortable”, she told the host of The Late Show with Stephen Colbert.

To illustrate her never-ending rift with Donald Trump and his family she resorted to a cheeky pop-culture reference, promising she was not going to bury a war hatchet.

“I really want it made very clear that, the Trumps had beef with me then and in the words of Cardi B, they’re going to have beef with me forever, and I’m not going to forget”, she vowed.

Happy Friday, thanks for the sage words to live by @iamcardib https://t.co/040CG4g9wb

​The family feud remarks received a mixed response on Twitter as some did not seem to appreciate the reference.

Did you really say “In the words of Cardi B?” I’m without speech

So, you get your words to live by from Cardib and Whoopi is like family to you……..Explains a lot!

I had so much respect for you and now you turned into something I can’t even stand to look at. So sad the person you turned out to be

​Some tried to guess what was behind her never-ending feud with the Trumps.

You Trump hate is simple, yes your father was a Great War hero, but he was an awful politician, and Trump pointed it out and you’re angry….

Dont hold onto the anger it will eat u alive. Anger is part of grieving.

Holding grudges only punishes you pic.twitter.com/NXYvervgkA

Happy Friday, thanks for the sage words to live by @iamcardib https://t.co/040CG4g9wb

​However, her funeral rant also seemed to recruit new fans for Meghan McCain.

Happy Friday! Enjoy you on the view! I have watched the show for years now and love your POV and hell raiser attitude. You do a great job, and while I hold different political views, I follow you because you love America and Americans and for that I love you right back!

​It is the second time in a few days as Meghan McCain has taken aim at Trump. Recently, she branded what she called Donald Trump’s “obsession” with her father “pathetic”, commenting on reports that the US president doubted the literary successes of her father. Trump allegedly said that McCain “wrote a book and the book bombed”. In two tweets, she hinted that the US president might be haunted by her father’s “greatness”.

READ MORE: John McCain's Funeral — A Time for Remembrance or a Time to Attack?

Trump’s spiteful words targeting McCain have evoked criticism long before the presidential candidate and the prominent Republican passed away last year following a battle with brain cancer. Among other things, Trump refused to recognise John McCain as a "war hero" in an interview in 2016, motivating it by the fact that the senator had been captured during the Vietnam War. McCain, for his part, opposed some of Trump's bills, including a crucial one designed at repealing former President Barack Obama’s health care programme.