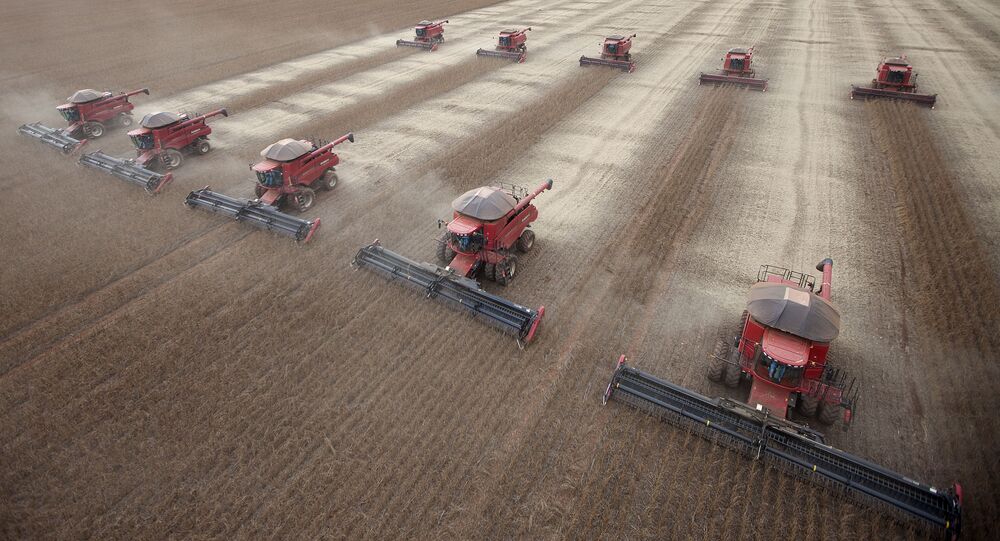 Twice as many farmers in Illinois, Indiana and Wisconsin filed for bankruptcy in 2018 as did during the 2008 recession, statistics from the 7th Circuit Court of Appeals show.

Sinking commodity prices, China's retaliatory tariffs and increasing agricultural competition from Russian and Brazilian producers are some reasons why farmers in the Midwestern region of the United States are declaring bankruptcy, The Wall Street Journal reported Wednesday.

Prices have been pushed lower "due to lost markets because of the administration's trade wars," a spokesman for the National Farmers Union (NFU) told Sputnik News, adding that "prices will likely continue to be depressed for years to come because we have lost our reputation as a reliable trading partner."

NFU is the second largest farm organization in the US after the American Farm Bureau, representing 33 state chapters and more than 200,000 family farms in the nation's capital.

© CC BY 2.0 / United Soybean Board
US Soybean Farmers Struggle to Break Even as US-China Trade Row Deepens

"What we are seeing now is a majority of US farmers are earning negative income, meaning they are losing money from farming every year. So as they burn through equity, they are finding it harder to pay for and obtain the financing required to continue operating. This has pushed many farmers, particularly beginning farmers, into significant financial stress, and we're now seeing a wave of bankruptcies in the Midwest," the NFU spokesman said in emailed comments to Sputnik News.

Farmer bankruptcies in Arkansas, Iowa, Minnesota, Nebraska, North Dakota and South Dakota shot up 96 percent in 2018, according to data from the 8th Circuit Court of Appeals. And in Kansas, Colorado and Oklahoma, bankruptcies surged 59 percent last year. Farmers from these states accounted for nearly 50 percent of all US farming income in 2018, Axios reports.

Soybeans are often rotated with corn crops in Nebraska, Iowa and Illinois. Kirk Duensing, a corn and soybean farmer in Nebraska, told the WSJ, "I've been through several dips in 40 years… This one here is gonna kick my butt."

Soybean prices have declined nearly 19 percent since January 20, 2017, the day US President Donald Trump took office, according to prices quoted in US dollars on TradingView.

Higher interest rates pursued by the Federal Reserve also make it more expensive for farmers to borrow ahead of the 2019 planting season, which is right around the corner. Washington and Beijing are still showing few signs of reconciling all their differences in the trade war in the near term.

"Right now we are paying the price for retaliatory tariffs imposed on imported goods produced by some of our best trading partners," Illinois Farm Bureau (IFB) President Richard Guebert Jr. said in a statement Wednesday responding to Trump's State of the Union Address.

The IFB president added that income from selling soybeans, pork and other agricultural products accounts for 30 percent of income for members of the IFB. The group represents about 75 percent of Illinois farmers.

"IFB encourages President Trump to secure a fair trade deal with China, and we back his demand for quick congressional approval of the US-Mexico-Canada Free Trade Agreement," said Guebert.