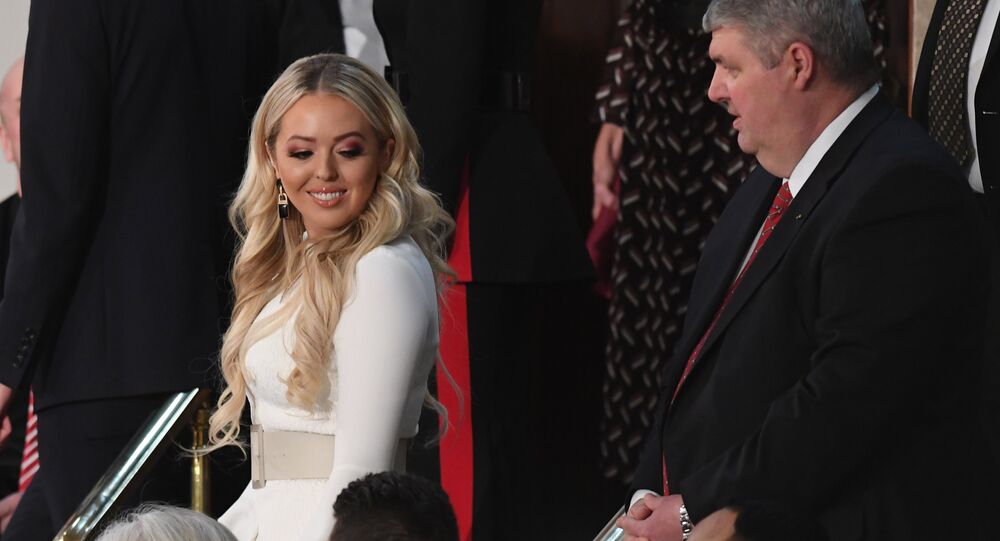 Democratic congresswomen stood in unity with their statement-making fashion choice at President Donald Trump's 2019 State of the Union address in Washington, DC, on 6 February.

Tiffany Trump, daughter of the US president, donned an all-white outfit at the State of the Union – the same colour numerous female Democratic lawmakers chose to make a reference to the suffragette movement.

Tiffany, who prefers to stay under the radar unlike her half sister Ivanka, appeared to be the only female member of the Trump family to wear white.

Social media users speculated whether Tiffany's ensemble had a political significance, and was an intentional statement, or was chosen by a twist of fate.

I wonder if Tiffany trump wore white in solidarity with the house dems? #SOTU pic.twitter.com/lEcbSFnOuq

Tiffany Trump, the black sheep of the family, is wearing all white. #SOTU

Do you think Tiffany Trump planned to stand with #StateOfTheWoman in her white dress? Or…oops!

Can we clap for our black sheep sister Tiffany Trump.

Only Trump with a brain. pic.twitter.com/9vh6VnU09V

Anyone else notice Tiffany Trump sitting away from her family & wearing white? Conspiracy or coincidence? #SOTU #StateOfTheUnion #SOTU19 pic.twitter.com/jV2nngX0yd

Tiffany Trump wearing all white was i’m sure unintentional but is fucking hilarious. #sotu

Tiffany Trump is wearing white AND sitting away from her family 👀

The chair of the House Democratic Women’s Working Group encouraged members to wear "suffragette white" to President Trump's second State of the Union address to honour the legacy of women's suffrage and "send a message of solidarity that we’re not going back on our hard-earned rights".

I'm looking forward to wearing suffragette white to #SOTU next week with all @HouseDemWomen! We'll honor all those who came before us & send a message of solidarity that we're not going back on our hard-earned rights!https://t.co/CVPLLIunde

The decision to wear white was made as lawmakers sought to make a statement about record-breaking female representation in Congress: there are currently 102 women serving in the House of Representatives (89 Democrats, 13 Republicans).

The House Democratic majority is led by Speaker Nancy Pelosi, the first and only woman ever to hold the position. Some 25 women are currently serving in the Senate as well.

Today, we wear suffragette white for the #SOTU and stand in unity to continue to fight for women’s rights across America. #WomenUnited #StateOfTheWoman pic.twitter.com/pAATs3bZWS

Today, we wear suffragette white to send a strong message that we are fighting #ForThePeople and advancing women’s rights. #WomenUnited pic.twitter.com/949MrTWf99