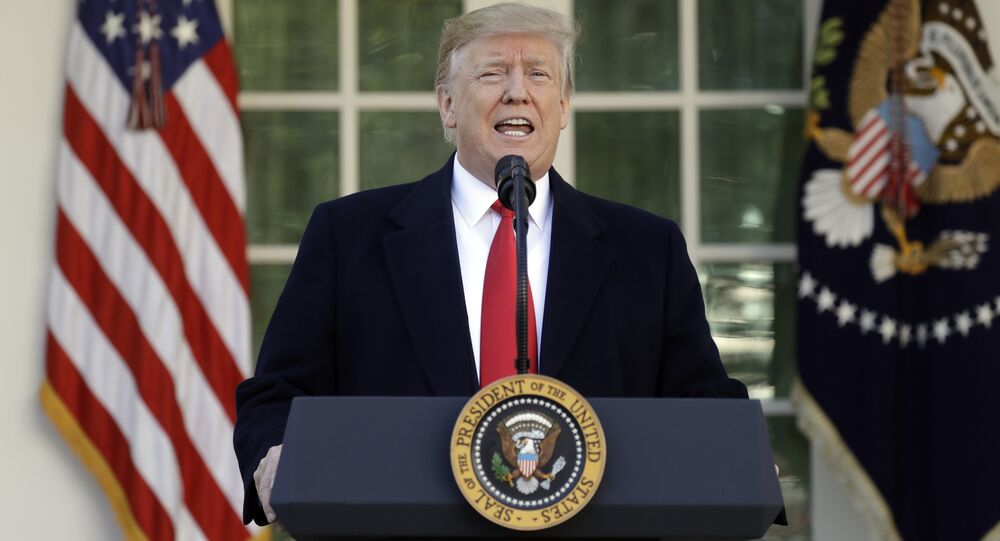 US President Donald Trump delivered his speech facing a joint session of Congress - a body now divided along partisan lines as a result of November’s midterm elections during which the Democratic Party seized control of the House of Representatives. Here are the highlights of his second State of the Union address.

"We meet tonight at a moment of unlimited potential. As we begin a new Congress, I stand here ready to work with you to achieve historic breakthroughs for all Americans," Trump said before a joint session of Congress on Tuesday.

The president was initially scheduled to deliver the State of the Union on January 29. However, less than two weeks beforehand Democratic Speaker of the House Nancy Pelosi postponed the proceedings citing security concerns due to the fact the US government was in the middle of a partial shutdown. The 35-day shutdown, the longest in US history, began on December 22 after Democratic lawmakers refused to approve $5.7 billion in spending Trump wanted to build a barrier on the US southern border.

During November's midterm elections the Democratic Party seized control of the House of Representatives thereby dividing Congress in two along partisan lives. The new US Congress convened in January and many new Democratic lawmakers have called to impeach Trump.

"In the past, most of the people in this room voted for a wall — but the proper wall never got built. I’ll get it built," Trump told Congress on Tuesday.

He explained the border wall with Mexico to curb illegal immigration will be "a smart, strategic, see-through steel barrier — not just a simple concrete wall."

"It will be deployed in the areas identified by border agents as having the greatest need," he added.

President Trump also called on Congress to pass the US Reciprocal Trade Act to combat unfair tariffs on US products.

"Tonight, I am also asking you to pass the United States Reciprocal Trade Act, so that if another country places an unfair tariff on an American product, we can charge them the exact same tariff on the same product that they sell to us," Trump said on Tuesday.

Any new agreement to replace the Intermediate-range Nuclear Forces (INF) treaty perhaps could include China and other countries, Trump said.

"Decades ago the United States entered into a treaty with Russia in which we agreed to limit and reduce our missile capabilities," Trump said. "While we followed the agreement to the letter, Russia repeatedly violated its terms. That is why I announced that the United States is officially withdrawing from the Intermediate-Range Nuclear Forces Treaty, or INF Treaty. Perhaps we can negotiate a different agreement, adding China and others."

Trump said the United States will outspend and out-innovate all other countries if a new treaty is not reached to replace the INF Treaty.

"As part of our military build-up, the United States is developing a state-of-the-art Missile Defense System," Trump said before a joint session of Congress on Tuesday.

President Trump confirmed that he will meet with North Korean Leader Kim Jong-un for a two-day summit in Vietnam on February 27 and 28.

"Chairman Kim and I will meet again on February 27 and 28 in Vietnam," Trump said before a joint session of Congress on Tuesday.

On January 18, the White House announced that Trump planned to meet with the North Korean leader in late February. The first meeting of the two leaders took place in June 2018, when the parties reaffirmed their commitment to the denuclearization of the Korean Peninsula.

On NATO: 'United States Was Being Treated Very Unfairly'

Donald Trump said that his administration has secured a $100 billion increase in defence spending from NATO allies.

"For years, the United States was being treated very unfairly by NATO — but now we have secured a $100 billion increase in defence spending from NATO allies," Trump said before a joint session of Congress on Tuesday.

Trade Row with China: 'We Are Now Working on a New Trade Deal'

A new trade deal between the United States and China must include a structural change to end unfair trade practices, Trump said.

"I have great respect for President Xi, and we are now working on a new trade deal with China," Trump told Congress. "But it must include real, structural change to end unfair trade practices, reduce our chronic trade deficit, and protect American jobs."

'The Hour Has Come': US to Be Able to Reduce Troop Presence in Afghanistan

President Trump said that the United States is engaged in constructive talks with a number of Afghan groups, including the Taliban.

"In Afghanistan, my Administration is holding constructive talks with a number of Afghan groups, including the Taliban," Trump said.

He added that the United States will be able to reduce its troop presence in Afghanistan and focus on counter-terrorism after constructive talks with various Afghan groups.

"As we make progress in these negotiations, we will be able to reduce our troop presence and focus on counter-terrorism," Trump said before a joint session of Congress. "We do not know whether we will achieve an agreement — but we do know that after two decades of war, the hour has come to at least try for peace."

$500 Million for Battle with Child Cancer

Donald Trump said his budget will request $500 million to fund child cancer research over the next ten years.

"Many childhood cancers have not seen new therapies in decades," Trump said on Tuesday. "My budget will ask the Congress for $500 million over the next 10 years to fund this critical life-saving research."

© AP Photo / Evan Vucci
Trump-Kim Summits Pave Way for ‘Establishing New Relations Between the US, North Korea'
The US president said his administration and budget is commitment to eliminating the HIV epidemic in the United States within 10 years. Trump also called on Congress to pass legislation that delivers fairness and price transparency on drugs for US patients.

It is time to return US troops deployed in Syria back home, President Trump said.

"Now, as we work with our allies to destroy the remnants of ISIS*, it is time to give our brave warriors in Syria a warm welcome home," Trump told Congress on Tuesday.

In December, Trump announced the US troop pullout from the Syria, but gave no timeline.