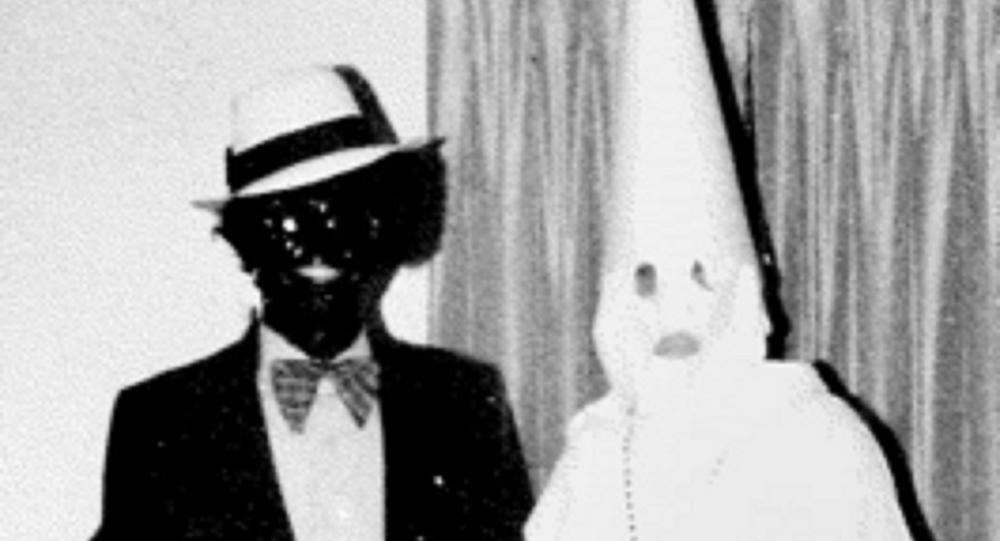 Earlier, photos from Democratic Virginia Governor Ralph Northam's 1984 medical school yearbook page showing a person in blackface and another in a KKK robe prompted him to apologize amid calls for his resignation.

Governor Northam has questioned whether one of the two individuals wearing racist costumes in an old yearbook photo was really him.

Speaking to the Washington Post, Democratic Virginia state senator Louise Lucas said that Northam had called her on Saturday morning to say that he now didn't believe the picture had him in it, with Lucas reportedly responding that "he should have said that yesterday, then."

© AP Photo / Steve Helber
Virginia Governor Northam Wore Racist Costume in Yearbook (PHOTO)
A day earlier, Northam acknowledged that he was in the photo, admitted that the image was "clearly racist and offensive," and offered an apology to his constituents. "This behaviour is not in keeping with who I am today and the values I have fought for throughout my career in the military, in medicine, and in public service," he said.

A Virginia Democrat Source told NBC News that Northam had planned to resign after issuing his apology and meeting with the Virginia Legislative Black Caucus, but that he later had a change of heart.

The New York Times reported Saturday that Northam was calling former classmates to try to find out more information on the photo, with CNN citing a source who said that Northam believed the yearbook pictures may have been mixed up.

Protesters gathered in Capitol Square in Richmond, Virginia on Saturday, calling on Northam to step down in favour of Lieutenant Governor Justin Fairfax. The Democrats' GOP rivals and political and media heavyweights across the board have made similar demands, saying Northam does not "uphold American values."

Ralph Northam has been a good Governor and champion for gun safety, but in light of this racist and deeply offensive yearbook photo he can no longer lead Virginia effectively. For the good of the state he should resign and step aside.

Ralph Northam's governorship is experiencing a post-election abortion, but after his fellow Dems set him aside, they will "make him comfortable" and "have a conversation" to decide how they will kill his political career.

VA Governor Ralph Northam’s past racist behavior caps a week where he displayed an egregious lack of respect for human dignity and the American values that we fight every day to uphold. Staying in office only poisons efforts to grow together as one nation. He should resign.

Anyone who thought Jim Crow was amusing in 1984 is unfit to exercise government power at any level in 2019. Ralph Northam must resign. Read this history of blackface and its relationship to slavery and the KKK: https://t.co/Cr0HYIV5je

The "Who's Who" Guide To Ralph Northam's Yearbook pic.twitter.com/AtW8UcJQEd

Northam was sworn in as governor in January 2018 for a four-year term following an election in November 2017 against Republican rival Ed Gillespie.