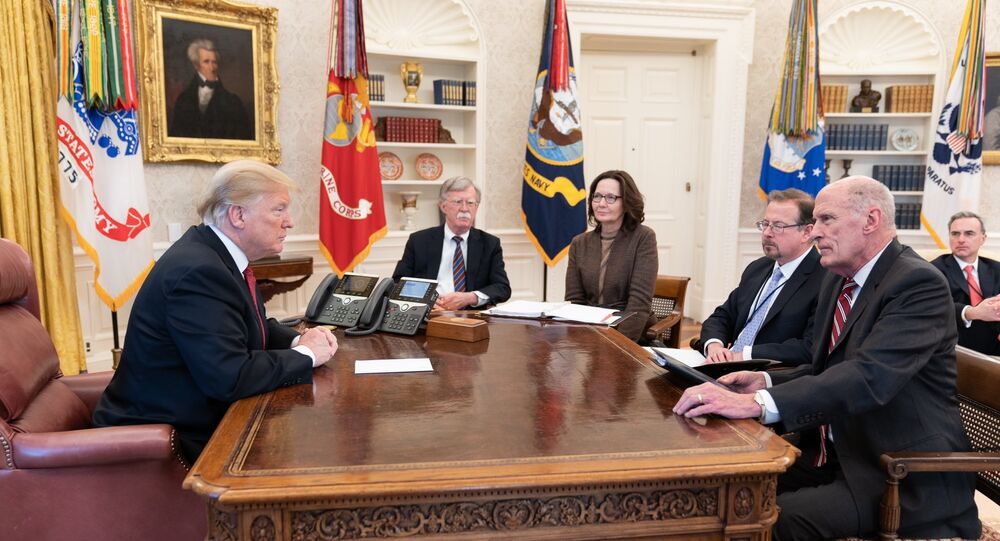 US presidents normally meet with their intelligence officials on a daily basis in order to discuss the most pressing national security issues.

The White House called off President Donald Trump's daily intelligence briefing on Wednesday a day after CIA Director Gina Haspel and Director of National Intelligence Dan Coats, as well as a handful of other top intelligence officials presented their assessment of national security threats in front of Congress that appeared to contradict the administration's recent claims, The Daily Beast reported.

© AP Photo / Mostafa Qotbi/IRNA
US Intel Chief Warns Israel: Iran Could Retaliate in Case of New Syria Strike
Speaking before the Senate intelligence committee on Tuesday, Haspel said that Iran was fulfilling its obligations under the nuclear deal, which Trump has repeatedly blasted as a "one-sided and terrible" agreement.

Coats, for his part, stated that Daesh* remained a threat — an observation that appears to contradict Trump's statements that the US had crushed the terrorist group in Syria.

The following day, the White House cancelled the daily briefing, while POTUS hit Twitter with a lengthy message, saying that "perhaps intelligence should go back to school".

When I became President, ISIS was out of control in Syria & running rampant. Since then tremendous progress made, especially over last 5 weeks. Caliphate will soon be destroyed, unthinkable two years ago. Negotiating are proceeding well in Afghanistan after 18 years of fighting..

When The Daily Beast reached the White House for comment, spokeswoman Sarah Huckabee Sanders simply told the media outlet that the briefing "was moved", without providing any further details.

Just a day after he lambasted the intelligence community, Trump's tone had changed: he made an abrupt u-turn, having tweeted that the testimony had been "distorted" by the media and claimed that "we are all on the same page".

Just concluded a great meeting with my Intel team in the Oval Office who told me that what they said on Tuesday at the Senate Hearing was mischaracterized by the media — and we are very much in agreement on Iran, ISIS, North Korea, etc. Their testimony was distorted press…. pic.twitter.com/Zl5aqBmpjF

….I would suggest you read the COMPLETE testimony from Tuesday. A false narrative is so bad for our Country. I value our intelligence community. Happily, we had a very good meeting, and we are all on the same page!

Shortly after reports on the contradiction between the US intelligence community and Trump surfaced, Iranian Foreign Minister Javad Zarif took to Twitter to ridicule "that awkward moment":

When @realDonaldTrump's own intelligence agencies contradict what he, the warmongers in his admin, and the Israelis say about Iran. He should have listened to the EU, the UN, and former US officials all along. pic.twitter.com/fszNJfCnen

President Trump unilaterally pulled out of the 2015 nuclear deal with Iran last May, saying that Tehran failed to comply with the agreement, and announced the reintroduction of sanctions against the country. The move was strongly condemned by other signatories to the deal — Russia, China, the UK, France, Germany, and Iran itself — which insisted on the need to preserve it.

© AP Photo
Intelligence Community 'Wrong' About Iran, 'Should Go Back to School' - Trump
Back in December 2018, Trump also suddenly announced that the US would be withdrawing its troops from Syria, having declared victory over Daesh. The decision prompted a wave of resignations in the White House, including Defence Secretary Jim Mattis, who apparently didn't share the commander-in-chief's assessment.

The views of the US intelligence community appeared to be incompatible with other claims by Trump, including that North Korea remains a threat. POTUS and his team have been working on improving relations with Pyongyang for almost a year now, with Trump holding a historic summit with Kim Jong-un in Singapore in June, where the North Korean leader pledged to denuke.