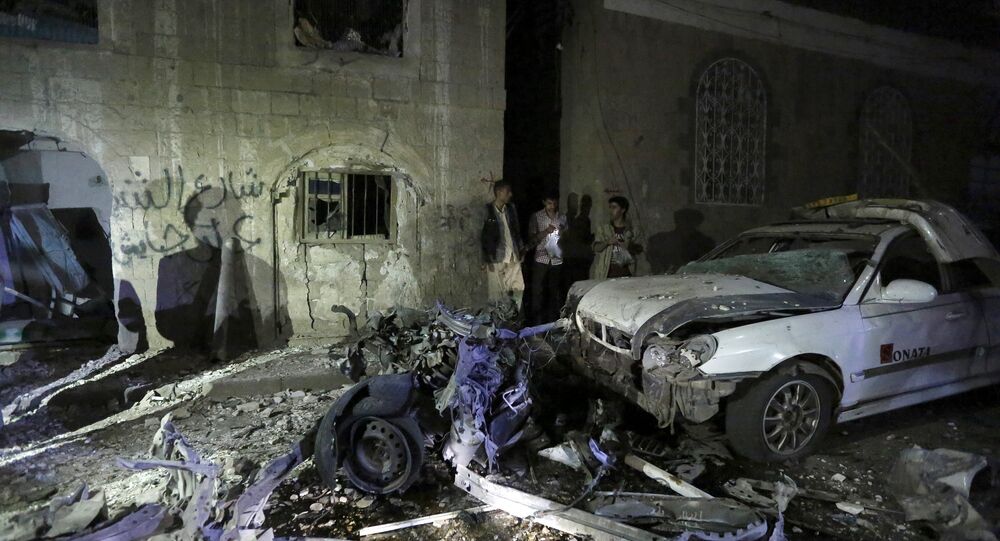 Last month, a bipartisan congressional attempt to end US support for the Saudi war in Yemen stalled in an intransigent Republican-controlled House of Representatives, despite having passed in the Senate. Now, with the newly elected Democrats taking over the chamber, the measure’s sponsors are looking to try again.

At a press conference Wednesday, Republican Senator Mike Lee, Democratic Senator Chris Murphy and Independent Senator Bernie Sanders, who caucuses with the Democrats, as well as Democratic Representatives Ro Khanna and Mark Pocan, announced they were reintroducing the resolution that aimed to force the White House to withdraw all US forces from the Yemeni theater within 30 days or seek congressional authorization for them to continue their deployment there.

The bill also contains a provision stipulating that US forces fighting al-Qaeda in Yemen are not subject to the removal order, which is designed to force the executive branch of the US government to respect the 1973 War Powers Act, which deprives the president of the ability to commit US forces to potential hostilities without legislative approval. US forces are authorized by Congress to engage in operations against al-Qaeda and its affiliates outside of declared war zones by the 2001 Authorization for Use of Military Force Against Terrorists, signed into law in the days after the September 11, 2001, terrorist attacks perpetrated by that organization.

At the press conference Wednesday, Lee noted that the ability of the king of England to unilaterally take the country to war, without parliamentary approval, was one reason for the US seeking independence from that political system in the late 18th century. "The American president does not have that power," he said.

Lee likened the scenario to a bank robbery, with the US playing the role of planner, adviser and getaway driver for the Saudi-led 10-country coalition, which includes the United Arab Emirates, Sudan and the Yemeni government itself, against the Zaidi Shiite Houthi movement, backed by Iran and Hezbollah, which ejected Yemeni President Abdrabbuh Mansur Hadi from power in March 2015.

"If we were to talk about someone, say, robbing a bank: if you had someone who drove the bank robber to the bank, identified which bank would be robbed, provided logistical assistance in identifying exactly where the cash was, which tellers would be on shift at the moment, how best they could get to the cash, and then drove the bank robber away, we would say that that person is involved in a bank robbery. We would say that that person not only aided in and abetted in, but committed a conspiracy to engage in a bank robbery."

While Lee admitted it was not a perfect analogy and he didn't "mean to suggest criminal activity here, because it's different than that," he nonetheless highlighted that providing mid-air refueling, target selection assistance, combat support and intelligence "does mean, in fact, that we are involved in a war." But such a war should be declared and authorized by Congress, not by the executive, he said.

"The American people deserve more and should demand better than this," Lee said.

Sanders said the purpose of the resolution, which US President Donald Trump is expected to veto but that two-thirds of both houses of Congress could override, was to "make sure that the United States Congress reasserts its constitutional responsibilities in terms of lawmaking."

When the Senate passed the resolution last month, it was the first time either house of Congress had voted to withdraw troops from a conflict under the War Powers Act, the New York Times noted.

"The resolution is the same as before… Now, because the House is controlled by the Democrats, they think that it'll get through this time," Medea Benjamin, co-founder of anti-war organization Codepink, told Sputnik Wednesday. "I think it has a very good shot at passing."

"Things in Saudi Arabia have gotten only worse since the last time in terms of all of the sentiment that people have around the [Jamal] Khashoggi murder. On the other hand, perhaps the excuse might be that there are ongoing talks in Yemen with the peace process, but certainly we will say that this is one of the reasons that the talks are going on — because there is pressure coming from the Congress, that is pressuring the White House, that is pressuring the Saudis," Benjamin, who is also author of the book "Kingdom of the Unjust: Behind the US-Saudi Connection," told Sputnik.

"[T]he more pressure that we can put on the White House, the more these negotiations will really be fruitful," Benjamin said. "So we're very excited that this is being reintroduced. There's a big coalition of groups ready to take this on, it's both Democrats, Republicans; among the grassroots groups it's groups from Codepink all the way to the Koch Brothers and Freedomworks and the Cato Institute, so there's a real left-right coalition for this. And the humanitarian groups are a very large constituency, actually — some of them are enormous organizations."

"[I]t's significant for a number of reasons: one, because we really think it can be influential in terms of winding down or finding a solution to the war in Yemen; and the other because it's the first time the War Powers Act has been used since it was introduced in 1973 around the [end of the] Vietnam War. Congress has been really ‘missing in action' and derelict in its duty to be the branch of government that declares or doesn't declare war," she said.

The activist said that Congress passing the resolution "starts us on a path of really obeying the law when it comes to US interventions overseas and putting Congress back in the driver's seat, and that's so important in everything today, from potential interventions in Venezuela or in Iran or anywhere else."

"The administration has just been blind in its recognition of how much opposition there is to the US support for the war in Yemen, and in its continued allegiance with this incredibly repressive Saudi regime, so I would think that the Trump administration would probably veto this," Benjamin said, noting that "passing this by the House and the Senate will be very influential in the White House, even if the president vetoes it."