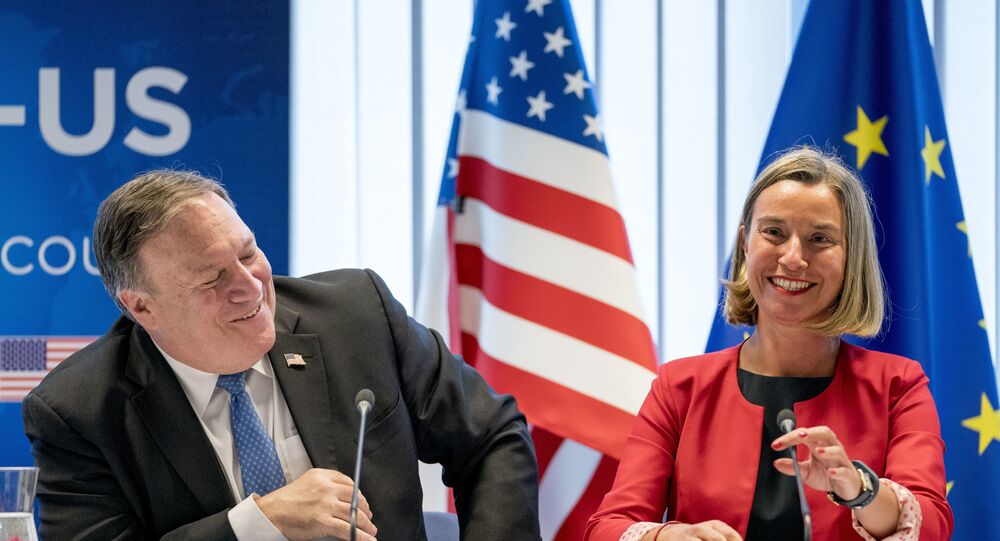 "They discussed the recent political developments in Venezuela and work towards a peaceful, democratic transition. They agreed to keep in touch in the coming weeks", the statement said.

Last week, Pompeo appointed Elliott Abrams, a close political ally of US National Security Advisor John Bolton as a special envoy for restoring democracy in Venezuela. Media reports have linked the appointment to a US encouragement of an upcoming coup to topple Venezuelan President Nicolas Maduro.

The move was immediately welcomed by the United States, which urged Maduro to step down and officially recognized Guaido as the country's leader.

© Sputnik / Stringer
'Hands off Venezuela, Immediately!' WATCH Maduro Address Trump in English
Maduro, in turn, has insisted that he is the country's constitutional president and accused the opposition leader of being a "US puppet". Maduro also accused Washington, which has long voiced concerns over the legitimacy of his re-election last year, of plotting a coup in Venezuela.

Some certain countries, mostly those in Latin America, have recognized Guaido as the acting Venezuelan president. In turn, Russia, Cuba, China, Turkey and Iran have reaffirmed its support for Maduro as the legitimately elected head of state.

Meanwhile, EU countries as France, Germany, the Netherlands, Spain and the United Kingdom have given Maduro an ultimatum, stating that they would recognize Guaido as interim president if snap presidential election were not announced in Venezuela within eight days.

© CC0 / Pixabay
Guaido Says Venezuela Needs European Assistance to Rebuild – Reports
Maduro, for his part, has rejected the ultimatum, saying that it ignored Venezuela's rights of a sovereign state.

On Monday, the Trump administration announced new measures to cut off Maduro’s financial resources and redirect them to Guaido, including freezing $7 billion worth of assets of the Venezuelan state-owned oil company PDVSA in the US jurisdictions.

US National Security Advisor John Bolton has warned that the United States will take action if its diplomatic staff or Guaido are threatened with violence.