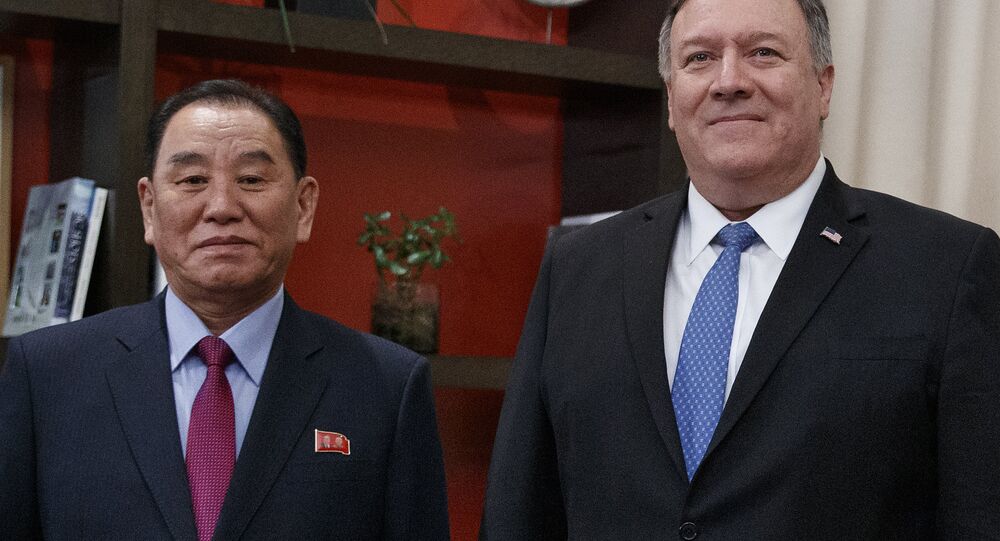 The US State Department said in a press release on Friday that US and North Korean officials held a productive working level meeting after talks between Secretary of State Mike Pompeo and Vice Chairman Kim Yong Chol.

The situation on the Korean Peninsula has improved since the beginning of last year. During this time, North Korean leader and South Korean President Moon Jae In have held several meetings, while Kim even had a summit with Trump in Singapore. This meeting yielded an agreement stipulating that Pyongyang would make efforts to promote the complete denuclearization of the peninsula in exchange for the United States and South Korea freezing their military drills, as well as the potential removal of US sanctions.

Acting US Defense Secretary Patrick Shanahan said Thursday during the rollout of the 2019 Missile Defense Review that the missile capabilities of North Korea "remain a significant concern".

© AP Photo / Lee Jin-man
North Korea to Expel US Citizen Detained for Illegally Entering State - Reports
Last year, The Washington Post reported, citing officials familiar with the matter, that US intelligence had seen signs of the construction of new missiles in North Korea. In particular, the report said that satellite photos and other evidence showed that work was underway on at least one or possibly two liquid-fueled ICBMs at a research facility in Sanumdong.

In December, the Yomiuri Shimbun newspaper reported that the North Korean military had tested telemetry equipment used for tracking launched intercontinental ballistic missiles. The outlet said that the telemetry tests are an integral part of North Korea's nuclear program development.

Pyongyang reportedly conducted its latest missile launch in November 2017. Last year, Kim announced that the country would suspend its ICBM launches and missile tests ahead of the summits with Moon and Trump.