US President Donald Trump has canceled his delegation's trip to the World Economic Forum in Switzerland, next week, due to the partial US government shutdown, White House Press Secretary Sarah Sanders said in a press release on Thursday.

"Out of consideration for the 800,000 great American workers not receiving pay and to ensure his team can assist as needed, President Trump has canceled his Delegation's trip to the World Economic Forum in Davos, Switzerland", Sarah Sanders said.

On Tuesday, the White House said that US Treasury Secretary Steven Mnuchin would have headed the United States' delegation after President Donald Trump canceled his trip to Switzerland.

Because of the Democrats intransigence on Border Security and the great importance of Safety for our Nation, I am respectfully cancelling my very important trip to Davos, Switzerland for the World Economic Forum. My warmest regards and apologies to the @WEF! 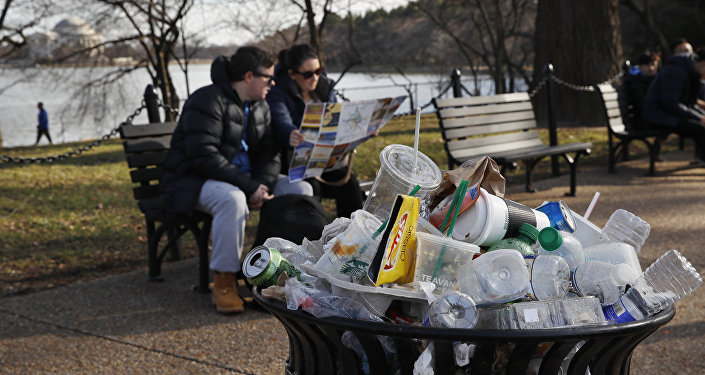 © AP Photo / Jacquelyn Martin
US Voters Back Dems Plan to Reopen Govt Amid Ongoing Border Wall Debates - Poll
Other members of the US delegation would have included US Secretary of State Mike Pompeo, Commerce Secretary Wilbur Ross, Trade Representative Robert Lighthizer and Chris Liddell, who is the assistant to the president and deputy chief of staff for policy coordination.

On Thursday, the US government shutdown entered day 27 as congressional Democrats and Trump continue to be at odds on a new spending bill.

Earlier on Thursday, Trump informed House Speaker Nancy Pelosi in a letter that her upcoming trip to Brussels, Egypt and Afghanistan aboard a military plane will be delayed until the ongoing shutdown of the federal government is resolved. Trump's message to the House speaker comes just one day after Pelosi informed him in a letter that she would delay his scheduled State of the Union address in Congress.

The series of cancellations of high-profile visits comes amid the longest shutdown of the federal government in the US history.

© AP Photo / Mark J. Terrill
Senator Graham Says High Time for Trump to Use Emergency Powers to Build Border Wall
Trump is asking the US Congress to approve $5.7 billion for constructing a wall on the country’s southern border with Mexico as part of the spending bill, while Democrats refuse to provide the funds for a barrier. Trump has refused to reopen the federal government unless Congress provides money to expand an existing border barrier while House Speaker Nancy Pelosi has refused to provide any money for a wall, even if Trump ends the shutdown.

The US president has hinted that he could declare a national emergency in order to secure funds to build a much-anticipated barrier along the border with Mexico, though he has repeatedly said he would prefer to reach a deal with US Congress on the matter.