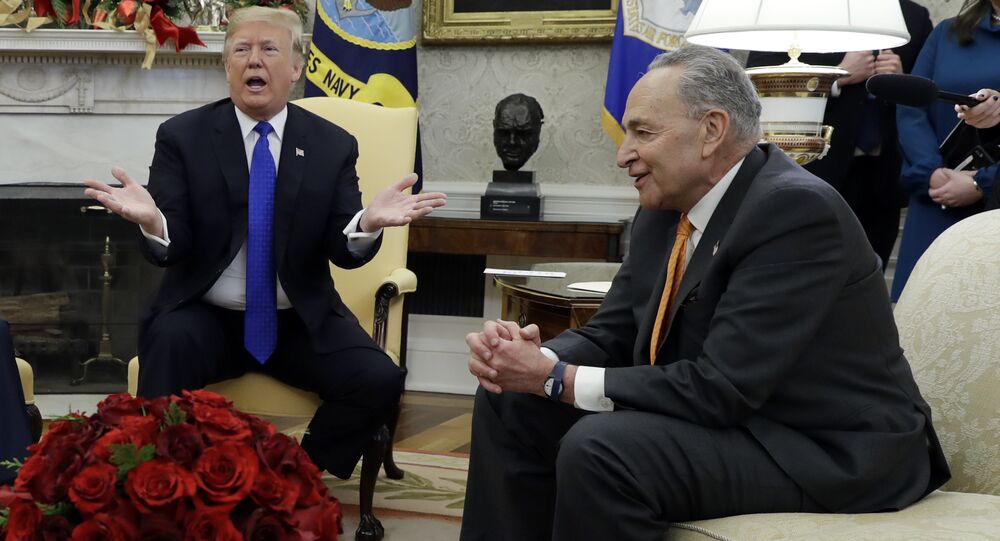 ‘Totally Unhinged’: Trump Says Left ‘No Longer Care What is Right' for US

Earlier, President Trump accused the "Radical Democrats" of being a "Party of open borders and crime" amid the ongoing government shutdown standoff over funding for the US-Mexico border wall.

President Donald Trump has renewed his attack on his Democratic opponents, taking to Twitter to accuse "the Left" of being "totally unhinged," and of "no longer car[ing] what is Right for our Countrty! [sic]"

The Left has become totally unhinged. They no longer care what is Right for our Countrty!

Earlier, US Senate Democratic leader Chuck Schumer and Democratic House Speaker Nancy Pelosi told reporters that Trump's scheduled January 29th State of the Union speech should be delayed if the shutdown, now the longest in US history, continues. Citing constitutional law, Pelosi said that if Trump wants to delivery his speech, he should submit it to the Congress in written form for review.

Trump responded by attacking the "Radical Democrats," and pointing to international practice in building walls.

It is becoming more and more obvious that the Radical Democrats are a Party of open borders and crime. They want nothing to do with the major Humanitarian Crisis on our Southern Border. #2020!

The White House and Democratic leaders in Congress remain deadlocked over the president's requested $5.7 billion in border wall funding. The funding spat led to a partial government shutdown on December 22, which has affected some 800,000 US federal government workers, who have been left working without pay or been furloughed.

© AP Photo / Alex Brandon
'You F**ked It Up': Trump Reportedly Ripped Chief of Staff Amid Shutdown Talks
The shutdown, which was the third to hit the US in 2018, has affected multiple departments and agencies, including Homeland Securtiy, Transportation, Justice, Commerce, State, Agriculture, Interior, the Treasury, Housing & Urban Development, the Environmental Protection Agency, the Food & Drug Administration, and the Internal Revenue Service, among others.

On Wednesday, Trump signed a bill to compensate federal employees who have continued to work for no wages.

The border wall issue was one of Trump's key campaign promises in 2016. Initially, the president promised to make Mexico pay for the wall, threatening to hit Mexico City with tough trade restrictions if they didn't agree. Since then, he has shifted to requesting US federal government funding for the wall, describing it as an issue of national security. Trump's Democratic opponents, who took control of the House of Representatives in November's midterms, have challenged the president on the issue, proposing smaller funding commitments, which the president rejected.