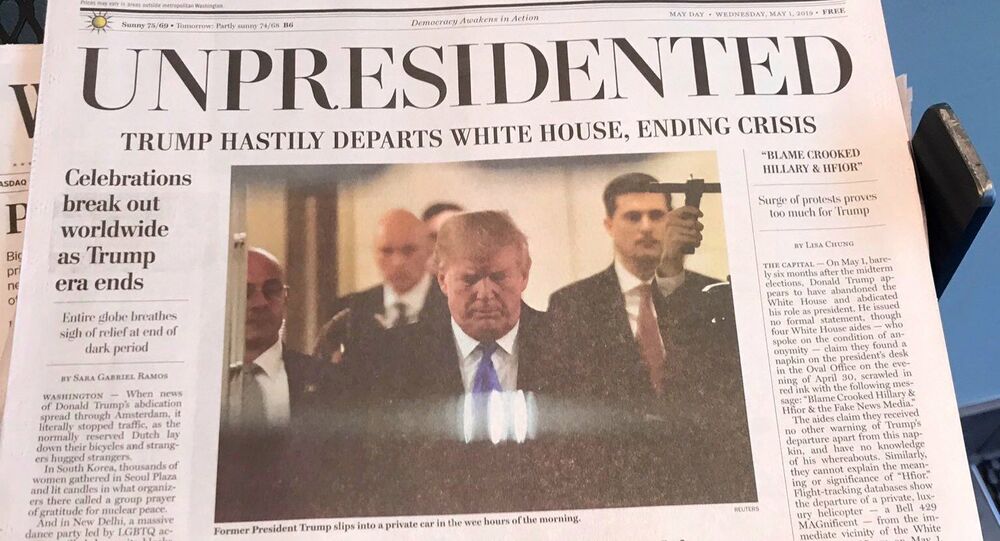 Bogus 1 May editions of The Washington Post filled with anti-Trump stories were handed out in Washington, DC, this week while a website was set up to mimic the influential newspaper. The authors say that the news about Donald Trump's resignation is fantasy rooted in reality.

The non-profit group The Yes Men has pulled off a prank at an "unpresidented" level, with activists passing around fabricated print copies of The Washington Post on Wednesday. The broadsheets, which mimicked the newspaper's old-school typeface, reported, citing "four White House aides", that Donald Trump had abandoned the West Wing without notice amid "massive women-led protests" and civil unrest.

The only message that the fugitive POTUS had left, the fake Washington Post says, was scrawled on a napkin and blamed "crooked Hillary", fake news and the mysterious "Hfior". The hoax story, dated 1 May 2019, hinted that Donald Trump could have left the White House in a helicopter that flew to the Crimean city of Yalta.

"The story this paper tells is more reasonable than our current reality", said writer Onnesha Roychoudhuri, one of the co-authors of the report. "And it's anything but far-fetched. We're already seeing unprecedented levels of protest and resistance. Now we just need to ask ourselves: What's next? This paper offers a blueprint to help us reclaim our democracy."

The real Washington Post has been made aware of the spoof; the newspaper's PR department has alerted its readers about it on Twitter, but some of them are apparently struggling to tell the fake news from real reporting.

There are fake print editions of The Washington Post being distributed around downtown DC, and we are aware of a website attempting to mimic The Post’s. They are not Post products, and we are looking into this.

Most people cannot tell the fake WaPo from the real WaPo.