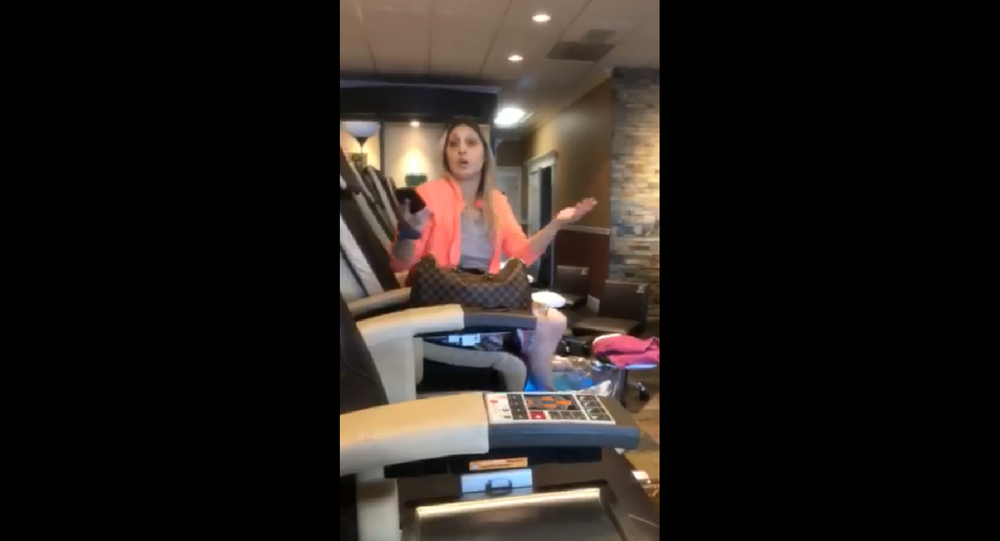 ‘Eat My P***y! Eat It!': US Woman Has Homophobic Tantrum at Nail Salon (VIDEO)

A Washington State woman was recently filmed going on a homophobic rant at the Casabella Spa & Nails salon after she was asked by a fellow customer to not hold a conversation on speakerphone.

FacebookScreenshot/RobinRoether
‘Your Language Sounds Nasty’: US Woman Targets Asian Salon Worker in Racist Rant (VIDEO)
Cellphone footage of the incident, which was filmed and later shared on Facebook by Christopher Brown, shows the unidentified woman in mid-confrontation with Brown after he'd politely asked her to take her phone off speakerphone.

"When I asked her to take her phone off speaker, she looked at me, looked back at her phone call, and then said, hold on, let me take care of this f****t, and then hung up her phone," Brown told local Washington news station KOMO.

And that's where the cellphone recording picks up from.

"Here, let's call 911 and let's get it over, because you're harassing me for no reason, telling me not to be on the phone," the woman says before briefly pulling out her own phone to record Brown. She later begins to complain to staff about the matter.

When the staff member refused to choose sides, the woman decided to leave, yelling a slew of homophobic slurs as she made her way toward the exit.

Brown, who identifies as a member of the LGBTQI+ community, told KOMO News that he was in "complete disbelief and shock" over how the woman reacted to his simple request. "It took about a week of not sleeping, a week of anxiety, a week of worrying what would happen if I didn't act, for me to finally step up."

Footage of the altercation was shared on social media by Brown on January 3. The event took place December 30, 2018.

The Indiana native reportedly moved to Seattle because of the Emerald City's inclusive reputation. On Facebook, Brown wrote that it was important for him to share the footage in order to let others know that "life isn't always sunshine and rainbows for the LGBT community."

The woman in the recording has not yet come forward. The nail salon released a statement to KOMO about the interaction, stressing that Brown acted politely in spite of the woman's verbal attack.