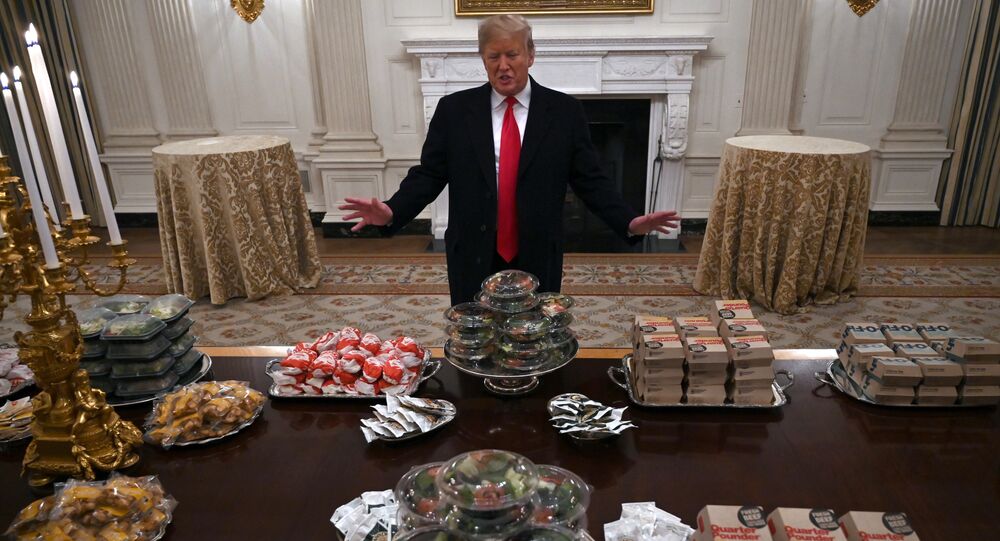 With most of the White House furloughed because of the partial government shutdown, Donald Trump, known as a fast food fan, has thrown a reception for the college football national champions Clemson Tigers with hundreds of Big Macs, whoppers, pizzas, and fries by candlelight.

The US president has decided to share his passion for “great American food” with the NCAA champion Clemson Tigers, serving the collection of burgers, fries and pizzas from US fast food chains at the White House.

​The traditional reception was slightly unconventional because the White House catering staff, who usually provides such events with thought-through menus and delicacies, has been furloughed without pay, like many federal workers across the country, due to the partial governmental shutdown. So Trump decided to provide for the party out of his pocket.

"Because the Democrats refuse to negotiate on border security, much of the residence staff at the White House is furloughed – so the President is personally paying for the event to be catered with some of everyone’s favorite fast foods”, Press Secretary Sarah Sanders’s statement reads.

The president, proud and pleased, showed the feast, served with meals from McDonald's Wendy's, Burger King and Domino's, to reporters before the guests arrived.

“We have pizzas, we have 300 hamburgers, many, many french fries, all of our favorite foods. I want to see what’s here when we leave because I don’t think it’s going to be much”, he said.

When asked about his personal favourite, he didn’t pick a particular brand, saying “If it's American I like it. It's all American stuff”.

While greeting the team, who happened to be visiting him in the White House for the second time, he spilled some details about the reception’s preparation.

“I had a choice: do we have no food for you, because we have a shutdown, or do we give you some little quick salads that the first lady will make along with the second lady, they'll make some salads. And I said, you guys aren't into salads”, he revealed, saying “we have everything that I like, that you like”.

“I appreciated it. It was a kind gesture. Could have given us nothing, I suppose. So, it could have been worse. Just excited for having the experience to be here, really”, 21-year-old sophomore Sylvester Mayers told the Daily Mail.

The reception also turned into a sumptuous feast for netizens, who tore into the treat Trump shared with the players as well as his love for junk food.

This photo of @realDonaldTrump so proud of his redneck banquet is so Talladega Nights. #whatapillock pic.twitter.com/eD6bUtL40K

This is the photo of the Trump presidency. pic.twitter.com/a7zf0avFDg

​​Some slammed the president for being cheap.

McDonald's dipping sauces in sterling silver is the perfect metaphor for the trump White House pic.twitter.com/gLN2DvKpDX

​Trump’s love for junk food and the impact it could have on the health of the 72-year-old commander-in-chief has long been the talk of the town. In the course of his campaign, he posted photos of himself with KFC and McDonald’s food in his private jet and praised the chains in one of his speeches.

"One bad hamburger, you can destroy McDonald's. One bad hamburger and you take Wendy's and all these other places and they're out of business. I like cleanliness, and I think you're better off going there than maybe someplace that you have no idea where the food is coming from", he said during one of the events.

'That is a Dilemma': Trump Says One Thing, Administration Does Another - Prof