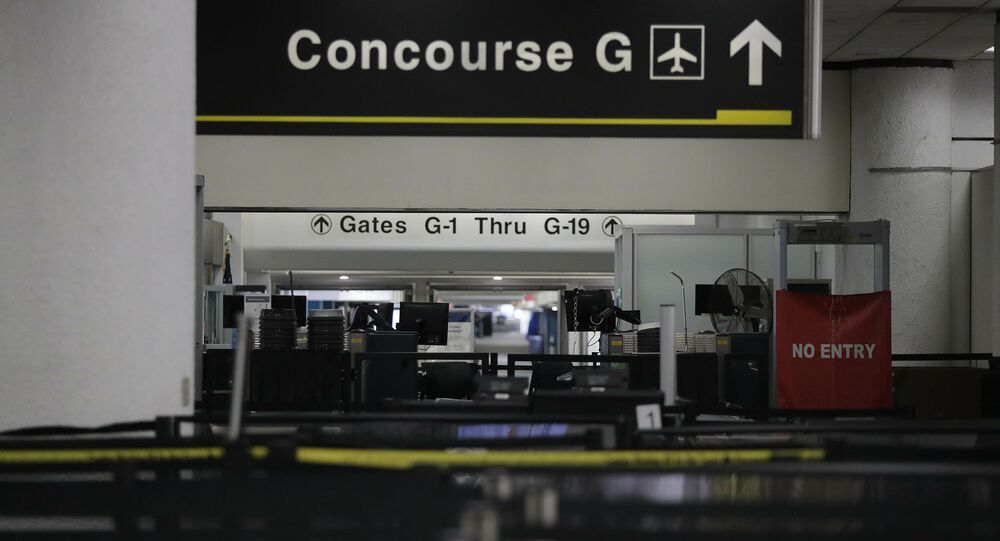 With the partial US government shutdown entering its 24th day, airports across the US are shutting down concourses as Transportation Security Administration (TSA) agents fail to show up to work. The agents won’t be paid until the US Department of Homeland Security, which funds the TSA, is fully funded again.

During the weekend, Houston's George Bush Intercontinental Airport and Miami International Airport (MIA) closed down concourses due to staffing issues related to the government shutdown, the longest closure in the nation's history.

​MIA shut down its Concourse G beginning Saturday, as TSA officials have been calling in sick at twice the regular rate as the shutdown continued, Sputnik previously reported. However, according to the airport's Twitter page, MIA Concourse G returned to normal operations Monday morning, "with the TSA fully staffing the Concourse G checkpoint."

On Sunday, a ticket counter and TSA checkpoint was closed at George Bush Intercontinental Airport's Terminal B due to "staffing issues associated with the partial shutdown of the federal government," according to a statement released by the airport Sunday. Passengers scheduled to depart from Terminal B were diverted to other terminals.

​A security checkpoint was also closed Monday at Washington Dulles International Airport (IAD). According to TSA spokesperson Michael Bilello, "Employee and West Mezzanine checkpoints will close to consolidate into East Mezzanine. TSA Dulles has call-outs attributable to the snow storm. That is slightly higher than a normal snowstorm callout rate."

"We are grateful to all @TSA staff for their dedication to the mission!" the tweet added.

​Travelers at Atlanta's Hartsfield-Jackson International Airport waited in security lines for more than an hour Monday, as six security lanes were closed at domestic terminal checkpoints.

​On Monday, Bilello tweeted that there the rate of unscheduled absences among all TSA staff members was 7.7 percent that day, compared to a 3.2 percent rate on the same date a year ago.

"Most importantly, security standards remain uncompromised at our nation's airports," he added.

More than 51,000 TSA security agents have been working without pay since December 22, after Congress refused to throw its support behind a funding bill that would satisfy US President Donald Trump's demand for $5.6 billion earmarked for a 2,000-mile, 30-foot-tall, concrete border wall with Mexico.

​On Saturday, Bilello also tweeted that TSA Administrator David Pekoske had "processed compensation" to all TSA employees who worked on December 22, "the day immediately following the start of the lapse in funding."

"In addition to this, he [Pekoske] approved awards of $500 for each uniformed screening officer, in recognition of their hard work during yet another busy holiday travel season, maintaining the highest of security standards during an extraordinary period," Bilello added.

​Last week, Trump said he was "very strongly" considering declaring a national emergency if Democrats in Congress refuse to rubber stamp the money for his wall.

"We have a crisis at the border of drugs, of human beings being trafficked all over the world,' Trump said. "They're coming through. And we have an absolute crisis, and of criminals and gang members coming through. It is national security. It's a national emergency."

What Is the US Government Shutdown and What Can Be Done in Washington to End It?