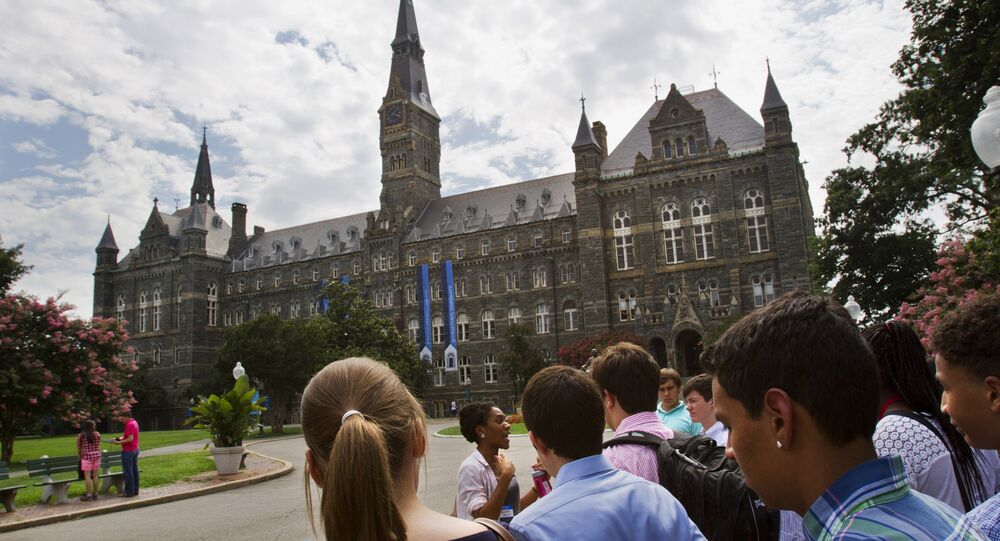 Washington has been accusing Moscow of utilizing methods of hybrid warfare against the US for years, intensifying its rhetoric after the 2016 presidential election amid claims of Russian meddling.

Georgetown University has invited Molly McKew, a writer and expert on information warfare, known for her highly critical stance towards Russia in general and Vladimir Putin in particular, to teach a course called "Russian Hybrid Warfare" in the spring 2019 semester.

The contents of the course look like a textbook for US politicians willing to earn political points by blaming Russia for everything — "patriotic hackers", "little green men", bots, trolls, alleged cyberattacks and other accusations. The course description promises to give students insight into "the Russian doctrine that lays the groundwork for the Kremlin's global imperialist insurgency". The creator of the course claims that it will give students "first-hand accounts" from people situated on "the front lines of identifying and countering the Kremlin's shadow warfare".

Georgetown University has not commented on the introduction of the course.

The news has been met with scepticism among netizens, who noted that hiring a strong anti-Russian specialist would not benefit the level of education at Georgetown University.

Georgetown gives former foreign agent Molly "Russia has a plan to nuke itself" McKew a class on "Russian Hybrid Warfare," ensuring next generation of CIA agents & other standard bearers of US empire gets a worse education. Hiring of this conspiracist signals an empire in decline https://t.co/cExSz7xZIL

Sadly in the US, Russiaphobia has become a career gravy train for anyone willing to play along with the gag: https://t.co/Cq1Up56OMz #Russiagate #Mueller

However, there were those who praised her course as important for "saving lives" in the future.

What you are about to teach could actually save lives in the future. Thank you for enduring the dreariness to do so.

Every University should have a similar course. Is it an undergrad or graduate course? We need history/ civics classes for all undergrads where, at a min, this is a core portion of the curriculum. Glad to see Georgetown is getting ball rolling in the right direction. Good luck!

The US has been accusing Russia of using hackers, bots and internet trolls to wage hybrid warfare against the country, claiming that Moscow meddled in the 2016 presidential election. Special Counsel Robert Mueller has been investigating the allegations, but has so far failed to present proof of that being the case.

Moscow has firmly and repeatedly denied Washington's accusations and pointed out that the US allegations are not based on facts.