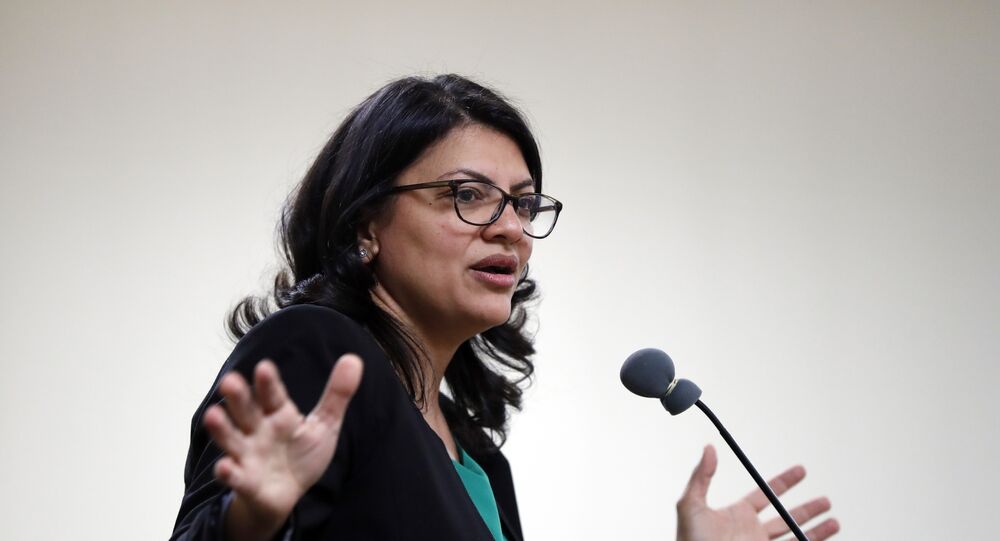 As an estimated 800,000 US federal employees are reportedly starting to feel the pinch of the longest government shutdown in history, calls for the president’s impeachment have started to increasingly arrive, with a number of TV channels opting to prioritize the subject over others, in an attempt to promote their agenda.

American Congresswoman of Palestinian descent Rashida Tlaib received five times more air time on American cable television for her profane remarks on President Trump’s impeachment than Republican Congressman Steve King did for asking why white supremacy is viewed as offensive, liberal non-profit Media Matters for America has found. It estimated that Tlaib's call to "impeach the mother***er" was chewed over by MSNBC, CNN and Fox News for 2.5 hours combined, even long after the comment was made, whereas King’s remarks were covered for half an hour only.

However, they were widely criticized elsewhere, for instance in a fresh op-ed by Republican Senator Tim Scott, the only black Republican in the US Senate.

Separately, conservative analyst Ben Shapiro demanded that King be censured on Twitter and even edited his old article, in which he defended King’s previous remarks on white nationalism.

In an interview with The New York Times published on Thursday, the Republican congressman wondered why such words as “White nationalist, white supremacist, Western civilization” are now considered offensive. “Why did I sit in classes teaching me about the merits of our history and our civilization?” he asked.

The NGO’s finding notably indicates how quickly American media brought up the previously voiced calls for the president’s impeachment, reiterating them again and again, right at the time of the government shutdown. In December, a number of Democrats stated that US President Donald Trump Top may face impeachment or jail term if it is proved that he endorsed illegal hush-money payments to women, charges that come amid pressure on Trump over his alleged collusion with Russia ahead of the 2016 US presidential elections. The president vehemently denied all the above-mentioned allegations, which have never been proved by not a shred of evidence.

He also brushed aside the recent impeachment threats, tweeting:

"How do you impeach a president who has won perhaps the greatest election of all time, done nothing wrong (no Collusion with Russia, it was the Dems that Colluded), had the most successful first two years of any president, and is the most popular Republican in party history 93%?"

The current government closure, which is now on its 23rd day, surpassed a notorious 21-day benchmark on Saturday that was set during Bill Clinton’s term in office. It shows no signs of ending, as Trump and his Republican Party are seen to be at a stalemate with the opposition Democrats, as both sides dig in their heels over budget funds for a border with neighbouring Mexico, which was one of Trump’s biggest campaign promises back in 2016, during the presidential race.

Concerns have been increasingly voiced by the general public, the Democrats, and even Trump’s fellow Republicans that the cost of the government closure is already high. "People are missing pay checks, losing business, or working without pay. Our national parks are overrun with trash. The FDA and FBI warn of the harm to our food safety and national security", Hillary Clinton, who lost to Trump in 2016, noted. Some high-ranking Republicans even jumped ship, namely Senator Lisa Murkowski:

"Shutting down the government is not governing", Murkowski stated before the Senate on Friday.

Later in the day, the House of Representatives voted to approve a measure ensuring that federal workers affected by the shutdown would be paid retroactively when the government re-opens. Trump is expected to sign the bill, which has already passed through the Senate.