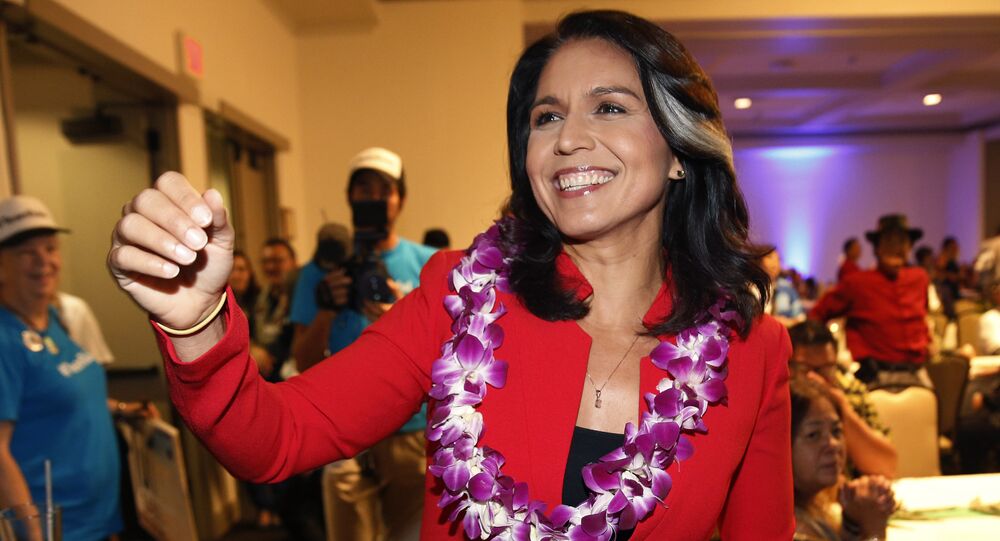 The Tulsi-for-President website says "aloha" to the 2020 White House run, but the unorthodox democrat's candidacy has stirred a hot debate on social media, particularly over her opposition to LGBT rights in the past and a 2017 meeting with Syria's Bashar al-Assad.

Tulsi Gabbard, the Iraq war veteran and Democratic US representative for Hawaii, has decided to run for the White House in the next election.

"I have decided to run [for president] and will be making a formal announcement within the next week," she told CNN's Van Jones.

Gabbard, 37, who stepped down as DNC vice chair in 2016 to support Bernie Sanders in the Democratic Party primaries, has drawn flak from her side of the aisle, largely over her stance on gay rights and the US involvement in Syria.

In January 2017, the lawmaker made an unannounced "fact-finding" trip to Syria and had a sit-down with President Bashar al-Assad. "When the opportunity arose to meet with him, I did so", she said, "because I felt it's important that if we profess to truly care about the Syrian people, about their suffering, then we've got to be able to meet with anyone that we need to if there is a possibility that we could achieve peace. And that's exactly what we talked about."

She was condemned by Democrats and Republicans alike, as the prevailing narrative in the US is that the Syrian president is a war criminal because he purportedly used chemical weapons against civilians.

Damascus and Moscow, meanwhile, say the attack was staged, with the help of the UK, by White Helmets, an NGO which is also accused of helping extremists and filming fake rescue operations in Syria.

Commenters scrambled to call Gabbard, who had spoken out against condemning Assad for his alleged war crimes, on her reconciliatory attitude toward him.

So, Tulsi Gabbard has decided to run for President.

I knew little about Tulsi Gabbard before today.

People I respect tell me she’s a hardcore Assad apologist, a racist Hindu nationalist, a Trump crony, and a former anti-gay activist.

Thank u, next. 🇺🇸

Is she running in the Baath primary?

According to Politico contributor Marc Caputo, the Republican National Committee has dubbed Gabbard Assad's "mouthpiece" in Washington in an internal memo.

“Assad’s ‘mouthpiece’ in Washington” —RNC welcomes Tulsi Gabbard to the presidential race with a moniker that many liberals probably agree with as well pic.twitter.com/WJJrP1aJv1

Left-leaning political journalist Bill Palmer, for his part, branded the congresswoman a "right-wing lunatic" and a "Trump pal", while artist-turned-writer Molly Crabapple accused her of "pro-bombing" positions.

Tulsi Gabbard is where I draw the line. She’s a right wing lunatic, she supports Assad, she’s a Trump pal, she tried to sabotage the DNC from within in 2016, and Russia Today loves her. She’s the one Democrat I will oppose in 2020. She’s not a real Democrat, she’s Steve Bannon.

From Netanyahu to Sisi to Modi to Assad, Tulsi Gabbard has never met a fascist she doesn’t love

Another issue that has done a disservice to Tulsi Gabbard among left-wing voters is her prior stance on gay marriages. "As Democrats, we should be representing the views of the people, not a small number of homosexual extremists," Gabbard was quoted as saying. She is said to have supported in 2014 a constitutional amendment banning same-sex marriage nationwide, but later reversed her opinion and applauded a Supreme Court decision to legalise gay marriage across the US.

However, Gabbard's flipping on LGBT issues has not impressed some social media users.

You know what the 2020 race was missing? Someone who made a ton of anti gay marriage statements and hung out with a murderous dictator. So thank God that Tulsi Gabbard wants to run!

Incidentally, some people have leapt to her defence, praising her for endorsing Bernie Sanders instead of Hillary Clinton in 2016.

Goodness, the Tulsi Gabbard pile on 👀. The voters will decide. It’s going to be a big field. She can run if she wants. Her record will be judged. Give it a rest.

Why do so many liberals hate strong independent women?#TulsiGabbard

Twitter Does Doubletake as Rumored 2020 Candidate Instagrams From Dentist Chair