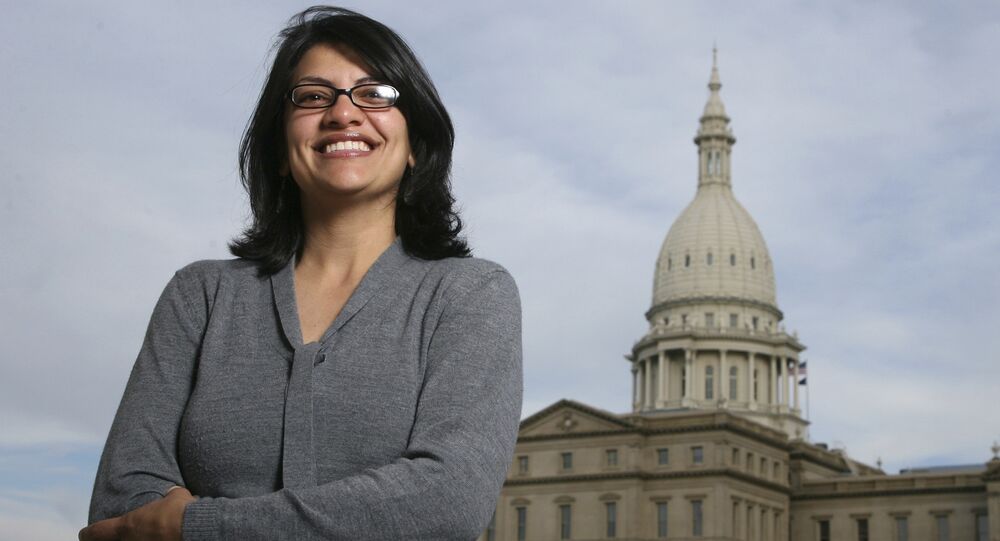 A new congresswoman vowed to impeach President Donald Trump shortly after she was sworn into office. An opponent of US aid to Israel, Rashida Tlaib earlier called POTUS a "racist" and threatened to "hold him accountable".

Rashida Tlaib, the first Palestinian American woman in Congress, was filmed ranting against Donald Trump at an event for the political action group MoveOn, near Capitol Hill, on her first day in Congress.

She recalled a story wherein her son said: "Mamma look, you won. Bullies don't win". She replied, "Baby, they don't. Because we're gonna go in there and we're gonna impeach the motherf***er"; the audience cheered and clapped.

Her comments were condemned by social media users as "hate speech", with some even calling for her resignation.

Wow! Disappointing to see congresswoman speak like this. Trump is no saint but that’s no excuse for us to lower our standard.

Someone in the senate should bar her from serving in Congress

Others believe that such fiery rhetoric could play into the hands of Donald Trump.

If you really don’t like Trump, you shouldn’t like this video, because this does the opposite of hurting him. pic.twitter.com/NLTKyOWbZZ

This is actually great to see. Thank you @RashidaTlaib I have a feeling that Democrats conduct over the next year and a half will push moderates away. Rashida is a blessing in disguise conservatives

Rashida Tlaib, who earlier sat in the Michigan House of Representatives, was sworn in together with other newly-minted congressmen on Thursday. She emphasised her Palestinian roots by donning a traditional red Palestinian gown and swore her oath of office on a Quran that belonged to Thomas Jefferson.

She was elected as Democratic representative for Michigan's 13th Congressional District, which covers parts of Detroit. Before winning the Michigan Democratic primary in august, she voiced support for a two-state solution to the Middle East conflict, but later made an about-face and endorsed a one-state solution while opposing US aid to Israel.

Tlaib is a staunch critic of Donald Trump: in early December, she chided the president's personality and vowed to "hold him accountable". "Look, I truly believe he is racist — and that's probably controversial — he is," she said.

On Friday morning, the congresswoman refused to answer reporters' questions about the remark.