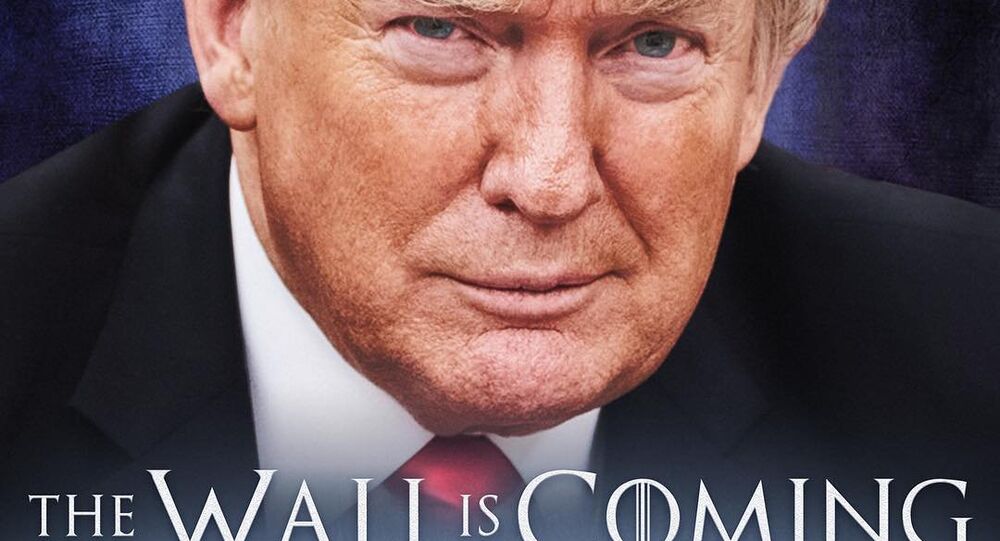 Donald Trump has thrown out a teaser for the construction of his cherished wall at a time when Democrats and Republicans are divided over his proposed border deal.

The POTUS has shared a poster showing himself and the "big, beautiful wall" he wants to build on the US-Mexico border to stop illegal immigrants from entering the country.

The tagline, which features a Game of Thrones-esque gothic font, reads "The Wall Is Coming" — a reference to one of the series' catchphrases, "Winter Is Coming". A wide range of Trump followers enjoyed the meme.

"This is so epic", wrote one user.

"The next season of Game of Thrones looks lit", joked another.

However, a number of social media users rushed to remind Trump that in the last season of the series, the wall that had protected the human kingdoms of Westeros from the dangers of the frozen north was destroyed by an ice-breathing dragon.

Trump talking about "The Wall is Coming"

trump is using the #GameOfThrones meme to say “The Wall is Coming.”
But I guess nobody told him what ends up happening to the wall.

…maybe #SpeakerPelosi will help him out with that.

This comes as a partial US government shutdown is crawling into its third week, as Congress failed to pass a proposed spending bill that had included the $5 billion that Donald Trump had requested for the construction of a wall on the country's southern border — one of his most controversial and widely-debated campaign promises.

A new Democratic-controlled House of Representatives was sworn in on Thursday; it passed a bill to reopen the government agencies without earmarking cash for the border wall. Donald Trump, however, had earlier vowed to veto any bill that would not include the funding he requested, and the Republicans continue to control the US Senate.

Someone in the Trump administration (perhaps POTUS himself) is apparently an avid Games of Thrones enthusiast: another GoT-style poster, saying "Sanctions Are Coming November 5", was seen lying on the table just in front of the president at a US cabinet meeting on Wednesday.

Asked about the "Sanctions are Coming" poster of Pres Trump on the conference table at the Cabinet meeting yesterday, Conway couldn't explain why it was on display. pic.twitter.com/uIGhh3r7mb

Donald Trump published the sanctions poster in early November, three days before the US was slated to hit Iran with new sanctions after pulling out of the Joint Comprehensive Plan of Action.