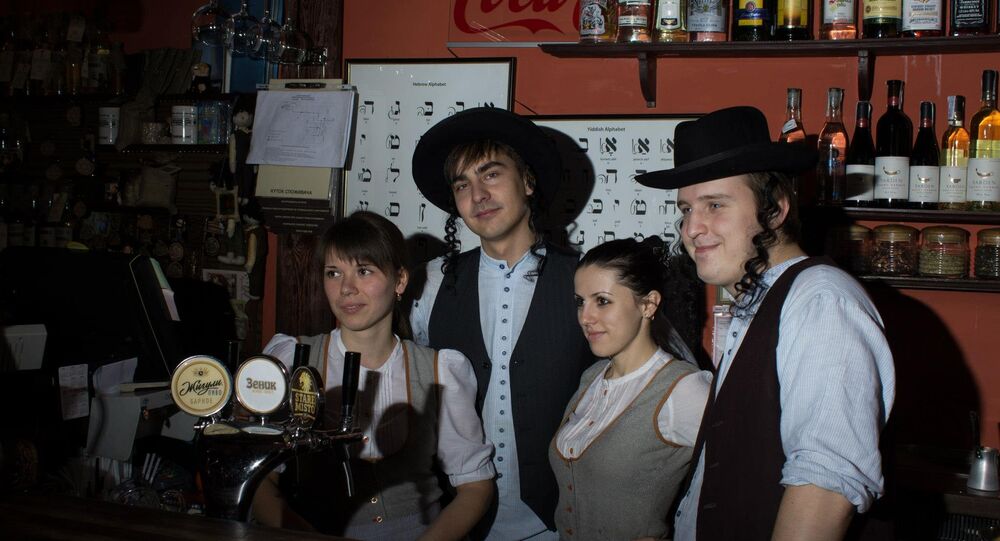 Terrell Starr, a reporter for The Root, a US-based outlet focused on issues faced by the African-American community, styles himself as an expert on Russia and Ukraine. But despite his anti-racist work in the US, Starr’s remarks on international topics over the past few years is colored with anti-Semitic undertones.

On Friday, Starr tweeted out a picture from inside a restaurant he visited in Lviv, Ukraine. "I'm at a Jewish restaurant, in Lviv, called ‘At the Golden Rose,' where customers must negotiate the final bill — there are no prices on the menus. If you're ever in Lviv, visit!" Starr wrote in a since-deleted tweet.

At the Golden Rose is "attached to the ruins of the 16th century Golden Rose Synagogue," a report from April 2016 notes. "It's Jewish tradition to haggle and bargain afterwards," a non-Jewish waiter by the name of Vlodymir told reporter Cnaan Liphshiz. The waiter requested to be referred to as "Moishe," a common Jewish name.

The restaurant's menu refers to Jews as "zhids," the Russian equivalent of the English slur "kike." Staff, including Vlodymir, adorned fake peyots, the curly sidelocks traditionally worn by Orthodox Jews.

But evidence from Starr's Twitter timeline shows that he didn't object to the non-Jewish staff dressing up as cartoonish Jews. For comparison, Starr has repeatedly written articles about white people donning blackface, which is widely considered racist in the US and which he called "a form of theatrical makeup that has a well-documented history of mocking African Americans during minstrel shows for more than 100 years."

The city in Ukraine where the restaurant is located, Lviv, has an even more troubling history of anti-Semitism. It was the site of the first Yiddish-language daily newspaper (established in 1904) and was a major Jewish cultural center in Europe. During one in the wave of pogroms that followed the first World War, 340 people in Lviv — many Jewish — were killed. Still, the population was about one-quarter Jewish, with well over 100,000 Jewish residents, but not for long.

About 6,000 to 10,000 Jews were slain in mass killings in the Lviv area after the city fell to the Nazis in 1941. Members of the Organization of Ukrainian Nationalists, led by Nazi collaborator Stepan Bandera, carried out the massacre. Later, Nazis and allied forces established the Lviv Ghetto next to where At the Golden Rose stands today, as well as an extermination camp just outside the city. By the end of the war, all but 200 to 800 of Lviv's Jews had either been killed or fled the city.

The Organization of Ukrainian Nationalists' slogan proclaimed "Long live Ukraine without Jews" and called for sending "Jews to the gallows." Nevertheless, amidst Ukraine's post-Maidan neo-Nazi renaissance, Bandera has been celebrated as a national hero, and Lviv, from which he hailed, officially declared 2019 to be "the year of Stepan Bandera."

"So, apparently this restaurant I'm at is very controversial (something I didn't know), so I've deleted the pics. And thanks to the folks who literally gas lit me," Starr tweeted after deleting his previous tweet from inside the At the Golden Rose restaurant, drawing, perhaps inadvertently, comparisons between himself and the 6 million Jews who were killed in the Holocaust. The most famous method of extermination used by the Nazis was, of course, the gas chamber.

Starr has mostly made a name for himself for his coverage of racism inside the United States, but when he's not upholding the mantle of anti-racism in America, he's stumbling blindly into racist tropes in Eastern Europe or pushing anti-Russian narratives reminiscent of the Cold War.

Those articles use headlines like "How Russia Used Racism to Hack White Voters" and "Russia Is Pretending to Have a Presidential Election."

Back during the Maidan revolution in Kiev in 2013, Starr promoted Right Sector in a deleted tweet. Right Sector was the name of a group formed by the coalescence of hooligans turned paramilitaries and various neo-Nazi and ultranationalist organizations — and even forces sympathetic to Daesh. Earlier this week, the group was linked via video evidence to a massacre during the uprising.

In the past few years, he also tweeted a meme of Russian President Vladimir Putin superimposed over a Soviet flag, but instead of a five-pointed star placed above the hammer and sickle, it was a Star of David. He has claimed that Russians are "unable to overcome their slavicness" and accused the Soviet Union of creating "official plans to kill Jews" and of being "as bad about killing Jews as Nazi Germany."