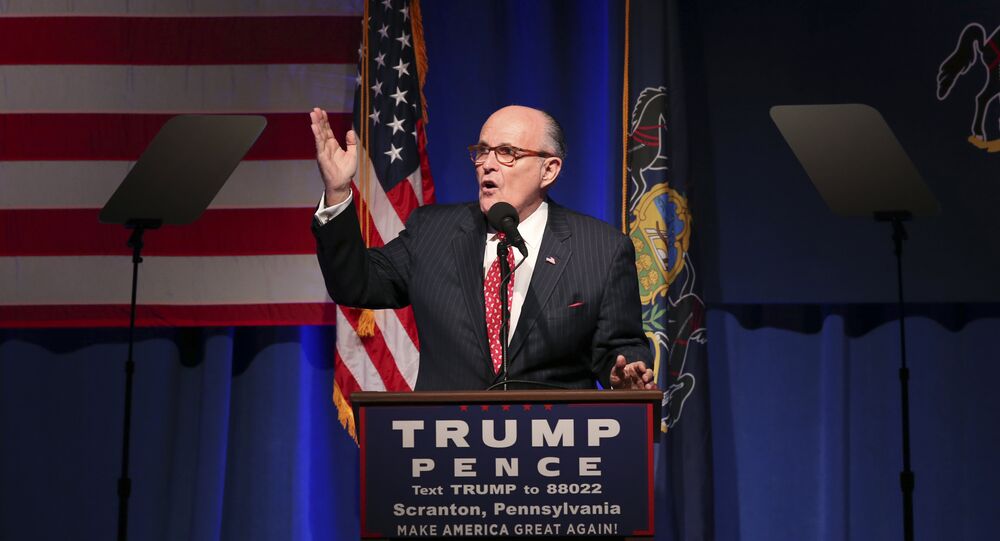 Rudy Giuliani, US President Donald Trump’s defense attorney, is calling for an investigation into special counsel Robert Mueller over the destruction of evidence relating to Mueller’s probe into allegations of collusion between members of the Trump campaign and Russia.

In particular, Giuliani bemoaned to The Hill earlier this week the handling of text messages belonging to fired FBI agent Peter Strzok, who was the lead investigator in the Russia probe prior to it being taken over by Mueller in May 2017. Strzok sent damning text messages to another FBI employee on the case, Lisa Page, with whom he was having an affair.

Strzok promised Page they'd "stop" Trump from becoming president and the two exchanged a number of critical remarks about him, as well as disparaging statements about Russians.

Earlier this month, the Justice Department's Inspector General (IG) released a report finding a "technical glitch" to be behind the mass deletions of messages from Strzok's device. Messages from before Mueller took over the probe — some 19,000 in fact — were recovered, but messages sent afterward are gone with the wind.

That's because both Strzok's and Page's FBI-issued phones were wiped by technicians working for Mueller, which the IG report claims was part of a regular process unrelated to the content of the messages on the phones.

"Mueller should be investigated for destruction of evidence for allowing those text messages from Strzok to be erased, messages that would show the state of mind and tactics of his lead anti-Trump FBI agent at the start of his probe," Giuliani said earlier this week.

Giuliani went on to slam the infamous Steele dossier and call out investigators for relying on that "piece of garbage" that was paid for by Hillary Clinton and the Democratic Party, and for using it to obtain a warrant to electronically surveill members of the Trump campaign.

"Do I think that is improper? Yeah, that borders on — that sounds to me a lot more like a false statement than some of the ones they charged," Giuliani said, referring to Mueller's successful prosecutions of Trump allies like former national security adviser Michael Flynn for making false statements to the FBI or Congress.

Giuliani went on to discuss the audio tape in which Trump and his former longtime attorney Michael Cohen discuss payments to two women who say they had an affair with Trump before he was president. The tape ends midway through the conversation and Giuliani suggested that the missing portion contains exculpatory statements from the president.

He went on to say that if Mueller's team requests any additional written responses from Trump he would advise the president to refuse them in order to avoid "a perjury trap."

The president's lawyer said that he is confident that there was no collusion between Trump's campaign and Russia and that the special counsel's scrutiny of Trump confidant Roger Stone for his communications with WikiLeaks about hacked emails from Hillary Clinton shows that the probe is off its course.

"We're now four degrees of separation from the original mandate of the investigation, which was collusion, which did not occur," Giuliani said.