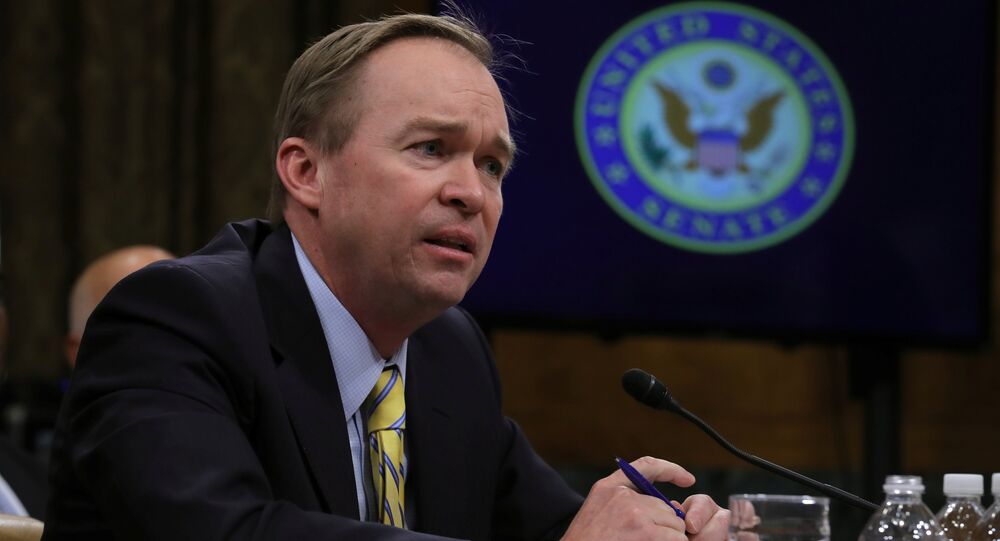 In 2016, Mick Mulvaney publicly berated then-candidate Donald Trump over the latter’s scandalous comments against women, although the former’s strident criticism did not stop him from serving in Trump’s administration.

Mulvaney, current director of the US Office of Management and Budget, has recently been named as acting White House chief of staff by Trump. The newest Trump appointee dismissed the controversy over his 2016 remark that the president is a "terrible human being."

Talking to ABC Sunday, Mulvaney affirmed that he and Trump laughed about the comment on Saturday night.

© CC BY 2.0 / Jeff Turner / The Mall - Washington DC
Amid Govt Shutdown Trump Notes 'Slow, Highly Coordinated' Call With Erdogan on Syria Withdrawal
Mulvaney in 2016 berated then-candidate Trump over a 2005 recording that revealed the future US leader making lewd comments about women, including his now-famous remark: "grab them by the pussy." Mulvaney's vocal disgust with Trump was recorded on video, and has since re-emerged — quickly going viral — after the president named him White House chief of staff.

"Yes, I am supporting Donald Trump, I'm doing as enthusiastically as I can [even though] I think he's a terrible human being," Mulvaney said in the 2016 video, as he debated against his Democratic rival.

From calling Trump "a terrible human being" to serving as his chief of staff in two years flat https://t.co/jrZM9xpD35 pic.twitter.com/f3VaNq794d

​"But the choice on the other side is just as bad," he added.

Speaking in an interview with ABC News, Mulvaney acknowledged that the video "made the rounds," but waved his hand dismissively, saying that he and Trump had "joked about it last night."

"Look, I think what's wrong with Washington DC — people spend a lot more time looking at what people say instead of what they do," Mulvaney said in the interview, adding that the president "knows that I have been fighting with him to fight for ordinary Americans for the last two years."

"He likes having me around and I like working for him," he declared.

© AP Photo / Gregory Bull
‘4th Century Strategy’: Senator Notes Failure of Trump Border Wall Demand
In 2016, many Republicans — and much of the world — denounced Trump's misogynistic remarks, with some GOP lawmakers withdrawing their support of the candidate's campaign. Mulvaney has given the appearance of following the tide, writing in a now-deleted Facebook post excoriating Trump about the 2005 recording.

"What he said in the audiotape is disgusting and indefensible," Mulvaney posted at the time, adding, "My guess is that he has probably said even worse."

Despite his criticism of Trump, Mulvaney has served as director of the Office of Management and Budget (OMB) since the earliest days of the Trump administration. In November 2017, he was appointed acting director of the Consumer Financial Protection Bureau (CFPB).

"This is old news," Burris said, according to NBC. "These comments were made in 2016, when he was a congressman and had yet to meet the president. Congressman Mulvaney continued to support then-candidate Trump throughout the election, and his support for President Trump has never wavered while serving within the administration. He both likes and respects the president, and he likes working for him."

Professor on Trump's Syria Pullout: 'Generals Were Caught Off Guard'