WASHINGTON (Sputnik) - US lawmakers from both sides of the political aisle condemned the Trump administration's policies including the withdrawal from Syria for pushing US Defense Secretary James Mattis to resign.

"President Trump is plunging the country into chaos," Senate Minority Leader Chuck Schumer said on Thursday. "The market's down another 500 points, General Mattis is stepping down and we know he has real disagreements with the president in Syria and on the wall." 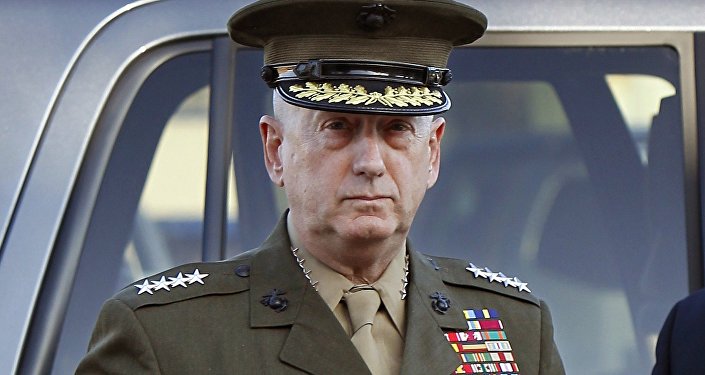 © REUTERS / Mike Blake
Defense Secretary James Mattis to Leave White House in February
Schumer added that Mattis was one of a few symbols of strength and stability in the administration which is now in chaos.

Republican Senator Marco Rubio said Mattis' resignation makes it clear that the United States is headed towards a series of grave policy errors that will endanger the country, damage its alliances and empower its adversaries.

Senator Dick Durbin said the United States has lost the "adult in the room when the President goes off on a tweet-filled, uninformed rant about our national security."

Senator Lindsey Graham said via Twitter that Mattis is a man of intellect and integrity, who had been in the fight against radical Islam for decades and provided sound and ethical military advice to Trump.

READ MORE: Mattis Disagrees With Trump on US Withdrawal From Syria — US Senator

Speaker of the House of Representatives Paul Ryan said the United States has become a safer country at home and a more commanding force overseas with Mattis serving as the head of the Department of Defense.

On Thursday, Mattis in a resignation letter said he was stepping down at the end of February citing the fact that Trump needed to find a defense chief whose views were more aligned with his own. The move came a day after the White House said the United States was withdrawing troops from Syria.

© REUTERS / Rodi Said
Neocons Enraged by Withdrawal of US Troops From Syria
"Because you have the right to have a Secretary of Defense whose views are better aligned with yours… I believe it is right for me to step down from my position," Secretary Mattis' letter to Trump said on Thursday.

© AP Photo / APTV
Washington to Continue to Pressure Damascus, Tehran After US Troops Leave Syria - Senior US Official
The United States must provide effective leadership to its alliances, Mattis said. He pointed out NATO and the Defeat-Daesh terrorist group coalition.

Mattis recommended that a full transition to a new Secretary of Defense occur well in advance of the transition of the new Chairman of the Joint Chiefs of Staff in September in order to ensure stability in Defense Department. Mattis will be retiring at the end of February. The announcement came shortly after Trump's decision to pull out all US troops from Syria.