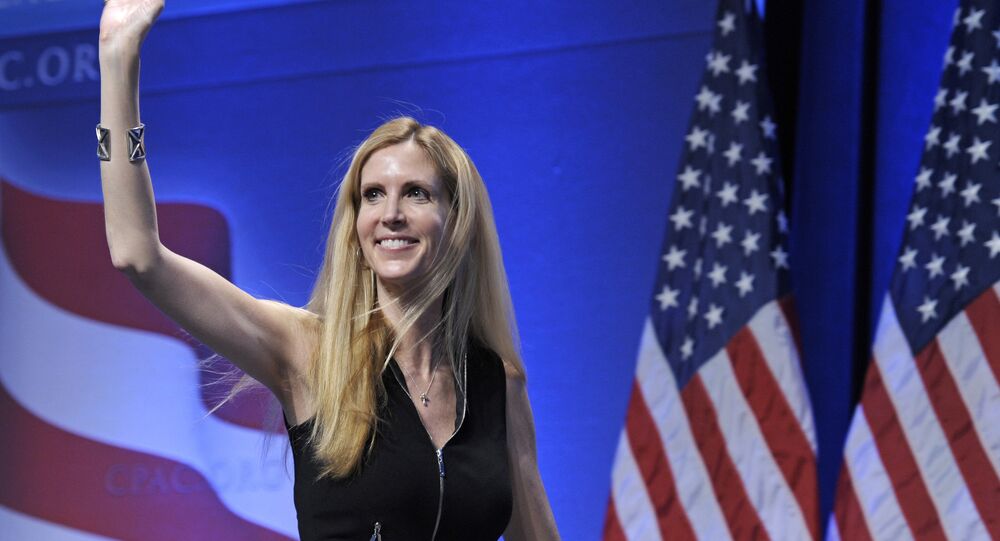 The well-known writer and columnist, Ann Coulter, generally supports the Republican right-wing agenda and vehemently backed Trump’s campaign promise to build a wall on the Mexican border; however seeing no progress to this end, she publicly doubted any Republican candidate whatsoever winning in the upcoming 2020 election.

POTUS is no longer following American conservative social and political commentator Ann Coulter on Twitter after she publicly announced she would not support Trump’s re-election bid if no progress had been achieved on the Mexican border issue by 2020.

This became known after a tweet by @Trumpsalert, which describes itself as a bot tracking the Trump family‘s activity on Twitter and boasts an over 70,000-strong army of subscribers. Meanwhile, the automatic account couldn’t specify if it was an unfollow, suspension, or block.

© Sputnik / Evgeny Biyatov
From Kerch Strait and Anti-Russian Sanctions to US Withdrawal From Syria and Meeting With Trump: Highlights of Putin's Year-End Presser

In her fresh column announced on Twitter, Coulter referred to Trump as a “gutless president in wall-less country,” thereby hinting at Trump failing to make good on his long-standing campaign promise.

"It is now crystal clear that one of two things is true: Either Trump never intended to build the wall and was scamming voters all along, or he has no idea how to get it done and zero interest in finding out", Coulter wrote, going on to say that Trump sacrificies every opportunity to "make the wall happen".

Separately, during a recent podcast interview with the Daily Caller, the conservative pundit, who regularly updates articles on her personal website, lashed out at Trump’s presidency billing it “a joke” that will leave “no legacy whatsoever", but more than likely will “amuse the populists for a while” and “scam the American people".

“Why would you [vote for him again]?” the provocative author and columnist asked. “To make sure, I don’t know, Ivanka [Trump] and Jared [Kushner] can make money? That seems to be the main point of the presidency at this point", the writer and columnist noted adding that the US of the future is a country where no Republican will be elected president.

Trump, whose page on Twitter is followed by over 56 million people around the world, in turn has subscribed to merely 45 accounts, including those of Fox News hosts Tucker Carlson, Sean Hannity, and Laura Ingraham; administration members Vice President Pence, advisor Kellyanne Conway and press secretary Sarah Huckabee Sanders, as well as his family members, the official White House twitter and that of the Trump Organisation.

READ MORE: 'We Will Win on the Wall' Against the Democrats — Trump

The US-Mexican wall has been a stumbling block in American domestic policies, as well as in the countries’ ties ever since Trump took office, with POTUS persisting in his calls and even threatening to close parts of the US-Mexico border in light of a nearly 6,000-strong caravan of Central American migrants in the city of Tijuana, in Mexico, just south of California. US authorities have deployed several thousand troops to prevent the caravan from crossing into the country.