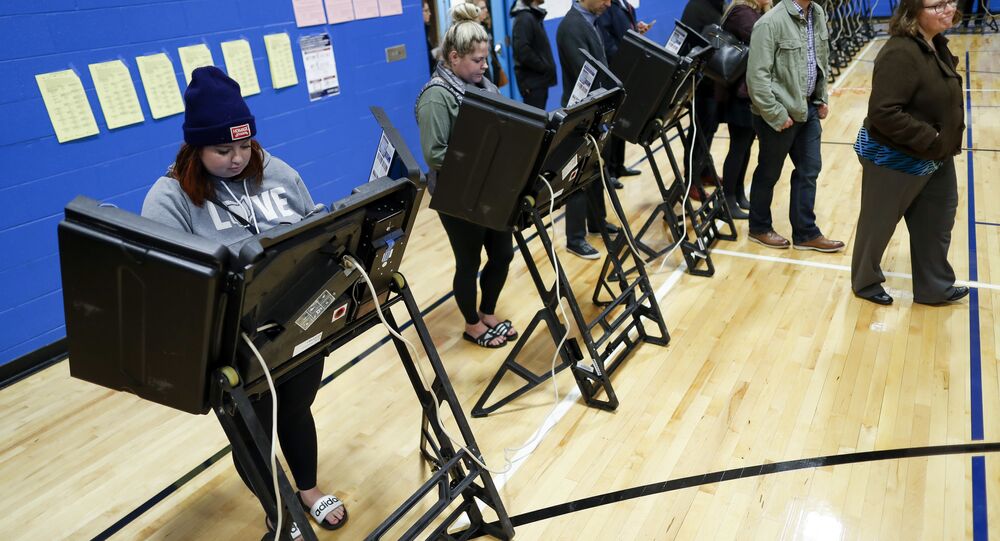 The United States also imposed sanctions against Federal News Agency's senior accountant Elena Khusyaynova. The Treasury noted that several designated entities and individuals are linked to Project Lakhta. This project is allegedly funded by businessman Yevgeniy Prigozhin who is currently designated under US financial sanctions.

© REUTERS / Shannon Stapleton
US Treasury Sanctions 15 GRU Members for Alleged Election Interference
"Since at least 2014, Project Lakhta has used among other things, fictitious online personas that posed as US persons in an effort to interfere in US elections, as the IRA [Internet Research Agency] did during the 2016 US election," the release said.

Khusyaynova has served as the Chief Accountant in Project Lakhta's finance department and was responsible for its budgeting and payments for social media procedures, advertising and other expenses, the Treasury said.

"USA Really, which is operated by Malkevich, engaged in efforts to post content focused on divisive political issues but is generally ridden with inaccuracies. In June 2018, USA Really attempted to hold a political rally in the United States, though its efforts were unsuccessful," the statement said.

© CC0 / Pixabay
Integrity Initiative 'a Cheapjack British Troll Factory' – Commentator
Based on this activity, the release added, USA Really was designated for being owned or controlled by the Federal News Agency while Malkevich was designated for "having acted or purported to act for or on behalf of, directly or indirectly, USA Really."

The United States has levied sanctions against Russia for allegedly meddling in US elections in 2016 and 2018. Moscow has repeatedly refuted such allegations as groundless domestic political stunts designed to fuel anti-Russian hysteria.

US Treasury to Lift Sanctions on Russia's Rusal, EN+