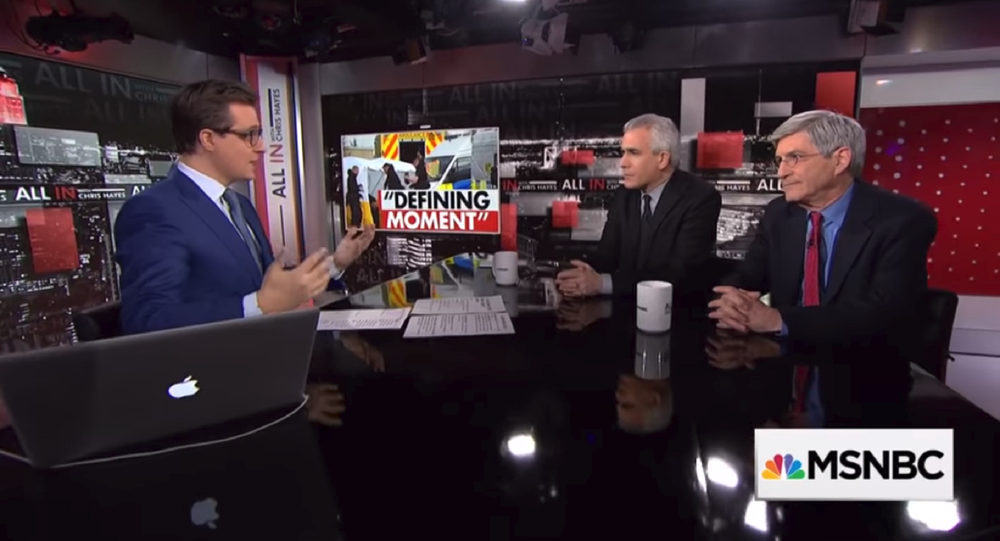 It’s been well over two years since the FBI began probing the Trump administration and alleged Russian meddling in the 2016 election. The main allegation currently being investigated by special counsel Robert Mueller, of collusion between members of the Trump campaign and the Russian government, is now falling apart.

The latter mandate includes allegations like Russian meddling independent from the Trump campaign, the president's potential obstruction of justice and campaign finance violations as well as a host of crimes that were committed long before US President Donald Trump announced his candidacy for the presidency.

Those mandates have resulted in numerous indictments for Mueller and even guilty pleas in the case of former National Security Advisor Michael Flynn, former low-level adviser to the Trump campaign George Papadopoulos and former campaign chair Paul Manafort, and even the indictment of alleged Russian spies and alleged Russian trolls accused of meddling in the election by stealing emails from Hillary Clinton's campaign manager John Podesta and the Democratic National Committee.

Moreover, the effectiveness of the alleged social media campaign to promote Trump is dubious, to say the least. Leading American political commentator and statistician Nate Silver took to Twitter on Tuesday, saying, "If you wrote out a list of the most important factors in the 2016 election, I'm not sure that Russian social media memes would be among the top 100."

"The scale was quite small, and there's not much evidence that they were effective," Silver added.

Even US National Public Radio, by no means a home to alternative viewpoints on issues of foreign policy and national security, conceded late last week that Mueller's case "looks weaker than ever."

Now, the journalist who was the first to report on many of the allegations contained in the infamous Steele Dossier is expressing his strong skepticism as to their veracity.

That journalist is Michael Isikoff, the chief investigative correspondent at Yahoo! News and co-author of the book "Russian Roulette: The Inside Story of Putin's War on America and the Election of Donald Trump."

Isikoff gave an extensive interview over the weekend to Free Speech Broadcasting, wherein he cast doubt on the idea of Mueller ever charging anyone with crimes related to collusion. He did note that his assessment was "tentative" and that more might come to light that could change it. But as it stands now, Isikoff says, many of the allegations in the Steele Dossier "will never be proven and are likely false."

In the wide-ranging interview, Isikoff spoke to why he thinks the current states of the legal sagas of the key players in Mueller's probe so far indicate that there isn't that much more brewing, and it's probably not collusion.

Isikoff noted the irony of how the Russiagate saga has developed. The narrative began with the explosive Steele Dossier, which alleged that Russia had compromising materials (Kompromat) on Trump. "What was the allegation that got everybody worked up about Trump and Russia from the get-go? That was the sensational, still uncorroborated allegation in the Steele Dossier that Trump had prostitutes in his hotel room in Moscow urinating on each other and that the FSB [Russia's domestic security organization] had a tape of it," Isikoff said. "So it was sexual Kompromat that existed on Donald Trump that really kicked off the Russia story into outer orbit, shall we say."

But instead of Russian President Vladimir Putin having "sexual Kompromat" on Trump, "it was the National Enquirer."

Isikoff was then asked by host John Ziegler whether he "would agree that a lot of what's in the Steele Dossier has been somewhat vindicated. Would you agree with that assessment?"

"No," he replied flatly.

"I think in broad strokes Christopher Steele was clearly on to something, that there was a major Kremlin effort to interfere, that they were trying to help Trump's campaign and that there were multiple contacts between various Russian figures close to the government and various people in the Trump campaign," he said.

But, "when you actually get into the details of the Steele Dossier, the specific allegations, we have not seen the evidence to support them, and in fact there's good grounds to think that some of the more sensational allegations will never be proven and are likely false," the veteran investigative reporter said.

"People have made Herculean efforts to verify various aspects of the Steele Dossier," Isikoff said of his Russiagate reporter peers.

In the case of Michael Cohen, formerly Trump's personal attorney, "it's already clear that the government has said that Michael Cohen committed two federal felonies in coordination with and at the direction of Donald Trump. That's clearly very serious," Isikoff said.

"But — and there's a big but — we don't know exactly what Cohen's testimony is about his conversations with the president, then-candidate Trump, that led him to make the payments he did. He has said… that the president knew it was wrong, but in what sense did he know it was wrong? Did he know it was a violation of campaign finance laws? Did a discussion of the 2016 elections specifically come up when he directed Michael Cohen to make these payments? I think a lot rests on that," Isikoff said.

"Michael Cohen's word against Donald Trump's word is a contest between two people with very low credibility," he added. "Trump's problem is that the federal prosecutors in New York have deemed this to be a campaign finance violation, and a felony at that. Now, there are a lot of legal questions about whether that will ultimately hold up."

Isikoff went on to throw more doubt on "the claim that Michael Cohen flew to Prague to meet with various Kremlin figures to discuss coordination between the Trump campaign and the Kremlin."

Cohen "wasn't charged with lying about his denials about ever flying to Prague to meet with Russian figures. After you get through the pee tape, the Michael Cohen allegation in the Steele Dossier may be the next most important one," he continued.

If Cohen were spilling the beans on collusion, Mueller would have held off on sentencing him, Isikoff argued. Mueller is "not using Michael Cohen for another case because they wouldn't have allowed the sentencing to go forward."

"I do think it's odd that two witnesses — two very important witnesses, Michael Cohen and Michael Flynn — are going to sentencing without us seeing them in federal court testifying against somebody else, because normally that wouldn't happen," he said.

Isikoff then spoke about the case of Mariia Butina, who was never charged under the Mueller probe but was accused in the media of having helped Russia funnel money to the Trump campaign via the National Rifle Association (NRA).

"What got me and a lot of other people worked up about the Mariia Butina case from the get-go," Iskoff said, was "the possibility" that she was helping to funnel money and "that part of that $30 million, an unprecedented amount that the NRA spent in the 2016 election to help elect Donald Trump, was foreign money from the Russians laundered by Alexander Torshin with the assistance of Mariia Butina."

"It would have been the biggest campaign finance crime ever," Isikoff said. "If it were true, Mariia Butina would have been right in the middle of it, and they would not — they, the government — would not have let her plead to a relatively minor charge of failing to register as a foreign agent," he said.

"That tells me that the government doesn't have the evidence to back up what a lot of us suspected, that Russian money may have gone into the NRA's coffers to help elect Donald Trump," Isikoff concluded.

Ziegler then told Isikoff, "It sounds to me like you think the case for ‘collusion' is imploding."

Isikoff didn't directly answer the question. He said that the evidence of Russian meddling is "rock solid," citing the alleged GRU hackers — who, it should be noted, are presumed innocent until proven guilty.

"I think that the evidence is growing that we're not going to" see collusion charges against Trump, Isikoff said. "The sentencing memos are like Rorschach tests," Isikoff said, arguing that different reporters can get different takes from the same document. "Yes," the media is guilty of confirmation bias, he said.