WASHINGTON (Sputnik) - The United States has pledged to provide $5.8 billion in aid to El Salvador, Guatemala and Honduras in order to promote economic growth and security, the State Department said in a press release on Tuesday.

"The United States is committing $5.8 billion through public and private investment to promote institutional reforms and development in the Northern Triangle," the release said.

© REUTERS / Hannah McKay
Backlash as Fox News Host Says Immigrant Caravan Carries Diseases to US
The bulk of the funds will come through the Overseas Private Investment Corporation (OPIC), the US government's development finance institution. OPIC has already invested more than $1 billion in the region since 2017 and is prepared to spend up to $2.5 billion more if commercially viable projects are identified, the release said.

Meanwhile, the Millennium Challenge Corporation, an independent US foreign aid agency created by Congress, is providing $320 million in funds for infrastructure, education and governance projects, the release said.

The State Department and US Agency for International Development (USAID) for their part have already allocated at least $1.8 billion in funds for fiscal years 2015-2018 and have requested another $180 million for fiscal year 2019, the release said. 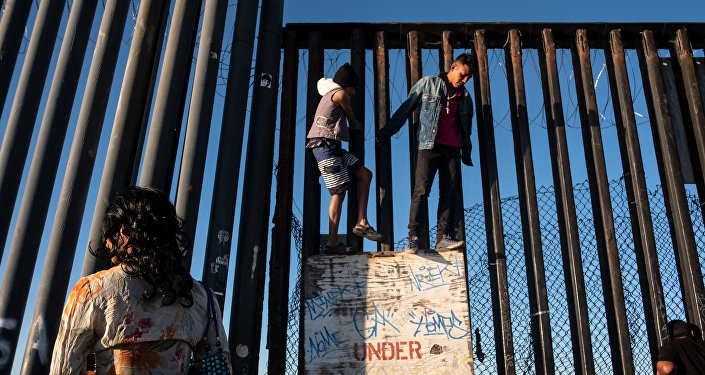 © AFP 2019 / Guillermo Arias
WATCH Migrants From Caravan Climbing Fence on US Southern Border
US efforts will focus on promoting security, good governance and prosperity, in line with the Northern Triangle governments' Alliance for Prosperity reform initiative, the release added.

A High-Level Task Force will be appointed in 2019 in order to intensify cooperation between the US, Mexico and other Central American governments in order to "lead our efforts and produce result," the release added.

Since October, thousands of migrants from Honduras, Guatemala, and El Salvador, have arrived at the US-Mexico border, with many of them seeking asylum in the United States.