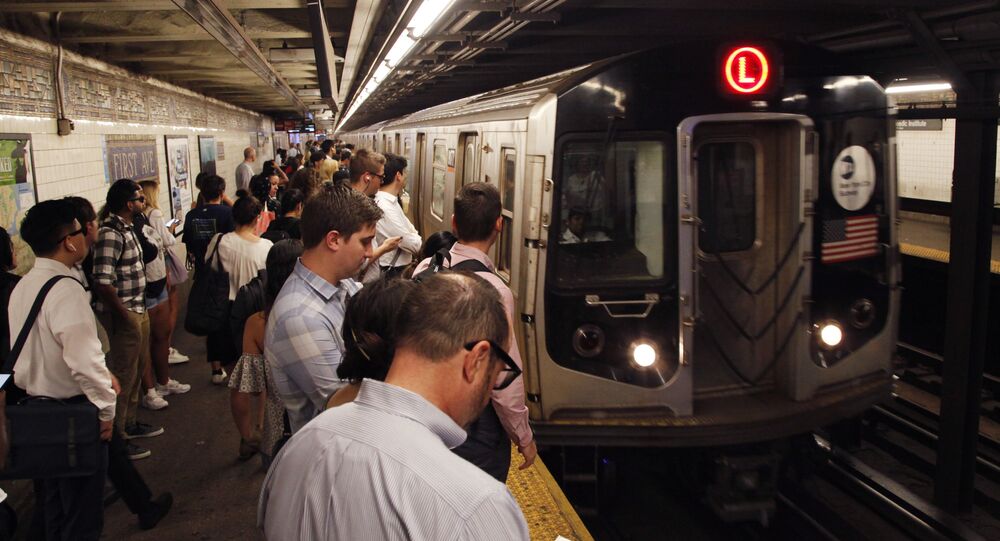 A morning commute on a busy Brooklyn subway train on Tuesday turned chaotic after a woman assaulted and hurled racial slurs at two people, videos posted to social media show.

The assailant — 40-year-old Anna Lushchinskaya — was charged with felony assault, NYPD Chief of Transit Edward Delatorre announced on Twitter. Lushchinskaya was turned over to police custody after she was the subject of a citizen's arrest by a fellow straphanger whom she had targeted.

The first video begins with Lushchinskaya repeatedly yelling "f**k off" at a woman looking down at her cell phone.

Lushchinskaya then takes off her sunglasses and puts her hair up before pulling an umbrella out of her bag. Then, unprompted, she starts kicking the other woman.

That's when fellow straphangers intervened. "They're not letting me hit her back," Lushchinskaya yells, although the other woman was nonconfrontational throughout the videos.

Lushchinskaya continues to kick the woman and hit her despite the attempts by passengers to keep her at bay. "It's too early for this s**t," one passenger says. "She's not even fighting you back."

The man holding the camera — identified as Juan Ayala — then turns the camera towards himself, proclaiming that it's "too early for this s**t."

Lushchinskaya then spits and attempt to call the police. After the woman who was repeatedly attacked by Lushchinskaya called her a "white b***h," the assailant used a racial slur to describe the woman, who is Asian.

A number of fellow passengers then scold the woman for being "racist."

Passengers then comment on the woman's "severe mental issues" and the probability of her having voted for US President Donald Trump.

Video posted by another Twitter user shows Ayala closer to the woman, asking her whether she was going to pick a fight with everybody on the train, with his camera in front of her face. "Say what's up to World Star," he says, before Lushchinskaya spits again. World Star Hip Hop is the name of a website known for posting videos of viral beatdowns.

YouTubeScreenshot/JahangeerKhan
‘We’re Fighting Back:’ US Subway Riders Beat Up Conductor For Only Making Express Stops (VIDEO)

"B***h I'm Dominican," he tells her. "Did you just try to call me Muslim or some s**t? I just had a bacon egg and cheese yesterday."

"Literally the whole world is laughing at you," he tells her before she swats at his headphones. Then, Lushchinskaya knocks Ayala's phone out of his hands, and he tackles her to the ground.

In a picture posted later by Ayala, he's seen holding Lushnskaya's hands behind her back. In another picture, she's being detained by police. "She tried me so I had to detain her until the cops showed up," he wrote.

Police said Ayala had minor injuries following the incident and the first woman attacked by Lushchinskaya was left with a bloody face.

Authorities also say that Lushchinskaya was involved in another incident on the same train in June.