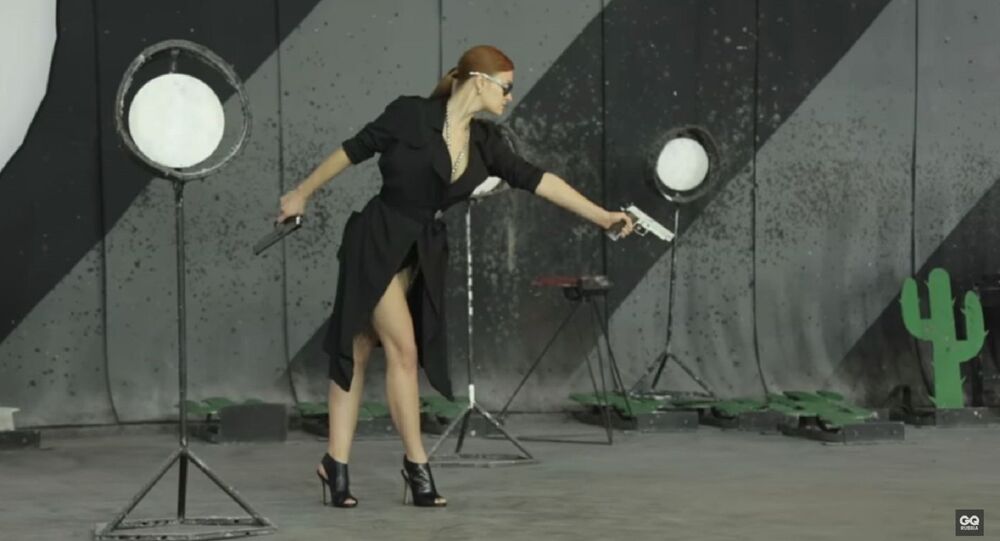 For the past six months, the US public has been fed a series of tales - some of them revealed to be false - about a “spy” from Russia by the name of Mariia Butina.

On Thursday morning, Butina pleaded guilty in federal court to a conspiracy charge over her work as a foreign agent, work she did without filing the required paperwork with the Department of Justice.

Butina pleaded only to the conspiracy charge, not to the charge of having failed to file the proper records.

These are the only two charges that Butina, 30, has ever faced. Western media, however, has almost ubiquitously identified Butina as an alleged spy.

Who is alleging that Butina is spy? Only the media, as it turns out. Prosecutors have not claimed in court, in filings or elsewhere that Butina spied, nor has the FBI in its affidavits. Butina's plea agreement makes no mention of spying either.

Among the outlets that have called Butina an "alleged spy" are CNN, Axios, The Independent, Salon, The Daily Caller, the Los Angeles Times, the New York Post, the Washington Examiner, the Daily Beast, USA Today, Newsweek, The Hill, New York Daily News and many, many more.

In fact, many of those outlets used the term following her guilty plea. Al Jazeera just called her a "Russian spy."

In media, a person is said to be an "alleged" criminal (in other words, accused by prosecutors of a crime) until they are proven guilty either by a judge and jury conviction or a guilty plea. In other words, even after it became acceptable to call Butina an "unregistered agent" in the media, news outlets were still calling her an "alleged spy" in their headlines.

Merriam Webster defines "spy" as either "one who keeps secret watch on a person or thing to obtain information" or "a person employed by one nation to secretly convey classified information of strategic importance to another nation."

The allegations against Butina fall under neither of those categories. Charges of espionage — the crime in the United States that is associated with spying — have not been filed against Butina, and it is unlikely that prosecutors would have failed to file such a charge if they had evidence to support it. (Multiple terabytes of data were seized from Butina after the FBI raided her home with guns drawn.)

In fact, the only spying that occurred in Butina's case was done by the FBI. Prosecutors previously showed pictures in court taken by FBI agents of Butina dining at a DC restaurant, for example.

In other words, rather than being an "alleged spy," Butina was, in fact, the subject of a spy operation.

Butina moved to the US in 2016 on a student visa. Prosecutors even wrote that "all available evidence indicates that Butina had interest in a graduate school education." Butina graduated from American University with a masters degree in international relations in May.

Butina admitted that she took directions from a high-ranking official at a Russian national bank, Alexander Torshin.

Nonetheless, many news outlets, such as USA Today and Raw Story, have claimed that she worked on "behalf of the Kremlin."

The Kremlin, it should be noted, takes a hard line against gun rights in Russia, and Butina and Torshin previously set up a pro-gun lobbying group in their home country. It should also go without saying that one deputy governor of the Central Bank of Russia, i.e. Alexander Torshin, is not "the Kremlin."

Butina had recommended to Torshin a method of creating a dialogue with US President Donald Trump's advisers in November 2016 (after he had won the election). Torshin told her that he did not believe that the Russian Foreign Ministry would "go for it," however.

A number of direct messages sent on Twitter between Butina and Torshin were introduced as evidence in the case. The most frequently cited quote contained in the trove of exchanges is one which came a few days after the 2016 US presidential election, in which Butina said she was "ready for further orders."

Less frequently cited exchanges include ones about Christmas presents for Torshin's children and buying toothpaste in the US.

"Spy-to-spy communications are not done over Twitter. I can guarantee you that. This was either a joke, or it was taken completely out of context," John Kiriakou, a 15-year veteran of the Central Intelligence Agency and host on Radio Sputnik, previously commented.

A number of journalists have also pointed to Butina's notoriety as a reason to treat any allegations of spying against her as dubious. Butina gave speeches and did not shy away from the camera when meeting with powerful members of the Republican Party or while attending National Rifle Association conventions. She also blogged about her work on LiveJournal and wrote about it on social media. Meanwhile, in 2014, Butina was featured in Russia's GQ magazine.

In fact, to the extent that she lobbied in the United States, she did so openly, making her a less-than-ideal candidate for the Kremlin's covert operations in America. Even USA Today reported earlier in the week that because Butina "gravitated toward publicity," former CIA and FBI agents with "decades" of experience in "counterintelligence" are baffled.

This is not the first crime Butina has been falsely accused of by the American media. For example, what was initially the "big issue in the media," in the words of Butina's attorney, Robert Driscoll, was prosecutors' allegations that Butina had traded sex for a position at a special interest organization.

In an August court filing, Driscoll wrote that the claim painted his client as "some type of Kremlin-trained seductress, or spy-novel honeypot character."

The judge in the case, Tanya Chutkan, called the allegation "notorious" and said it had gotten "a lot of attention." Chutkan reviewed the messages that underlined the government's claim that she sought to trade sex for a job. "It took me five minutes to review the evidence and tell they were joking," Chutkan told the government. "It was apparent on its face."

Chutkan said she was "dismayed" and "concerned" that "someone at the US Attorney's Office or at the Department of Justice could look at those exchanges and conclude they were serious."

Butina's guilty plea follows her father's statements that money was running out for her defense at the end of November. She was also assigned a public defender earlier in December. Butina has been subject to solitary confinement for much of her time in jail since July.

On Tuesday, Russian President Vladimir Putin spoke to the question of whether Butina spied for his government. "I asked all the heads of our intelligence services what is going on. Nobody knows anything about her," he said.