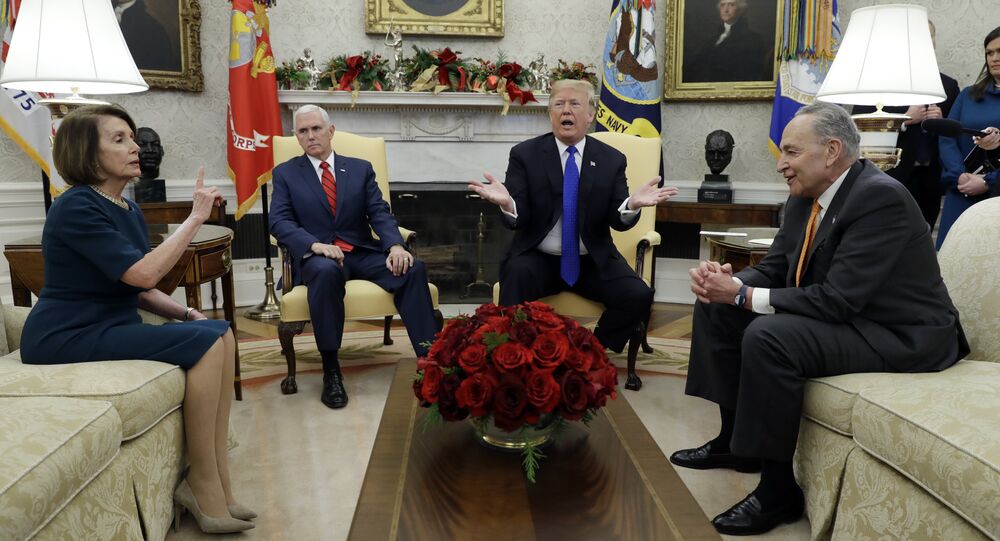 Senate Minority Leader Charles Schumer accused the US President of throwing a “temper tantrum” during the meeting in the White House and asked Senate Majority Leader Mitch McConnell to walk the president back.

Schumer and House Minority Leader Nancy Pelosi engaged in a verbal confrontation with President Trump during the broadcasted meeting in the Oval Office on Tuesday, during which the president said he would take the “mantle” for a partial government shutdown, the Hill reported.

“It is difficult, if nearly impossible, to negotiate with a president in front of the press who peddles such blatant and dangerous falsehoods. And because Leader Pelosi and I simply didn't go along with him, President Trump threw a temper tantrum and promised to shut the government down unless he got what he wanted,” Schumer said from the Senate floor.

© AP Photo / Chairman of the Joint Chiefs
US House Approves Two-Week Stopgap Spending Bill to Avert Government Shutdown
Schumer also called Trump’s remarks “astounding” and accused him of holding the government “hostage” over the border wall and his advisers of keeping him in a “cocoon” of false information.

“Too many, unfortunately, of my Republican colleagues here in the Senate and in the House seem too afraid to tell the president when he's wrong,” Schumer said.

Trump and Republicans are demanding $5 billion for the border, while Democrats say they cannot agree to give more than $1.3 billion.

Schumer added that Trump should accept the offer because, even if there is a government shutdown, it would only last until Democrats take over the House on Jan. 3 and pass their preferred funding bill. He added that Republicans should “help pull the president back from the brink.”

“Leader McConnell says he doesn’t want a shutdown, but he refuses to engage with the president to tell him what’s transparently obvious to everyone else. There will be no additional money for the wall,” Schumer said.

© AFP 2019 / Sandy Huffaker
Trump, Democrats to Talk Border Wall Amid Threat of Partial Gov't Shutdown
He added that McConnell has an “obligation” to walk Trump away from a shutdown and accept the offer as it is now.

McConnell, speaking to reporters after the meeting, warned against a partial shutdown of the government.

“I hope that’s not where we end up. I understand it was a rather spirited meeting,” McConnell told reporters when asked by about Trump’s threat.

Trump earlier threatened a partial government shutdown in case a deal isn't reached by December 21, but Democrats have passed a two-week stopgap spending bill in order to avert such a scenario. In a recent Twitter tirade against the Democrats' reluctance to fund the wall, Trump warned that even if Congress doesn't secure the funding, the US military would still finish the border wall.