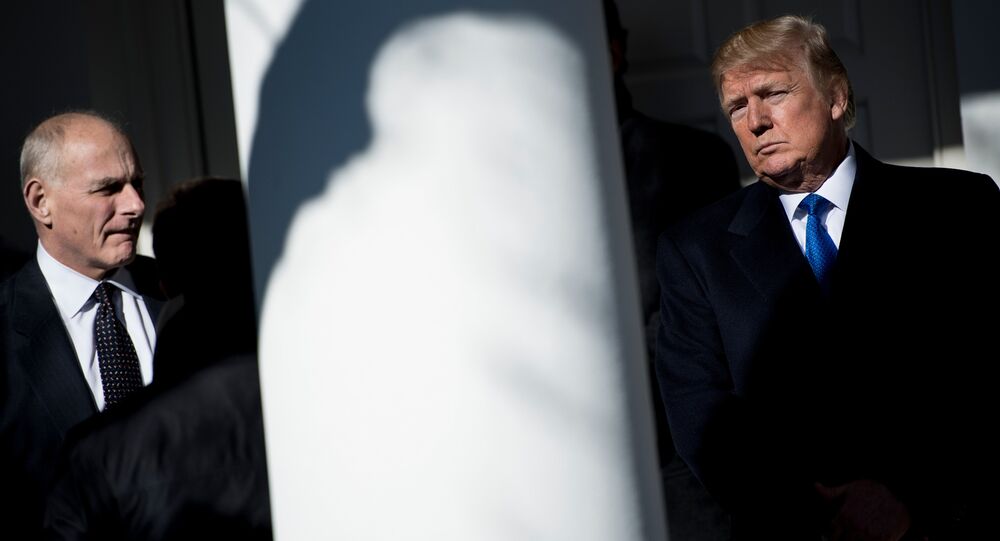 'Titanic's Deck as It's Sinking': US TV Host Volunteers as New WH Chief of Staff

Late-night TV hosts have enthusiastically looked at the White House’s continuous search for a replacement for John Kelly as Trump’s chief of staff.

Following reports on Monday that Donald Trump’s pick to fill the role, Nick Ayers, had turned down the role, Stephen Colbert of the Late Show suggested that he get a front-row seat on a sinking ship. “Who would pass up the chance to spend 10 minutes on the deck of the Titanic while it’s sinking?” he joked.

Seth Meyers also addressed the White House employees’ exodus during a Monday night airing: “People [are] quitting this White House like it’s a Kmart the day before Black Friday”, he said.

But while Colbert expressed eagerness at ironically nominating himself for the soon-to-be-vacant position, Meyers addressed Kelly’s departure in a most straightforward way.

Colbert worked for and supported les moonves. They were close friends!! Who knows what’s in Colbert closet

“I just hope that now that his tenure is over, everyone who hailed him as a paragon of discipline and order when he first took over will look back and admit that they were very wrong”, he ranted.

Meanwhile, on The Daily Show, host Trevor Noah brought up Ayers, the former chief of staff for Vice President Mike Pence, who both rejected Trump’s job offer and announced that he was returning home to Georgia. These two facts were immediately chewed over by the host, who saw quite a bit of irony in their simultaneity.

“So many American [sic] don’t want this job, Trump might have to let a Mexican do it”, said Noah, apparently referring to four other government officials shortlisted by the president expressing non-interest in the role. In response, Daily Show correspondent Michael Kosta decided to follow in Colbert’s footsteps and solemnly nominate himself:

“I got all the qualifications he cares about”, quipped Kosta. “I’m white, I’m male, I’m straight. I can poop standing up. I’m the whole package”, he said, adding that the job is simple. All you’ve got to do is make sure that Trump doesn’t stick his finger in a socket. It’s pretty much daycare, and most of the kids I babysat didn’t die”, Kosta remarked tongue-in-cheek.

Late night tv was at least watchable when they pretended to be non-partisan, now they don't even try.

Some picked up on the news that “nobody wants” Kelly’s job:

Ha Ha! 10 lined up to take Kelly's place…Not.
More like 10 have already run in the opposite direction!
Nobody wants to be Trump's babysitter when he's smacked with Mueller's indictments. https://t.co/RD3zHG3ypw

You are the only crazy one, if they are yes men, you praise them, if they don't do what you want, you get rid of them. Nobody really wants to take Kelly's place, because they know you will get rid of them soon.

US President Donald Trump announced the other day that his chief of staff, General John Kelly, would resign at the end of the year, following multiple rumours spread to this end in the media in wake of the US midterm elections.

On Friday, CNN reported, citing two unnamed sources familiar with the situation in the White House, that tensions between the president and Kelly had reached a point that the two had not spoken to each other for days. According to the media outlet, top contenders for the high-profile post include Vice President Mike Pence’s Chief of Staff Nick Ayers, though no final decision about a replacement has been made.

Along with the chief of staff, the now vacant position of Attorney General is expected to soon be filled to replace outgoing Jeff Sessions. Also, last week, State Department spokeswoman Heather Nauert was picked by Trump as the new US Envoy to the United Nations, instead of outgoing UN Ambassador Nikki Haley, who abruptly announced her resignation in early October.