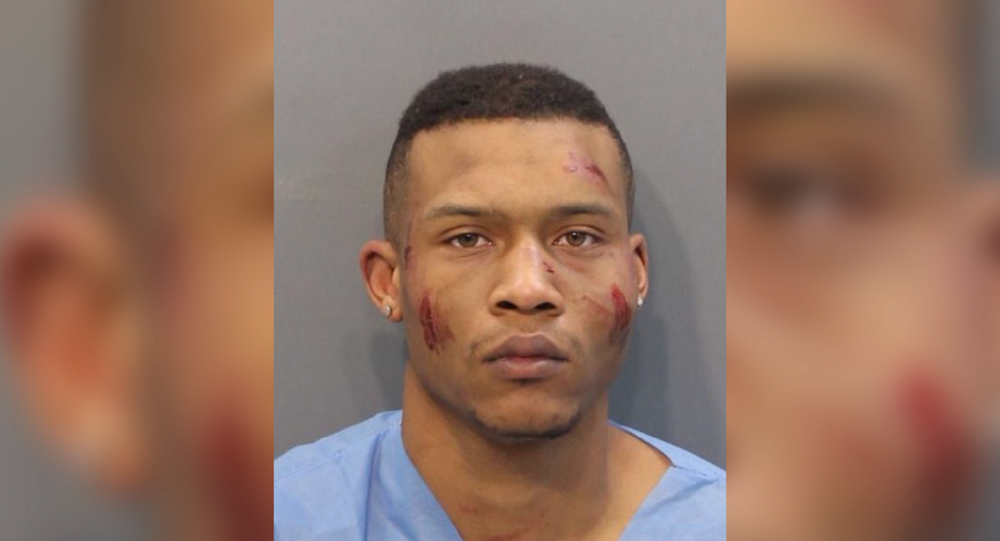 WATCH: US Rapper Says Cops Targeted, Beat Him Over His Music

A Tennessee sheriff’s department has vowed to investigate after a viral video showed one of its officers kicking and punching a local rapper called Interstate Tax.

The man, whose real name is Charles Toney, 24, but who also goes by Ace Boogie, was arrested on Monday, October 3 on several warrants, according to the Hamilton County Sheriff's Department.

Toney is charged with resisting arrest, assault, tampering with or fabricating evidence and obstruction.

The sheriff's department's internal affairs division is conducting an investigation, as is the NAACP, and the local district attorney's office will decide if another police agency should probe the matter, presumably to avoid a conflict of interest.

"I got a collapsed lung, broken finger, broken nose and broken ribs," Toney posted on Facebook alongside the video of the encounter.

He said the officers jumped out of unmarked vehicles, asked him if he was Interstate Tax and immediately beat him and put a gun to his head. "They told me they was gonna beat me so everybody could see me after the deal," he said a few days later on a local radio program.

The woman who recorded the video, Qualeka Alquadri, who lives next door, gave a similar account of what happened as Toney, saying she saw police swarm him. "First, when he [a police officer] came, he was like ‘[are] you Interstate Tax?' He led off with a punch and then threw him on the ground; that's when I started recording," she told local media.

Sheriff Jim Hammond contends that Toney did not require hospitalization, however, video live-streamed by Toney on Sunday shows him in a hospital complaining of headaches and with marks and bruises on his face. Toney tells a hospital worker that he was previously scanned, presumably for concussions, but that the doctors didn't see anything.

"We have not have not obtained a copy of the video [of the arrest]. We understand there's more than what was seen on the media," Hammond said at a press conference on Monday.

The sheriff said that there were multiple police agencies on scene, including some officers from his office, one of whom has been placed on limited duty. That officer is Detective Blake Kilpatrick, who is the one seen beating Toney.

"This was a task force, by the way, where we do roundup on felony warrants," the sheriff said during a live-streamed joint press conference with the local chapter of the NAACP.

"When this incident occurred a few days ago, I saw the video [and] was very disturbed, to say the least, of what took place. This is not the first incident that has transpired here in our area," Hamilton County Commissioner Katherlyn Geter said at the press conference with the sheriff and NAACP.

"I just want the community to know that as soon as I found out about it, and as many calls, I've received since the incident, I immediately got on the phone with Sheriff Hammond. He and I talked extensively about what to do and when to do it," Elenora Woods, president of the Chattanooga chapter of the NAACP, said at the conference.

The NAACP will work with the sheriff's department to "make sure that justice is served in this incident," she said. "We don't know all the full details right now, but we can assure you that we will not rest if injustice has occurred. If it has occurred, we will be on top of it."

Woods assured everyone that Hammond will handle things "according to the law and by the book."

The NAACP and police say that they have not been able to contact Toney or other witnesses.

Another video from Wednesday shows Toney on a local radio program in Chattanooga alluding to what happened. The show host notes that Toney came on despite his "collapsed lung."

Toney explains that he is in a little bit of pain. The host says that "Tax" was supposed to be on her show on Monday but had been beaten up "really bad" by the police.

"I have two broken ribs, a collapsed lung, a broken finger, my nose is fractured," he told the host.

"They wanted to break me, and I wasn't going to let them do that. They didn't come at me on the warrant that I had, they came at me with this music, [saying] ‘Are you Interstate Tax? We don't like your music. We don't like you,'" Toney said

"They said they was at my video shoots the day before," he added.

Toney said his father is incarcerated, and so he wasn't surprised the police were targeting him now.