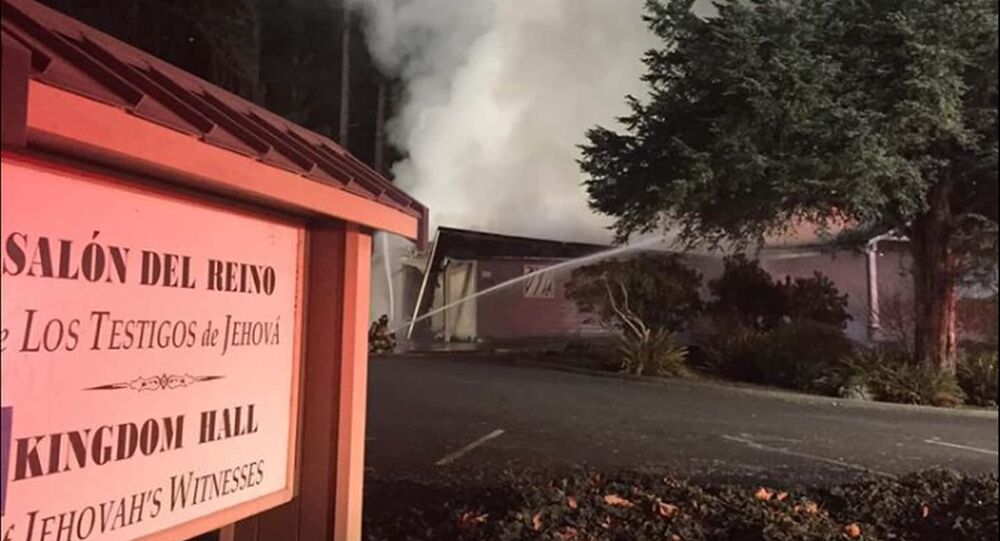 A total of five Jehovah’s Witnesses’ places of worship reportedly ended up becoming a target of suspected arson attacks in the state of Washington, with someone also firing about 35 rifle rounds into one of the Kingdom Halls in a separate incident.

A Jehovah’s Witnesses'* place of worship being torched in the city of Lacey became the fifth such suspected attack to occur in Washington state during the last nine months, NBC News reports citing its local affiliate KING-TV.

According to the media outlet, the previous fires occurred in "Olympia, Tumwater, and Yelm between March and August", with two of the fires causing “minor damage” while a blaze on July 3 destroyed the Olympia Kingdom Hall.

BREAKING: A fire has destroyed the Kingdom Hall of Jehovah’s Witnesses in Lacey. This is the SIXTH attack on Kingdom Hall’s in Thurston County since March. Five fires, one shooting. pic.twitter.com/J8Ss9BW0Qv

​Also, someone reportedly fired 35 rifle rounds into a Yelm Kingdom Hall in May.

As Thurston County Sheriff John Snaza explained, no suspect has been identified yet.

"How frustrating is it that people who find a solemn place of worship — now it’s being destroyed", he remarked.

This development left a number of Twitter users aghast.

This is religious intolerance gone bad.

Freedom of religion isn't just a political rhetoric it's a human right.

Some however appeared amused by the incident or used it as an opportunity to express their negative opinion of the religious group.

Thank goodness all the parishioners were out knocking on doors and harassing people as usual.

I wonder if Jehovah witnessed it and did nothing!

Why don't they just pretend they're not home like the rest of us?

That's what you get when you call people, mail them your propaganda and bother the shit out of us.
Sorry it happened, now leave us in peace.

Established during the late 19th century in the United States, Jehovah’s Witnesses is a Christian religious group known for its door-to-door preaching, distributing religious literature, refusing blood transfusions and rejecting subservience to the state, which manifests in them refraining from voting or serving in the military.

The group is governed by the Watch Tower Bible and Tract Society of Pennsylvania headquartered in Warwick, New York, and counts over 8 million people as its members.

*Jehovah's Witnesses are outlawed in Russia