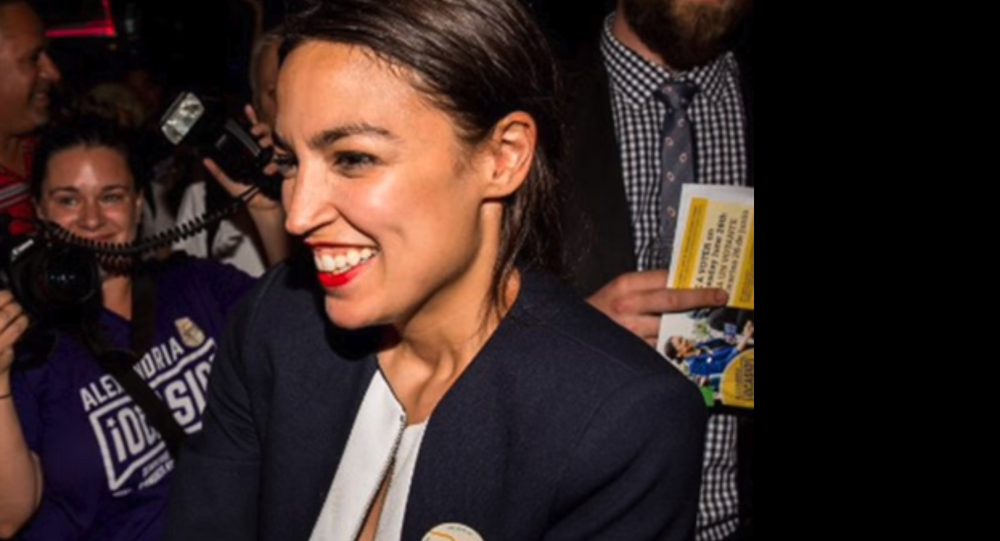 Alexandria Ocasio-Cortez is the youngest woman ever elected to Congress. She became a US Representative after this year's mid-tem elections, receiving 78% of the vote.

Donald Trump's oldest son shared a meme featuring photos of the incumbent US president and Rep. Ocasio-Cortez, where the latter asked the president about his fear of a socialist economy. Trump answered by saying that "Americans want to walk their dogs, not to eat them".

Alexandria, who identifies herself as a Democratic Socialist, was recently elected to Congress, where she will represent New York's 14th congressional district. In the run-up to the mid-terms, she shocked many politicians when she defeated veteran Democratic Rep. Joseph Crowley.

In June Ocasio-Cortez beat Joseph Crowley, who had been in the House of Representatives since 1999 and hadn't had an opponent in the primaries since 2004, according to Boston.

Challenger @Ocasio2018 toppled one of the top Democrats in Congress, @repjoecrowley, Tuesday night in their primary in the 14th District. The victory stunned even her, live on our channel. #NY1Politics https://t.co/fnK1O0bacz pic.twitter.com/RjuqHJpn1p

Before Ocasio-Cortez became a US representative, she was working as a bartender in a New York bar, helping her mom make ends meet.

Less than a year later, she defeated the likely next Speaker of the House, and will almost certainly be the youngest woman ever elected to Congress pic.twitter.com/JgHjdQWAF6

Ocasio-Cortez is often compared to incumbent US President Donald Trump, except that she is described as the "left's Trump".

President Donald Trump commented Joseph Crowley's loss in the New York primary, tweeting that former Rep. Crowley "should have been nicer, and more respectful, to his President!"

Ocasio-Cortez, during an appearance on "The Late Show with Stephen Colbert", fired back at Trump over his tweet, saying that she doesn't "think he knows how to deal with a girl from the Bronx."