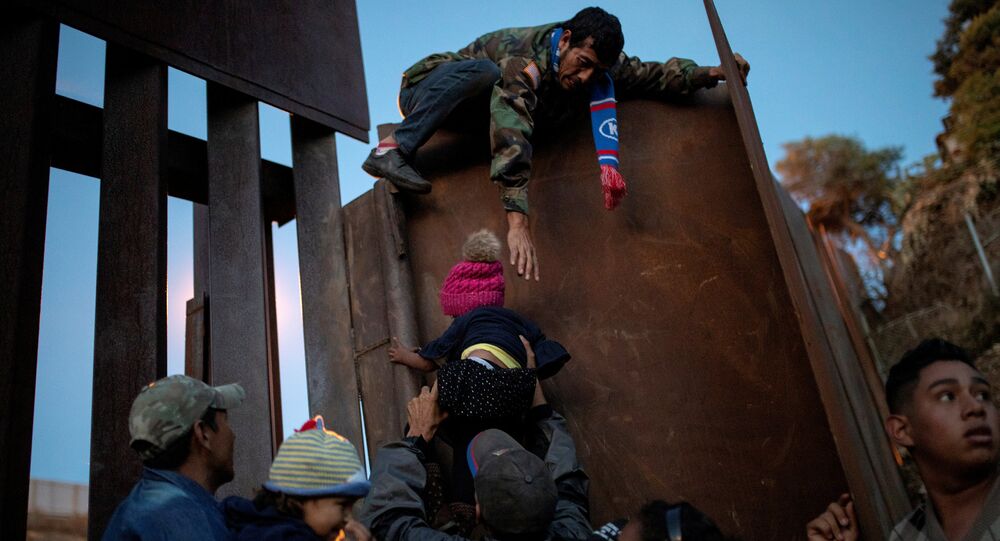 Woman Illegally Scales Mexican Border to Give Birth in US

Despite increased security at border crossing points, the 19-year-old mother-to-be managed to climb over the US-Mexico wall, but ended up under border agents’ scrutiny after she delivered a son at a local hospital.

A Honduran woman is believed to be the first member of the migrant caravan to deliver a baby in the United States and now hopes her son will gain American birth right citizenship, which Trump threatened to put an end to in October.

At the time, the issue was centred on Trump’s potential executive order to this effect; however, many argued a constitutional amendment was needed.

Maryury Elizabeth Serrano-Hernandez, 19, was over 7 months pregnant when she left Honduras, along with her 20-year-old husband, Miguel Ortiz, and their three-year-old son, covering an estimated 2,000 miles on foot.

As they finally crossed into Tijuana and were given space at the makeshift camp, Serrano-Hernandez and her husband say that, as cited by US media, they had multiple security concerns after being surrounded by Mexicans who weren’t happy about their arrival, which prompted them to attempt to cross the US border illegally, near the main checkpoint in Sand Diego.

Met by three border guards after they finally made it over the border, they refused to return and were taken to the Imperial Beach Station to straighten out asylum formalities, and this is where Serrano-Hernandez felt the abdominal pain indicating labour, which she initially took for an emotional disorder.

The hospital ward was encircled by immigration officials, who closed all the windows and, according to Serrano-Hernandez’s husband, attempted to place handcuffs on the new mother after she gave birth, as well as examined food that was brought in by nurses. The hospital staffers reportedly gifted the family clothes, diapers and baby wipes, but Ortiz said that as soon as they returned to the San Diego detention centre, the presents were confiscated.

The controversy at the Mexican border has fuelled a large-scale debate across the country, as hordes of newcomers from Central America reached Mexico in the hope to cross into the US “in pursuit of happiness”, as the US Constitution reads. President Trump referred to the caravan of migrants as “an invasion” by “aliens”, stressing that many of them are rogues implicated in aggravated crimes and are ready to wreak havoc in his home country instead of pursuing the American dream.

Separately, according to a statement by Tijuana's health department, migrants from the caravan currently staying in the Mexican city and awaiting entry into the US are suffering from all kinds of illnesses, ranging from ordinary respiratory infections, to dangerous diseases such as tuberculosis and HIV/AIDS, with those having health issues amounting to 1/3 of the total.

To sort things out at the border, the US president ordered to step up security at border checkpoints, with about 5,600 troops currently stationed in Texas, Arizona and California.  Some of the military personnel in California have been helping Border Patrol put concertina wire and set up concrete barriers at border crossing points, something which defence chief James Mattis said is nearly completed.