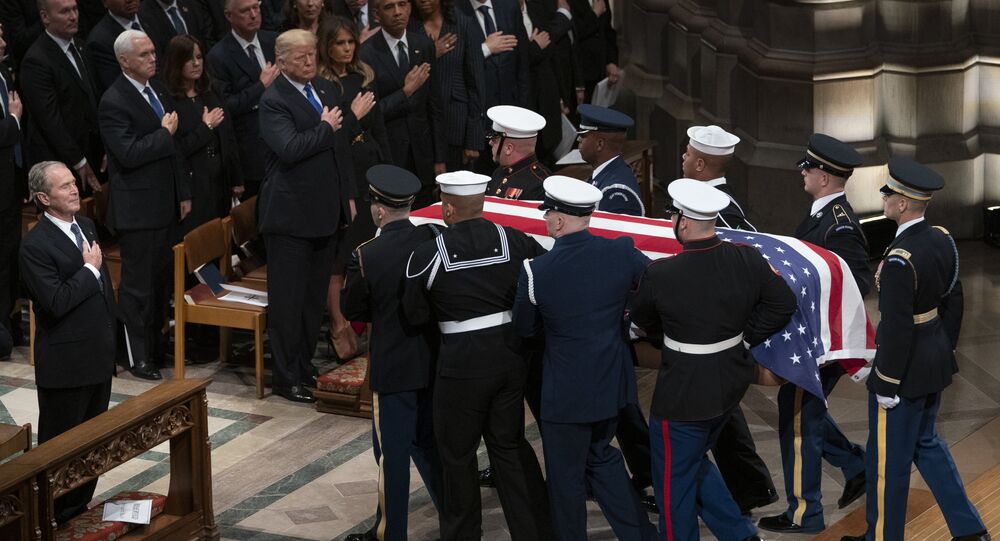 On Wednesday, a funeral service for former US President George H.W. Bush took place at the Washington National Cathedral in Washington, DC, after the president lay in state in the US Capitol Building for three days of public viewing.

Bush, who served as the 41st president of the United States from 1989 to 1993, died at the age of 94 on Friday. In late April, he was taken to hospital with an infection that spread to his blood, soon after the funeral of his late wife, Barbara Bush. He was suffering from Parkinson's Disease and couldn't walk on his own, instead relying on a wheelchair and a walker.

© AP Photo / Andrew Harnik, Pool
The flag-draped casket of former President George H.W. Bush is carried out by a military honor guard during a State Funeral at the National Cathedral

"The best father a son or daughter can have,'' Bush said during his 12-minute speech, his voice breaking. He concluded by asking attendees to take comfort in knowing "dad is hugging Robin and holding mom's hand again." Robin is George's sister, who died from leukemia at the age of three in 1954.

"He was no cynic," Bush said. "He looked for the good in every person, and he usually found it."

"He was born with just two settings: full throttle, then sleep," he added. "To us, his was the brightest of a thousand points of light… When the history books are written, they will say that George H.W. Bush was a great president of the United States."

In his eulogy, Meacham referred to the former president as "the last great soldier-statesman" and "our shield" in bad times, while Mulroney praised Bush as a world leader who helped establish the foundations for the North American Free Trade Agreement (NAFTA) with Canada and Mexico. Simpson recalled stories from his years of friendship with the former president, adding, "you would have wanted him on your side."

US President Donald Trump and former presidents Barack Obama, Bill Clinton and Jimmy Carter were all at the funeral Wednesday to bid farewell to Bush.

When Trump arrived at the funeral, he shook hands with the Obamas and sat down next to them, although he did not acknowledge the Clintons, who were sitting on the other side of the Obamas. The Trumps also didn't greet Carter and former First Lady Rosalynn Carter.

After the service, Bush's remains were flown back to Houston for a private funeral to be held at St. Martin's Episcopal Church on Thursday. The former president will be buried next to his wife and daughter at the Bush Presidential Library on the campus of Texas A&M University in College Station, located about 100 miles northwest of Houston.

The Forty-First: Life and Career of George H W Bush